In the Battle Against Corruption, the West Must Support Ukraine 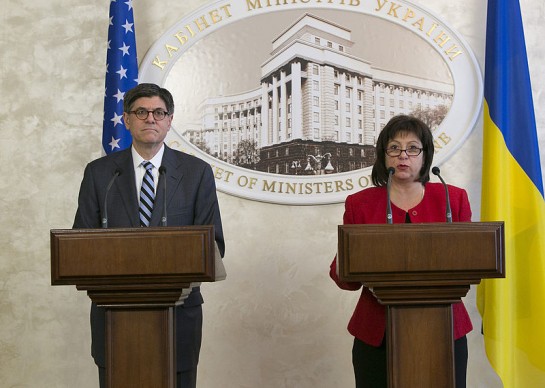 WASHINGTON, D.C.-- Ukraine is getting plenty of bad press, from Russian-sponsored rebels prolonging the war in the country’s east despite the Minsk accords to heated disagreements in Parliament. But behind the scenes, another battle rages within the country’s political system. Though it draws fewer headlines than the others, the fight for reform may be the most crucial battle of them all.

The conflict over Ukraine’s reform agenda may appear to be a matter of arcane legislative disagreements, but the stakes could not be higher. At its core, the reform process reflects the same dynamics that drove so many protesters to the Revolution of Dignity on the Maidan.

This is the battle between the old guard and the new, between bureaucrats’ entrenched ways of doing things and the reformers who envisioned something better: A transparent, accountable, and Western-looking Ukraine.

Ukraine has seen no more stalwart reformer than its tireless Finance Minister Natalie Jaresko. Since she took office in December 2014, Jaresko has been the public face of the Ukrainian reform effort. With her extensive experience in both financial institutions and government, Jaresko has been a trustworthy bridge to the West.

Her accomplishments are substantial: most notably, the successful restructuring of Ukraine’s debt and her negotiations with the IMF to secure loan guarantees in exchange for structural reforms. The news that Jaresko may be chosen to lead a new, technocratic government should be welcomed by all who hope to see a free and modern Ukraine.

In the picture: Jacob Lew, United States Secretary of the Treasury and Natalie Jaresko, Finance Minister of Ukraine in Kyiv 28 January 2015

Still, the reform agenda cannot fall to one person alone. The National Reforms Council, chaired by Dmytro Shymkiv, has done an impressive job of bringing together stakeholders from the government, parliament, business and civil society to chart the country’s path forward. Too often, this work has gone unnoticed.

According to the Council’s 2015 annual report, 73% of over 200 decisions approved by the council found their way into law in 2015. This level of productivity would be the envy of the U.S. Congress or indeed any major democracy, let alone one that is simultaneously fighting an insurgency within its borders.

It is worth taking stock of the progress made thus far. In the energy sector, Ukraine is weaning itself off Russian gas, purchasing 63% of its imported gas from the EU last year. Meanwhile, the state-owned company Naftogaz of Ukraine is being restructured in line with Western standards, and the discrepancy in energy tariffs between private consumers and industry—long a budget-busting source of corruption—is being addressed.

More broadly, governance is improving. Judicial reforms have been introduced via constitutional amendment to evaluate judge performances and incomes. Public procurement is now more transparent, with state-owned enterprises required to disclose procurement online. Payroll taxes have been cut, 65 banks have been shut down, and a new class of Ukrainian traffic police has been rolled out in 10 cities, giving the Ukrainian public a new face for law enforcement.

All of these reforms represent tangible progress, and should be applauded far more than they have been. Still, there is also ample room for concern. The public resignation in February of the reform-minded Economy Minister Aivaras Abromavicius, suggests that some reformers were being stymied by industrialists in the gray power structure. In the wake of his resignation, ten western ambassadors took the unusual step of writing a letter supporting Abromavicius and lamenting his loss in the government.

The case of Abromavicius shows that the reform effort still has a ways to go—but it also shows the role other countries can play in helping Ukraine get there. Western democracies cannot afford to sit on the sidelines and simply hope that Ukraine course-corrects on its own, but should instead actively encourage the government to do so through a combination of carrots and sticks that reward Ukraine when it takes concrete steps to reform and holds it publicly accountable when it backslides.

The United States has led this charge, with Vice President Biden making frequent trips to Kyiv to engage Ukraine’s leaders. But it is vital that other countries’ leaders also take a personal stake in Ukraine’s future and continue this one-on-one engagement to help Ukraine stay on track.

If Minister Jaresko becomes Prime Minister, Ukraine may have its best chance to enact a reform agenda. According to local reports, she has hand-picked a number of reformist officials she would like to join her in leading the government, including Dmytro Shymkiv, Boris Lozhkin, and Yuliya Kovaliv. These appointments would send a promising signal that Ukraine is serious about bringing the ideals of the Maidan into the highest levels of its government.

But the effort cannot stop there. Minister Jaresko and her team will face a monumental task in confronting the entrenched power structures and special interests in Kyiv. A full-fledged reform effort will demand substantial cooperation from different factions in Parliament, and the influence of the West could help Ukraine progress along its path toward reform. This is a battle that Ukraine cannot afford to lose, because it may well decide the country’s fate—and that means the West cannot afford to lose it either.

Sally Painter is a board member of the Truman National Security Project and COO of Blue Star Strategies.
LINK: http://trumanproject.org/doctrine-blog/in-the-battle-against-corruption-the-west-must-support-ukraine/