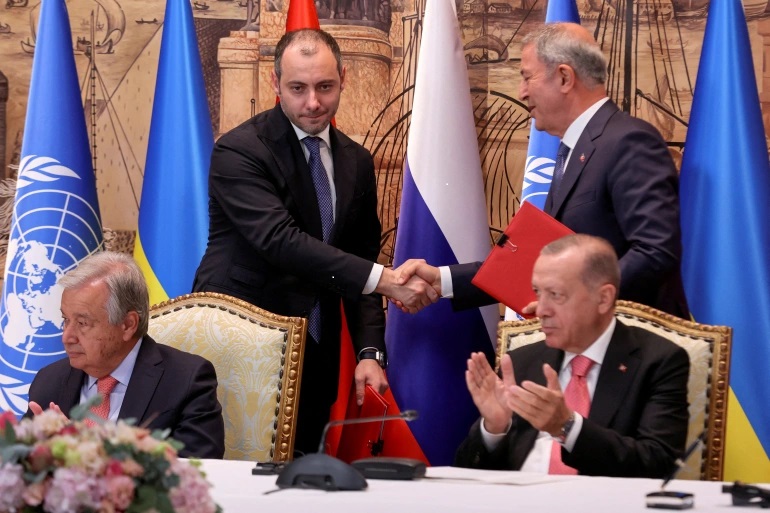 Copy of agreement and analysis from Atlantic Council found below 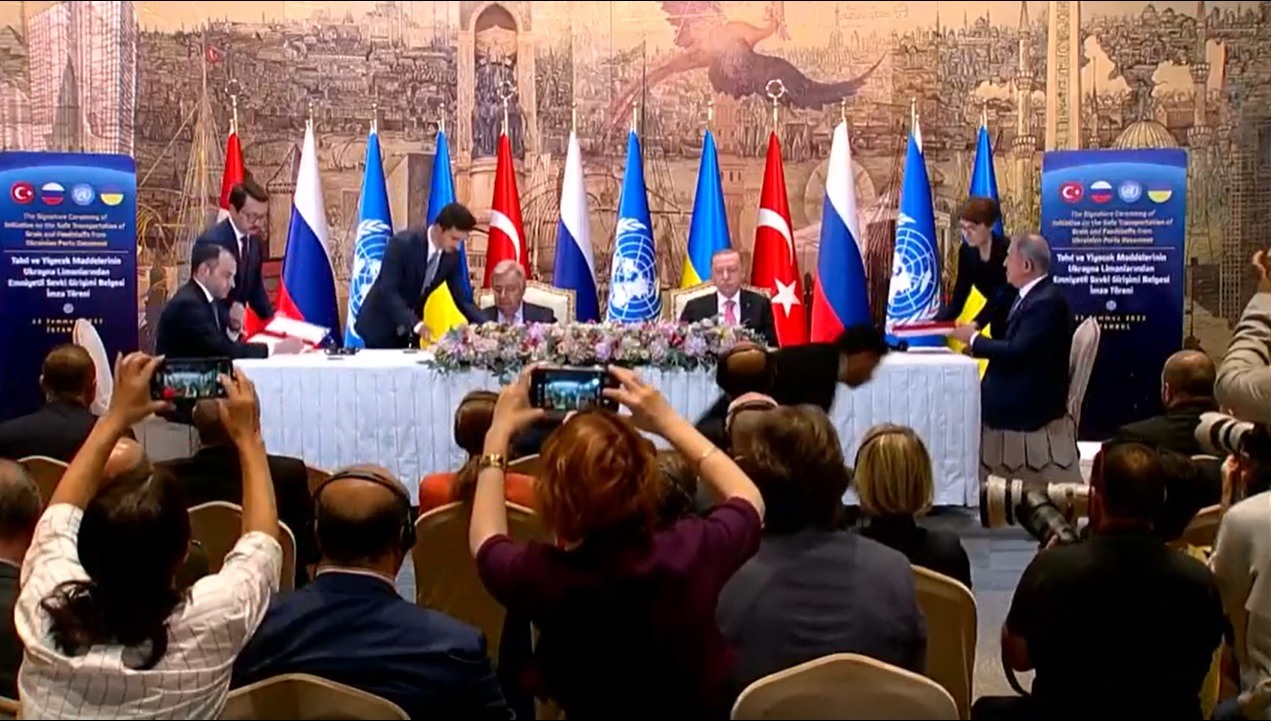 ISTANBUL — Russia and Ukraine agreed Friday to restart shipments of blockaded grain, in a step toward easing a global crisis that has exposed tens of millions of people, especially in Africa and the Middle East, to the threat of acute hunger, the U.N. secretary general announced.

One of the two agreements signed Friday in Istanbul, brokered by the United Nations and aided by Turkey, guarantees the safe passage of commercial ships from the Ukrainian port of Odessa and two other ports, which are currently cut off by a Russian naval blockade. A parallel agreement is supposed to facilitate Russian grain and fertilizer exports, they said.

The grain agreement is in force for a period of 120 days, and is renewable, according to the text of the agreement posted on the Facebook page of Andrii Sybiha, the deputy head of Ukrainian President Volodymyr Zelensky’s office.

Before Russia’s invasion of Ukraine in late February, the two countries were among the world’s top producers and exporters of grain, cooking oil and fertilizers. Last year, Ukraine accounted for 10 percent of global wheat exports, according to the United Nations. More than 20 million tons of grain have been stuck in Ukraine’s Black Sea ports, causing worldwide shortages and fears of worsening hardship to come.

In a sign of the sensitivities weighing on the deal, representatives from Russia and Ukraine did not sit down together at the Istanbul ceremony, which was presided over by U.N. Secretary General António Guterres and Turkish President Recep Tayyip Erdogan.

“We did not reach this point in an instant,” said Erdogan, whose government maintains close ties with both Ukraine and Russia. He called the negotiations to reach an agreement “intense and arduous.”

And for all the complexity involved in the negotiations, the grain agreement appeared to depend on goodwill that is in short supply, resting in large part on Russian assurances it would not attack merchant ships or port facilities involved in the initiative. Even so, officials expressed optimism.

“Today, there is a beacon on the Black Sea,” Guterres said at a signing ceremony for the initiative. “A beacon of hope, a beacon of possibility, a beacon of relief, in a world that needs it more than ever.”

Sybiha called the initiative “an important step to avoid the global food crisis,” in a message posted on Twitter.

Defense Minister Sergei Shoigu, the Russian signatory, said Russia would not seek any military advantage from the reopening and demining of Ukrainian ports to enable the grain shipments. “Russia has assumed the obligations which are quite clearly spelled out in this document. We will not take advantage, in this instance, of the ports being demined and opened,” he said in a speech on state-owned Rossiya 24 television channel. He expected grain transport to begin “in coming days.” He said the deal would contribute to resolving the global food security problem.

The agreements were the fruit of conversations Guterres had with the leaders of Ukraine and Russia in April to solve the spiraling food crisis. Turkey, which maintains good ties with both countries and controls passage through the Bosporus, the entrance to the Black Sea, took an active mediating role.

For months the discussions stumbled in a sign of absent trust between the warring parties. Ukrainian diplomats complained that their security concerns were not being acknowledged, as Russia downplayed the scope of the global food crisis. Ship insurance underwriters had to be assured that vessels would not be attacked, struck by mines or face other hazards in an active war zone. 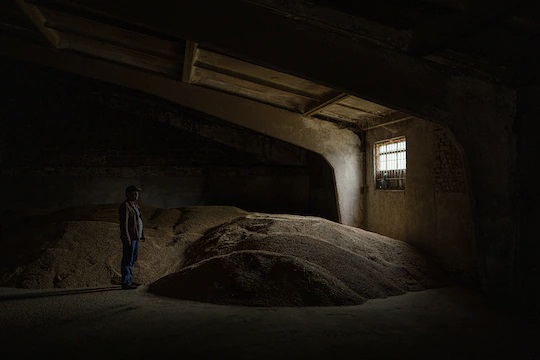 The 100 tons of grain that Volodymyr Onishchuk didn't ship before the Russian invasion of Ukraine, in Bashtanka, Ukraine, on June 24. (Serhiy Morgunov)

U.N. officials said the deal over Ukrainian grain shipments rests on a complex regime that establishes safe channels through the Black Sea and inspections to ensure that weapons are not sent to Ukraine through those channels. Despite early speculation, there is to be no large-scale demining of Ukraine’s ports, a process that was considered too time consuming. Ukrainian pilots will guide commercial vessels from the ports. Minesweepers will be used as needed, officials said.

There would be no military escorts of the ships, whose passage will be monitored from a coordination center in Istanbul staffed by representatives of the parties to the agreements. In addition to Odessa, the agreement covers shipments from the ports of Chernomorsk and Yuzhny, Guterres said.

A parallel agreement is supposed to facilitate the export of grain and fertilizers from Russia, though its utility was unclear: Those commodities are not subject to U.S. or European Union sanctions. A second U.N. official said they hoped it would help bring down soaring costs of fertilizers that could impact yields for the next harvest. Both U.N. officials spoke on the condition of anonymity because when they spoke the agreements had not yet been signed.

Mykhailo Podolyak, an adviser to Ukraine’s president, said in a Twitter message posted Friday afternoon that Ukraine was not signing a direct agreement with Russia, but rather with Turkey and the United Nations. Russia would sign a “mirror” agreement, he said.

And there would be “no presence” of Russian representatives in Ukrainian ports, he said. “In case of provocations,” he added, “an immediate military response.”

The announcement comes as countries around the world and particularly in East Africa have been struggling to feed themselves. A group of seven East African nations, including Somalia and South Sudan said Friday that 50 million people in their countries are facing acute food insecurity this year while some 300,000 teeter on the edge of famine.

Mercy Corps, the relief organization, said in a statement that while the agreement could help ease grain shortages, “this will not end or significantly alter the trajectory of the worsening global food crisis.”

“Unblocking Ukraine’s ports will not reverse the damage war has wreaked on crops, agricultural land and agricultural transit routes in the country,” the group said. “We must recognize that our global food systems were already failing and record numbers of people were edging toward poverty and hunger due to the economic pummeling of the COVID-19 crisis and the impacts of climate change.” 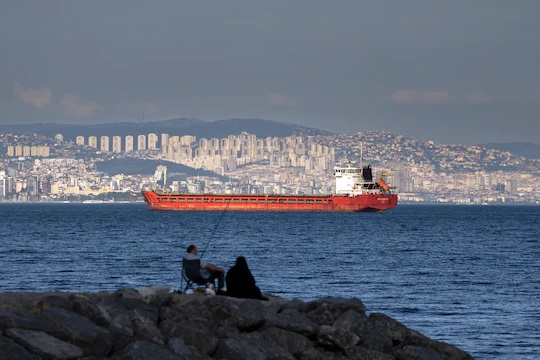 A family sits on a rock in front of a cargo ship anchored in the Marmara Sea and awaiting access to cross the Bosporus Straits in Istanbul on July 13. (Khalil Hamra/AP)

NOTE: Kareem Fahim is the Istanbul bureau chief and a Middle East correspondent for The Washington Post. He previously spent 11 years at the New York Times, covering the Arab world as a Cairo-based correspondent, among other assignments. Kareem also worked as a reporter at the Village Voice.

Agreement,
Signed by Oleksandr Kubrakov, Minister of Infrastructure of Ukraine,
Hulusi Akar, Minister of National Defence of the Republic of Turkiye,
and Antonio Guterres, Secretary-General of the United Nations
(posted on the Facebook page of Andrii Sybiha,
the deputy head of Ukrainian President Volodymyr Zelensky’s office) 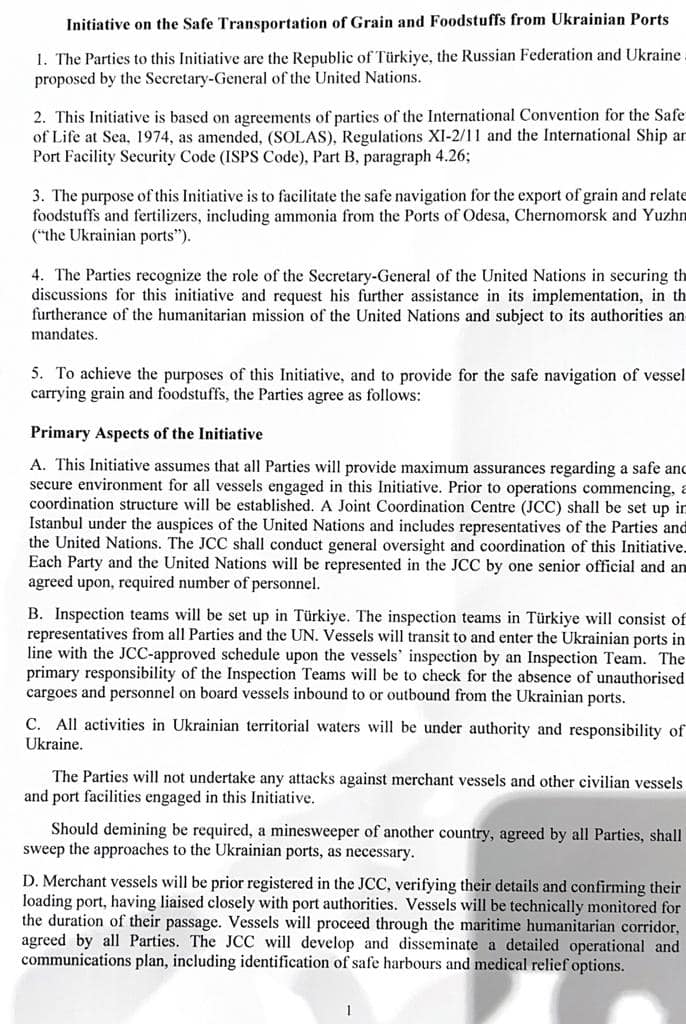 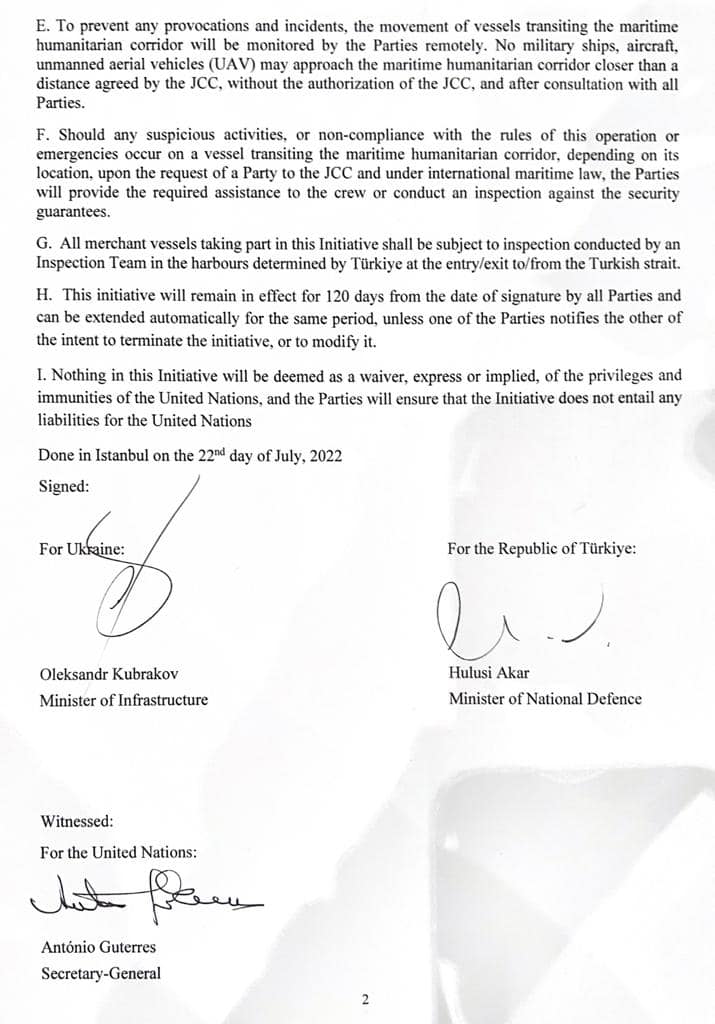 Additional coverage on the signed Agreement:

Ukraine can feed the world again. But at what cost?
Everything you need to  know about the deal to unblock Black Sea grain exports
Atlantic Council, Fast Thinking
Wash, D.C., Fri, Jul 22, 2022

The world’s breadbasket is back. Russia and Ukraine signed separate deals with the United Nations and Turkey in Istanbul today that will unblock commercial exports from three southern Ukrainian ports including Odesa—where more than twenty million tons of grain have been held up amid Russia’s invasion of its neighbor. It’s a promising development far beyond just the Black Sea, allowing countries dependent on Ukrainian grain to breathe a sigh of relief following fears of a mounting global food crisis. But how fragile is this wartime deal? And what did Ukraine really gain?

Read Everything you need to know about the deal to unblock Black Sea grain exports: https://www.atlanticcouncil.org/content-series/fastthinking/ukraine-can-feed-the-world-again-but-at-what-cost/

The United Nations, the Republic of Turkey, Ukraine, and Russia have committed to a plan for resuming Ukrainian exports through the Black Sea and getting millions of tons of Ukrainian grain to those who need it around the world. The United States welcomes this deal and commends UN Secretary-General Guterres and Turkish President Erdoğan for their committed diplomatic efforts to mediate these discussions. Today’s UN-brokered deal is a positive step towards addressing the far-reaching impacts of Russia’s war. The international community must now hold Russia accountable for this deal, ending its effective blockade of Ukraine’s ports and ensuring Ukrainian agricultural goods — including grain, oilseeds, and sunflower oil — reach world markets.

Russia has weaponized food since the beginning of this crisis. An end to Russia’s blockade of Ukraine’s agricultural exports through the Black Sea is, therefore, only one of the many steps Russia needs to take to ensure that food from Ukraine makes it to global markets. Global food security will remain at risk for as long as Russia continues its unjustified and brutal aggression against Ukraine.

The world’s hungry cannot wait, and we expect the implementation of today’s deal to commence swiftly and proceed without interruption or interference.