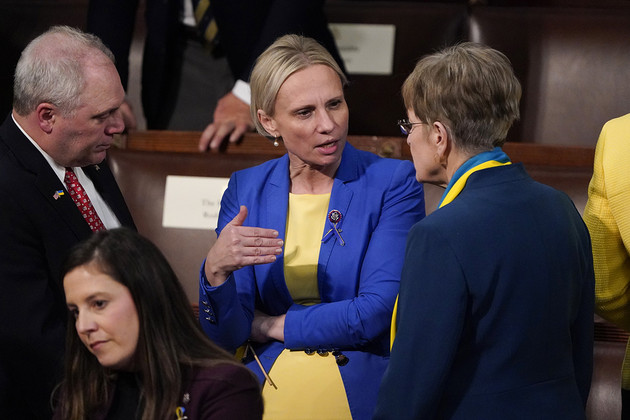 The State of the Union is a distinctly red, white and blue affair. But blue and yellow were also a prominent color scheme in Tuesday’s address as lawmakers express sartorial solidarity with Ukraine.

Rep. Victoria Spartz (R-Ind.), a Ukrainian-American who was born in Ukraine, wore a yellow dress with a blue blazer.

Several members were wearing scarves in either of the two colors on Ukraine’s flag, while others carried miniature flags reportedly being handed out by Rep. Brian Fitzpatrick (R-Pa.), a co-chair of the congressional Ukraine and Ukrainian American Caucus.

First Lady Jill Biden was among those wearing blue, and one of her guests was Oksana Markarova, Ukraine’s ambassador to the U.S. Early in his address President Joe Biden directed attention to Markarova and led the room in an extended standing ovation in honor of Ukraine.

“We the United States of America stand with the Ukrainian people,” he said.

A few people also wore flag stickers or ribbons on their lapels as part of the symbolic display of support for the embattled nation. House Speaker Nancy Pelosi had on an interlaced U.S.-Ukraine flag pin, and House Minority Leader Kevin McCarthy had a pin and the Ukranian colors as a pocket square.

It has been something of a trend in recent years for members of Congress to color-coordinate their attire to the high-profile event in order to make a political statement.

Female Democratic lawmakers on a couple of occasions during the presidency of Donald Trump donned white — a color associated with the suffragist movement — and in 2018 a group of them wore black in response to the #MeToo movement highlighting the pervasiveness of sexual harassment.