KYIV, 2 FEBRUARY 2017. Recently the Consumer Electronics Show (CES 2017) has brought together more than 3,800 companies from over 150 countries exhibited a wide range of technologies. Many of this year’s themes echoed last year’s – Internet of Things (IoT), drones, virtual reality, artificial intelligence and connected cars. However, this year marked a notable transition from prototypes and trial products to real-life devices with practical applications that hold the promise of bringing real change to the way we live.

EY’s Global Technology, Media and Telecom sector was strongly represented at several СES events where our specialists shared their insights and engaged in meaningful discussion. The role of consumer experience in TMT growth and digital opportunities in the rapidly evolving media landscape were the main topics of discussions.

Alexander Romanishyn, Leader of EY start-up Accelerator, Transaction Advisory Services, EY Ukraine comments: “I am pleased to mention that more than 10 companies from Ukraine took part in the CES this year. Some of them were supported by the UVCA, and there were those who participated directly. It’s expected that there will be more companies from Ukraine on the next exhibition. We currently cooperate with several projects in the area of the IoT, fintech, virtual reality, SaaS, and artificial intelligence through providing support with a range of business issues including go-to-market and expansion strategy, financial modeling, fundraising, tax optimization and legal structuring.

We also hope that in the nearest future more international companies will establish their research and development centers in Ukraine. Our country has significant potential for technology development such as IoT, SaaS, VR and AI, as well as a number of competitive advantages for the opening R&D outlets for international startups and mature companies: high-skilled IT-professionals and cost saving – by conservative estimates cost of R&D facility in Ukraine is twice as lower than at the developed IT markets.

In volume, only IoT, gaming and connected cars rose YOY in 3Q16; the remaining seven trends are down. 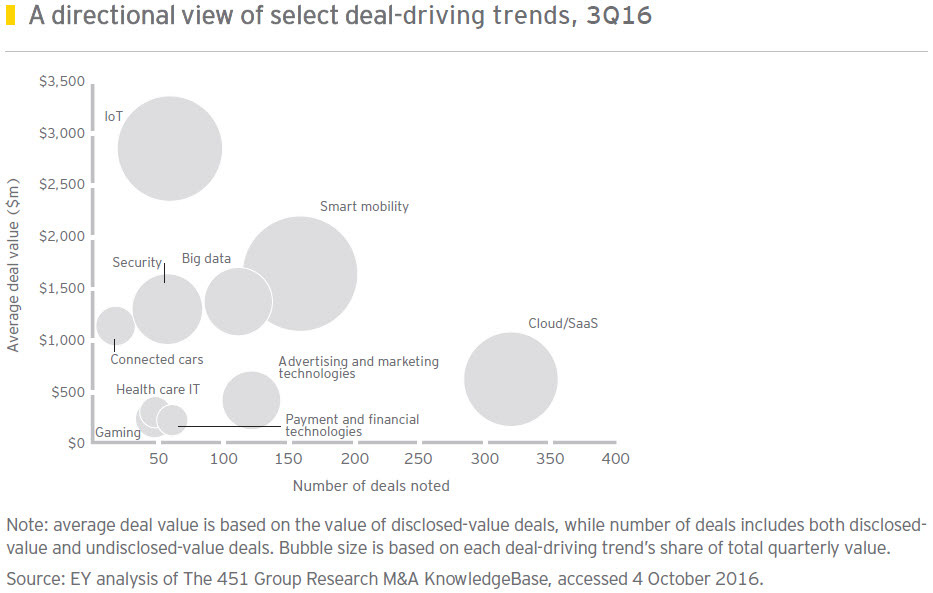 Technology segments in terms of M&A deals in 2017: Corporates vs Private Equity

According to MergerMarket, the most appealing technology segments will differ somewhat for corporate and private equity buyers this year. Twenty percent of respondents think artificial intelligence (AI) targets will draw the most attention in the corporate environment, compared to 16% who think e-commerce firms will be the most attractive and another 16% who predict that cybersecurity companies will be most popular.

Many corporates are pursuing AI and machine learning capabilities to increase efficiency, since organic growth has become scarcer and profits are increasingly driven by cost reductions. Due to the relative novelty of the technology, a large portion of AI targets are venture-backed and bought by tech giants such as Google, Oracle, GE, and Microsoft. Two of the highest-profile AI purchases of 2016 were made by enterprise software maker Salesforce, which bought PredictionIO for an undisclosed value and MetaMind for US$33m.

On the private equity side, nearly one-third of respondents (32%) believe that fintech will be the top tech segment for deals. Almost a quarter (24%) argue that e-commerce will hold the most appeal and a separate 8% each named SaaS, Internet of Things, and cybersecurity as the segments most likely to see M&A activity.

CES technology trends: what can we expect this year?

There is great excitement about VR’s ability to become a new medium for entertainment because it offers consumers a truly immersive entertainment experience. To date, VR has been mostly about games, but other M&E segments are readying new content for the format. The availability of non-gaming content (e.g. movies, TV and sports) is seen as key to growing the fledgling industry.

The Internet of Things will become more personal and impactful on people’s lives. Its influence and value will be enormous across industry sectors. Taking into account the rapid growth of this sector, vendors will have to address emerging IoT security issues. A massive Internet attack causing outages for several websites can be launched by simply hacking IoT devices.

Improved technologies make it easier for people to control devices with voice commands rather than tapping instructions on a mobile (or other) device. Voice commands are a more natural and productive way of interacting with devices. The voice-activated connected devices – no digital assistant needed will gain popularity. Many of these devices use “intelligent assistants”, which utilize artificial intelligence (AI) and natural language processing to enable voice control through a connected device’s own microphones.

Robotics makers began to use advantage technologies that have been made cheaper by smartphones and video games to develop robots that can make life easier and more productive. Now robots can see, hear and sense their environment, which is vastly improving the interaction between humans and robots. In 2017 sales of stand-alone digital assistant devices with cloud-based operating will probably reach 4.5 million units, a 54% increase year over year.

There is seemingly no end of tasks that drones can do, from aerial photography to delivering medicine. This year, drone makers will present drones with better range and longer battery life, as well as ones optimized for flying indoors and even diving underwater.

TV manufacturers will try to one-up each other with their latest display technologies and advanced features. Several of the biggest names in television will be touting various screen technologies, including 4K, organic light emitting diode (OLED) and High Dynamic Range (HDR) screens, alongside curved and even flexible TVs.

From smartphones and the Internet of Things, to self-driving cars, the theme of connectivity will be everywhere. 5G (or “fifth” generation) technology will enable a wealth of new services, including faster connectivity for mobile devices, smart cars and interactive VR experiences.

This sector will present the latest technologies in the categories of connectivity, telematics, autonomous vehicle technology/advanced driver assistance systems, and alternative powertrains. Self-driving is rapidly moving from concept to reality. In addition to self-driving cars, next year will focus on in-car intelligent systems, along with new electric vehicle technologies.

Worldwide wearable device sales should continue grow by more than in 2017. As the wearable segment develops, analysts expect that devices will become increasingly independent from smartphones, figuring that more independent wearables will be more attractive to consumers. Devices that are capable of analyzing more data will help consumers live healthier lives.

AI is a principal technology driving home automation. Companies will present their latest AI-driven innovations. Many of these innovations will not be products per se, but technologies that make networked products “smarter”.

EY is a global leader in assurance, tax, transaction and advisory services. The insights and quality services we deliver help build trust and confidence in the capital markets and in economies the world over. We develop outstanding leaders who team to deliver on our promises to all of our stakeholders. In so doing, we play a critical role in building a better working world for our people, for our clients and for our communities.