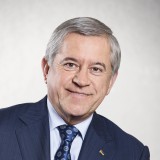 Anatoliy Kyrylovych Kinakh was born on August 4, 1954 in the Ukrainian village of Bratushany, which was founded by Bohdan Khmelnytsky-led Cossacks several centuries ago. Kinakh graduated from Leningrad Shipbuilding Institute in 1978.

Having a degree in shipbuilding engineering, he started to work for Tallinn Shipyard in 1978. Three years later he moved to Mykolaiv and took a position of workman at the Okean Shipyard, which he headed after some time. While working for the shipyard, Kinakh gained significant management skills, learned how to identify key problems and settle them effectively. People properly appraised the young specialist's persistence and commitment to his work. In 1990 the personnel of 20,000 employees of the Okean Shipyard nominated him as people's deputy. In April of the same year Anatoliy Kinakh was elected to the Verkhovna Rada, the first legislative authority of independent Ukraine.

He started to work actively in the parliamentary commission for economic reform. Such important and crucial for the country's further development documents as the laws of Ukraine on entrepreneurship and on property were elaborated and adopted with his active participation. Kinakh was appointed as a representative of the president of Ukraine in Mykolaiv region in 1992. Two years later more than 70% of his compatriots elected him as head of the Regional Council of People's Deputies and the Regional Executive Committee.

On the position of the regional governor Anatoliy Kinakh demonstrated himself as a professional and responsible leader. He paid much attention to the social sphere and care about people. He was one of the first people in the country to start realizing the idea of social partnership. It was he who initiated a pilot reorganization of the service for social protection of the population in Mykolaiv, which took two years. The Cabinet of Ministers of Ukraine supported this project and recommended that it should be implemented in other regions.

The politician was elected as a member of the Verkhovna Rada for the second time in Mykolaiv region constituency in March 1998. Kinakh headed the Committee for Industrial Policy Issues for some time. He initiated the elaboration and adoption of the law on an experiment at mining and smelting enterprises, which helped the sphere to overcome the crisis, revive plants and significantly increase the national budget revenues.

Kinakh was appointed as first deputy prime minister of Ukraine in 1999. One year later Ukrainian entrepreneurs and industrialists decided to create the Party of Industrialists and Entrepreneurs. Ukrainian businessmen entrusted Anatoliy Kinakh with party leadership.

For a year and a half the government chaired by Anatoliy Kinakh implemented the strategy aimed at increasing the domestic market's ability to pay, improvement of export policy, consolidation of efforts of the government and society aimed at the protection of national economic and political interests.

In autumn 2005, Kinakh started to work as secretary of the National Security and Defense Council of Ukraine (NSDC). He focused on the issues that form the basis of national interests – strengthening of competitiveness, socially oriented market economy, preservation and development of research and development potential, introduction of a new development model. Kinakh's key task on the position of NSDC secretary was the development and approval of the National Security Strategy of Ukraine, a comprehensive analytical document which was drawn up for the first time over the years of Ukraine's independence.

Following the parliamentary elections in 2006 Anatoliy Kinakh chaired the Verkhovna Rada Committee on National Defense and Security. He paid special attention to reform of the Armed Forces, in particular the implementation of the national programs for reform and development of the defense industry, development of armament and military equipment, creation of special technologies and materials for the production of new and modernization of old armament. He persistently supported the idea of the necessity to design and launch series production of military transport aircraft An-70 and corvette warships.

There are not many people in the contemporary history of Ukraine who have been MP seven terms in a row. Anatoliy Kinakh is one of such people. In spring 2012, he became a member of the Verkhovna Rada of Ukraine of the seventh convocation and today he works as first deputy head of the Committee on National Defense and Security.

In April 2013, he initiated the creation of the European Choice Interfactional Deputy Union at the Ukrainian parliament. Kinakh co-chaired it. This union closely cooperates with the group of European Parliament members created to support Ukraine's integration into Europe and streamline the Ukrainian legislation with the EU requirements.

In late 2012, Anatoliy Kinakh initiated the process of optimization of the conditions of Ukraine's membership in the World Trade Organization. In 2013, Kinakh became a member of the State Commission for Cooperation with WTO created under Ukrainian President Viktor Yanukovych for effective protection and promotion of the country's national economy interests.

Obviously, only unique experience of state activity led Anatoliy Kinakh to earnest conviction that the government is not almighty and self-sufficient. It has to be supported by active and developed civil society, including corporate, professional, youth and other organizations and unions. For this reason Kinakh dedicated his activity in the ULIE to the development of partnership with central and regional state agencies.

Under his leadership the ULIE asserted itself as an organization ready to participate actively in the development of the legislation necessary for businessmen's effective activity in Ukraine. The League started to submit to the Verkhovna Rada and the Cabinet of Ministers of Ukraine its own proposals to laws and regulations and insisted on their implementation. Anatoliy Kinakh involved in this activity Ukraine's leading scientists, lawyers, economists and representatives of the real sector of economy. The ULIE initiated wide public discussions of the most important economic projects and invited government representatives for the participation in them. Thus, the foundation for a dialogue between the government and businesses was built in Ukraine.

The ULIE president is also focused on the establishment of regular communication with international unions of industrialists and entrepreneurs, explaining this by the fact that only personal contacts between businessmen can fill the processes of foreign economic integration with real economic content, only experience of economic success shared personally can form trust of foreign investors to their Eastern neighbor and convince them to invest in Ukraine.

Despite his busy lifestyle Kinakh wholeheartedly loves his three daughters and wife, and does his best to devote more time to his family. Anatoliy Kinakh's schedule on weekends always includes visiting book shops and markets. Since student times he is keen on science fiction and astrophysics. He also has been reading many books about history lately. Kinakh likes Vladimir Vysotski's songs, jazz, The Beatles, and Pink Floyd.

Anatoliy Kinakh has many state awards, including international ones. Lithuanian President Valdas Adamkus awarded Kinakh with the Cross of Commander of the Republic of Lithuania. He also was awarded with the Order of Prince Yaroslav the Wise of the 4th and 5th degrees. In 2011 the president of Ukraine awarded the leader of Ukrainian industrialists and entrepreneurs with the Order for Merits of the 3rd degree.