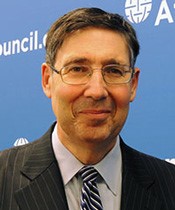 Ambassador Herbst served for thirty-one years as aForeign Service officer in the US Department of State, retiring at the rank ofcareer-minister. He was US ambassador to Ukraine from 2003 to 2006, when heworked to enhance US-Ukrainian relations, help ensure the conduct of a fairUkrainian presidential election, and prevent violence during the OrangeRevolution. Prior to that, he was ambassador to Uzbekistan (2000-03), where heplayed a critical role in the establishment of an American base to help conductOperation Enduring Freedom in Afghanistan. He also promoted improved US-Uzbekrelations, in part by encouraging the government in Tashkent to improve itshuman rights record.

In his last four years at the State Department, he servedas the coordinator for reconstruction and stabilization, leading the USgovernment's civilian capacity in societies in transition from conflict orcivil strife, and to provide support to countries at risk of instability. Heoversaw the establishment of the Civilian Response Corps of the United States,the US civilian rapid response force for reconstruction and stabilizationoperations overseas.

Ambassador Herbst previously served as US consul generalin Jerusalem; principal deputy to the ambassador-at-large for the NewlyIndependent States; the director of the Office of Independent States andCommonwealth Affairs; director of regional affairs in the Near East Bureau; andat the embassies in Tel Aviv, Moscow, and Saudi Arabia.

He most recently served as director of the Center forComplex Operations at National Defense University. He has received thePresidential Distinguished Service Award, the Secretary of State’s CareerAchievement Award, and the State Department’s Distinguished Honor Award.Ambassador Herbst has written book chapters, articles, and op-eds on onstability operations in Central Asia, Ukraine, and Russia. His writings haveappeared in the New York Times, the Washington Post, The Atlantic, The NationalInterest, and Foreign Policy. He has been a frequent guest discussing theUkraine crisis on television and radio.

Ambassador Herbst earned a Bachelor of Science in ForeignService from Georgetown University’s School of Foreign Service, Phi Beta Kappa,and a Master of Law and Diplomacy, with distinction, from the Fletcher Schoolat Tufts University. He also attended the Johns Hopkins University School ofAdvanced International Studies Bologna Center. ​He has five children and five grandchildren.