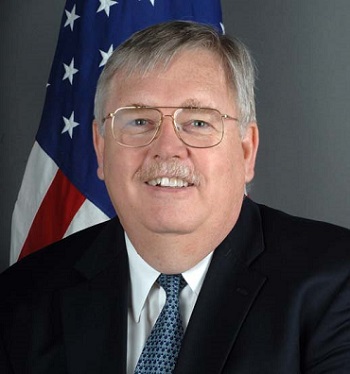 John F. Tefft has been a career Foreign Service Officer for 37 years.   Mr. Tefft served as Deputy Assistant Secretary of State for European and Eurasian Affairs and was responsible for US relations with Russia, Ukraine, Belarus and Moldova.  From 2003-2005 Mr. Tefft was the International Affairs Advisor at the National War College in Washington, DC.

He was Deputy Chief of Mission at the US Embassy in Moscow from 1996 to 1999, and served as Charge d’affaires from November 1996 to September 1997.  His other Foreign Service assignments include:  Jerusalem, Budapest and Rome.   Mr. Tefft holds a Bachelors Degree from Marquette University and a Masters Degree from Georgetown University.

In 2000, Tefft won his first ambassadorial post, to Lithuania, where much of his time was spent working on that country’s admission to the North Atlantic Treaty Organization (NATO). He had returned to Washington to participate in talks between Lithuanian President Valdas Adamkus and President George W. Bush in September 2001 when the 9/11 attacks occurred. Although most air traffic was halted, Tefft and Adamkus were flown out of the country on a special flight to make their way back to Lithuania.

Beginning in 2003, Tefft served a stint as an international affairs advisor at the National War College. The following year, he was named a deputy assistant secretary of state for European Affairs.

Tefft was put in charge of another embassy in 2005, this time in Georgia. That country at the time had problems with breakaway republics in South Ossetia and Abkhazia. Tefft acted as a mediator in the Georgia-Abkhazia conflict. However, it wasn’t all doom and gloom for Tefft while he was in Georgia. Before leaving, he appeared on a Georgian television talk show and sang Louis Armstrong’s “What a Wonderful World.”

In 2009, Tefft was moved to another former Soviet republic, this time Ukraine. He tried to facilitate that country’s entrance into NATO, but this time was unsuccessful. He worked to gain the release of former Prime Minister Yulia Tymoshenko from prison, where she was being held on what some considered trumped-up charges since 2011. Tymoshenko was eventually freed in 2014.

Tefft retired as ambassador, and from the State Department, in 2013. He was named executive director of the RAND Business Leaders Forum, described by Lynnley Browning of Newsweek as “a clubby lobbying group” which considers strategic issues facing the United States, Russia and Europe. However he was called out of retirement less than a year later by President Barack Obama to serve in Moscow as U.S. Ambassador to Russia. Although Russia signed off on Tefft’s nomination, he’s not popular with the government there. An article in Pravda connected Tefft with the “color revolutions” (rose in Georgia, orange in Ukraine) that opposed Russian influence.

Tefft and his wife, who is a nurse and biostatistician, have two daughters, Christine and Cathleen, and one grandchild. He speaks Russian, French, Hebrew, Hungarian, Italian and Lithuanian.