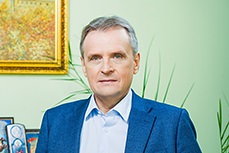 His career started from the position of machine operator at a state owned farm in 1972. In 1977 he graduated from the Ukrainian Agricultural Academy. He worked as chief engineer at the Bilshovyk Collective Farm in Fastiv District. In 1983 he was elected as board chairman at the collective farm entitled "The Way to Communism" in Fastiv District.

After the graduation from the All-Soviet Union Academy of Foreign Trade in Moscow in 1991 he worked as head of department at the Agriculture Ministry of Ukraine and director general at JSC Ukragrobusiness and CJS Agroland. From June 2001 until November 2002 he held the position of the deputy prime minister of Ukraine for agriculture. From 2002 until now he is the president of the Ukrainian Agrarian Confederation. He also holds the positions of the chairman of the public council at the Economy Ministry of Ukraine, member of board of the Ministry of Agrarian Policy of Ukraine, co-chairman of the public council at the Ministry of Agrarian Policy and a member of the Board of directors ofthe U.S.-Ukrainian Business Council. In 2010, he was appointed as the head of the Council of Entrepreneurs at the Cabinet of Ministers of Ukraine.

Kozachenko is a leader of social movement, experienced director, highly qualified expert in agriculture industry, active participant in the process of economic, social and state transformations in Ukraine. He represents and protects interests of agriculture businesses at government agencies.

Kozachenko was awarded with an honorary title of Honored Worker of the Agriculture Sphere of Ukraine for his outstanding personal achievements. He also was awarded with the Order of Prince Yaroslav the Wise of the 5th degree and a certificate of honor from the Verkhovna Rada of Ukraine.

He was elected to Verkhovna Rada in 2014 (8th Convocation). Kozachenko served at the Parliament Committee for Agrarian Policy & Land Relations.