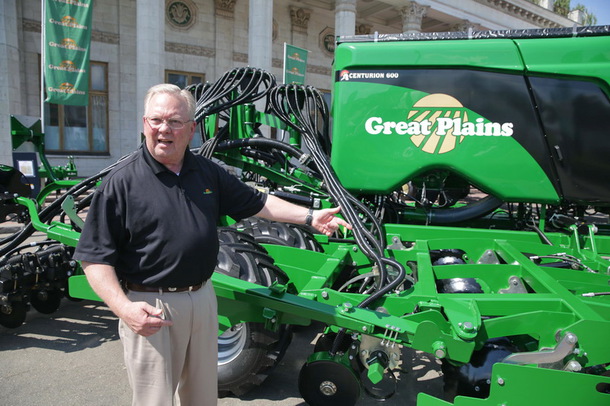 KYIV--Ukraine’s central bank may deserve high marks for protectingthe value of people’s money over the past few months, but its restrictions oncurrency transactions are hurting importers and the ability of private businessto access short-term financing.

Not helping matters are thecentral bank’s 90-day limit for making payments on import and exporttransactions, and the U.S. Export-Import bank’s decision last month totemporarily halt operations in Ukraine.Few Ukrainian farmers are big orefficient enough to receive cash in advance of harvests, either through futurescontracts or pre-export finance centers.

Most have to borrow at yearlyrates that reach 30 percent. This is where the American Export-Import Bankplayed a role.

"We don't have that tool, theopportunity to offer financing now," Tom Bryan, export director at GreatPlains, told the Kyiv Post. "In the past years we've had some major farmcorporations that have bought millions of dollars’ worth of Great Plains' farmequipment financed through the EXIM bank."

U.S.-Ukraine Business Councilpresident Morgan Williams added that the U.S. government should find a way torenew the bank's operations as soon as possible. Its "wait-and-see"approach is extremely harmful for the Ukrainian economy, while the Ukrainianrisks [for the U.S. EXIM Bank] are in reality not too high and should be fullyacceptable, he said.

Importers find the National Bankof Ukraine’s currency restrictions even more painful.  The 90-day term forexport-import transactions, introduced in December, were recently extended lastweek until Sept. 3. "They (customers) can't pay for anything that theydon’t get back within 90 days," Bryan of Great Plains said.

"This creates a lot ofpaperwork, pressure on purchase requirements and details. We understand thatit's to curb corrupt schemes to get currency out of the country and moneylaundering, but we are all just normal people trying to do business the rightway and we get penalized, and it's very difficult."

The equipment, worth some$150,000, is usually ordered six months ahead of the seeding campaign,supported by a small down payment from the distributor. It takes up to severalmonths for assembly, and then some 60 days to ship it to Odesa.

The problems also get passed tofarmers, who are experiencing difficulties with getting equipment, seeds andfertilizers from abroad, Bryan said. High-quality inputs are crucial foragricultural yields, including modern farming equipment that provide precision,are more productive and fuel efficient. "It hurts us but it also deprivesour customers, Ukrainian farmers and distributors, from having a goodopportunity," Bryan said.

Williams said the 90-day termimposed by the NBU is only one of numerous measures that are harmful forUkraine’s economy. "The NBU regulations towards private business areterrible, there are hundreds of them," Williams told the Kyiv Post."They are very restrictive for investors to bring money, to get outmoney…the National Bank is not supposed to be regulating in minute details thefinances of businesses, but they are."

The central bank said thatalthough some restrictions were extended until September, it eased others aspart of its “liberalization program” to phase them out on the money market,according to the NBU’s statement of June 3.

Importers also complained thatthey couldn’t buy enough foreign currency from banks to pay suppliers duringlast winter. "This was a tragedy," said Volodymyr Ischuk, director ofHarvester, intermediary importing machines from U.S. John Deere, Case, Kinzeand more. "There was a feeling that I would have to shut down thebusiness."  Purchasing hard currency got easier in February when theNBU let the exchange rate float, Ischuk said.

Doing business will stay bearableif everything stays the same, and without new unexpected regulations, he added."This means … that you cannot give a single dollar to Ukrainians becausetomorrow they get some new regulator who makes some odd changes and you don’tget a single dollar (back) as an investor," Ischuk said.

Kyiv Post staff writer OlenaGordiienko can be reached at gordiienko@kyivpost.com.