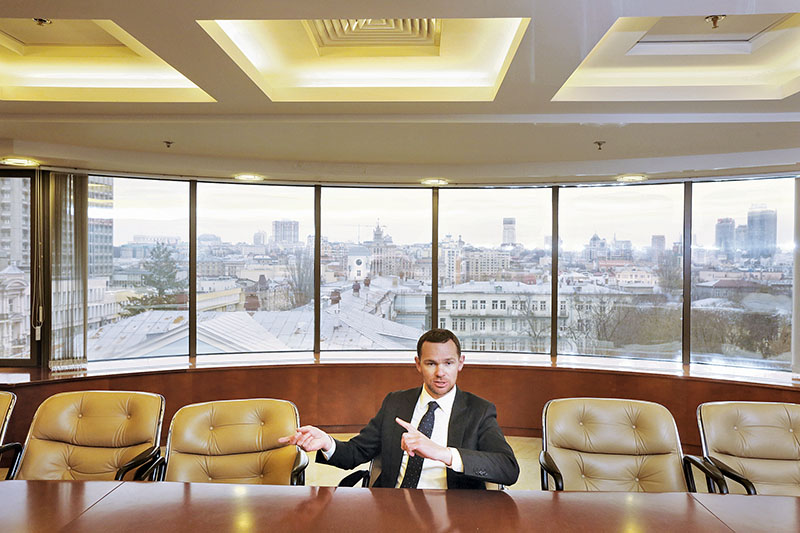 KYIV-- When it comes to corruption, bribery and tax evasion in Ukraine, Andriy Stelmashchuk believes lawyers are part of the problem. They should, instead, be part of the solution, according to the managing partner of Vasil Kisil & Partners, one of Kyiv’s leading law firms.

That is one reason why he might run for president of the Ukrainian Bar Association, which claims to unite 6,000 legal professionals in the nation, including lawyers. The election will be held in June. Current president Denys Bugay cannot seek re-election because he has reached the two-term limit.

Most Ukrainian law firms, Stelmashchuk says, structure themselves in ways similar to other businesses, with complicated offshore entities designed to minimize or evade taxes. Such practices, he says, include not declaring the full amount of employees’ salaries to minimize taxes.

As long as law firms persist in structuring their businesses in this way, Stelmashchuk said, “corruption will prosper and tax evasion and other illegal forms of doing business will prosper in Ukraine.” The financial reporting by law firms, he says, shows that a majority of the top 50 law firms “are structured in a way that allows them to minimize taxes on the edge of tax evasion.”

Stelmashchuk, however, doesn’t expect his campaign for greater tax compliance and transparency among law firms to help him win the presidency of the Ukrainian Bar Association. He says many of his fellow lawyers “don’t see a problem with” the status quo. “They see it as normal.”

He acknowledges some of the practices are “legal from a purely formal standpoint,” but unethical. “They want to achieve some goal with such structure,” Stelmashchuk says. “It’s obvious for me that such a goal is paying less taxes than they could. In the USA, it’s not a crime to say you want to optimize your taxes. But there is a thin line between tax optimizing and tax evading.”

He’s gotten into arguments with other lawyers, who rationalize not paying taxes because “you never know how the government uses the money….It’s a poor justification for not wanting to change yourself and to start a different business environment in Ukraine.”

He says comparing two rankings illustrate his point. One is of top law firms, done by Yuridicheskaya Practika, a legal publication, and another is a ranking of revenue by Delo.ua, an online business magazine. Top-rated law firms show only part of their revenue in “officially submitted information” to the State Statistical Service, Stelmashchuk contends. “Delo took information only from one legal entity, believing that all law firms were acting through one legal entity,” rather than the 5 to 15 entities that some operate, he says.

Another frustration for Stelmashchuk is the legal community’s complicity in Ukraine’s culture of bribery – both demanded and paid to settle legal disputes.

He says bribery would wither if law firms simply stopped “being intermediaries in corruption – bribing judges and officials,” he says. “Law firms can play a crucial process in transformation. We are advising clients on how to structure businesses, run businesses. That’s why we have a huge impact on our clients.”

He says that Vasil Kisil & Partners, among at least a handful of law firms that he knows, have persuaded clients that they can win disputes “without exploiting some illegal methods.
“When you want to get a result from your brain, not with cash you got from the client, it’s possible to structure (a case) in a legal way so the court will not be able to render a decision against your client,” he says.

For these reasons, Stelmashchuk says, he is thinking about running for president of the Ukrainian Bar Association. Altogether, he says, Ukraine has 40,000 attorneys admitted to the bar. He estimates that Kyiv has 100 active law firms, with a top tier of 50 firms, a secondary tier of 30 law firms and another 20 firms “we do not know well, but are also very active.”

If he runs for president, he must declare his candidacy by April 3, two months before the June 3 election. [Stelmashchuk has confirmed to USUBC that he has now declared his candidacy].  The contests, he says, are usually competitive. “I am thinking about it, frankly speaking,” he says. “I want to change the legal market. It’s a very ambitious goal. I realize that many law firms who comprise the Ukrainian Bar Association do not act in a way that our law firm acts. That’s one problem.”

Win or lose, he says, he expects that it will eventually become a competitive advantage rather than a liability to operate cleanly. He says nations that take a tough stance on bribery will inflict criminal cases and financial penalties on enough law firms to change their habits.

“The market will put pressure on law firms,” he predicts. “Sooner or later clients will prefer to work with those law firms who are ethical, transparent and compliant. It’s a matter of time.”
He says the legal community must enforce a tougher code of ethics among members. In America, for instance, disbarment for ethical violations ends a lawyer’s career and ability to practice. “This should be an evolutionary process. You cannot pass a law and everyone will change,” he says.

“Ukraine is a very young democracy. I am not sure it’s a democracy, in fact, but a very young country in terms of independence from its Soviet heritage…Each of us should understand the necessity to change himself or herself. We have to realize from personal experience that there are benefits to being transparent: You sleep better; you can easily run for president. Nobody can get any ‘kompromat’ against you.”

Open in 1 other location  Details