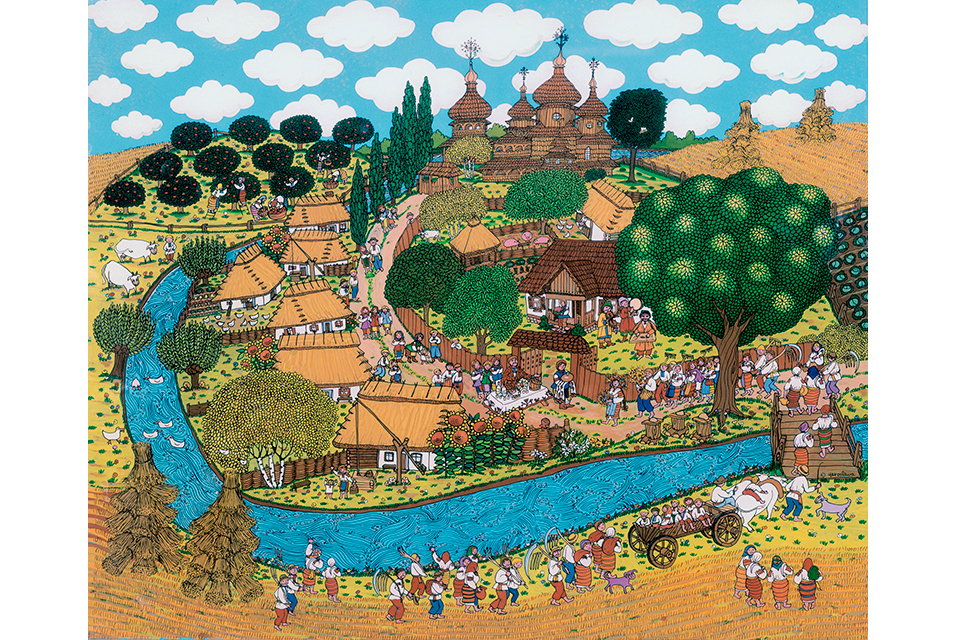 Yaroslava Surmach Mills (1925–2008) was a Ukrainian American artist whose career spanned nearly sixty years. A graduate of The Cooper Union, Yaroslava—as she signed her work—was trained as a fine artist. She is known best for her unique reverse glass paintings depicting Ukrainian folk life, adapted from an ancient method for creating folk icons found in Carpathian Mountain villages. Her professional career branched into several other fields such as book illustration, calligraphy, iconography, stained glass design, and education, even as she continued with one of her earliest artistic endeavors – making pysanky (plural for pysanka).

"The importance her Ukrainian heritage played in Yaroslava Surmach Mills' work, cannot be overstated," said the Museum's director, Maria Shust. "As someone who worked in mainstream publishing and in academia, counterbalanced with her exposure to traditional folk arts, Yaroslava became a conduit where traditional, contemporary, and graphic arts traversed interchangeably, shaping her uniquely stylistic approach that is evident in this exhibition."

Yaroslava’s life and artistic career is indelibly tied to her origins. Born to and raised by Ukrainian immigrant parents in New York City, Yaroslava grew up in a home where the Ukrainian language and traditions were nurtured. In 1910, Yaroslava’s father, Myron Surmach, immigrated to the United States where he met and married his wife Anastasia. He opened his first bookstore in 1918, Sichoviy Bazar, which eventually was renamed as the Surma Book & Music Company on East 7th Street; it remained the oldest Ukrainian bookstore in the United States until its closing in 2016. A Ukrainian community hub, Surma also became a venue for purveying many of the greeting cards whose designs were taken from Yaroslava’s glass paintings and publications. Surma remained a family business across three generations beginning with Myron Surmach, the founder; then his son Myron; and lastly his grandson Markian Surmach.

Yaroslava credited her mother for her earliest exposure to Ukrainian folk art:
She taught me to embroider on linen by counting threads, and she taught me to decorate Easter eggs. [In Ukraine,] she decorated the white-washed walls of their thatched-roofed house each spring. I remember how she could entertain me by magically forming flowers or people or houses on paper with her pencil.

After graduating, Yaroslava began working as art editor for Humpty Dumpty’s Magazine for Little Children. Jaroslaw Leshko, Professor Emeritus of Art at Smith College, reminds us that the 1950s and 1960s were a period in popular art when many artists, intrigued by naïve and folk art, experimented with new interpretations of the genre. The flat paintings depicting folk and countryside scenes by Haitian “naif” artists, for example, were ubiquitous in the New York street art markets of the day. Manhattan’s downtown art scene in the years following World War II, at the height of Abstract Expressionism and the beginnings of the Pop Art movement, contained a universe of influences for a recent college graduate such as Yaroslava.

With the 1950s, and the death of Stalin, came political shifts in the Soviet Union and access to Ukraine eased. Seeing an opportunity to obtain one of the first granted visas, Yaroslava courageously took a solo trip to Ukraine in 1956. (In fact, this was Yaroslava’s second trip to Ukraine. The Surmach family traveled to the ancestral homeland in Western Ukraine in 1931.) A decade after World War II, her journey on a Vespa motor scooter through the countryside opened up new paths and opportunities for Yaroslava. Struck by the stunning landscapes of Eastern Europe and the rural lifestyle immersed in tradition and traditional art, she returned from her trip with memories and ideas that became emblematic of her subsequent artistic expression.
I visited all the folk museums [in Ukraine] with special interest….It was in these museums that I first noticed another type of folk art – glass paintings. I learned that these small, colorful, naïve paintings were executed in reverse, on the underside of a piece of glass. The subjects were usually religious – the icon of the poorer peasant.

Recalling the glass icon paintings that had so captivated her in Ukraine, Yaroslava replicated the process using gouache and water tempera, and marveled at “the brilliant results.” In the brochure The Tale of Yaroslava and the Glasspaintings, she wrote:

From some colorful pocket of my subconscious the little peasants began to spill out onto the glass and arrange themselves into the scenes of my childhood's imagination.

Many of these glass paintings were reproduced on greeting cards and sold in the Surma store, thus popularizing those wonderful scenes throughout the Ukrainian American community. The eloquent characters captured in her paintings of village and family scenes were often based on her family members, imparting a personal tenor to the paintings. In 1968, Yaroslava’s winter scene painting, the “Carolers,” was published as a UNICEF holiday card. Yaroslava’s images of traditional holidays and scenes of Ukrainian life have proven to be timeless, and these reproductions continue to be sold today.

Lubow Wolynetz, Curator of Folk Art at The Ukrainian Museum, has long recognized Yaroslava's importance in reflecting essential Ukrainian folk tradition, and incorporated Yaroslava's glass paintings into many exhibitions. Ms. Wolynetz emphasizes Yaroslava's "ethnic heritage and culture, which extended from the family hearth into the wider circle of the Ukrainian émigré community."

The Ukrainian-themed glass paintings and their reproductions were the most popular of Yaroslava’s works, but she explored other mediums and genres as well. Some of her early works include stylistic gouaches, oils on canvas, and wool wall hangings; however, few works from those early years remain. An oil portrait of her husband, Columbia University sociology professor and author C. Wright Mills, is known to us today only due to a photograph taken in 1958. She also produced etchings, and her archives contain numerous drawings, mostly the sketches for her projects.

Book illustration was another successful vehicle for Yaroslava. She collaborated with Marie Halun Bloch (translator) on Ivanko and the Dragon: An Old Ukrainian Folk Tale (1969); illustrated A Lion for a Sitter (1969) by Helen Kay; and she edited and illustrated I Like You and Other Poems for Valentine’s Day (1976). The Ukrainian folk tale The Mitten (1989), story by Alvin Tresselt, is the most recent and perhaps the best known of the children’s books that she illustrated.

Concurrently with her art career, Yaroslava was an educator, teaching classes in Gothic and Celtic illumination and calligraphy at Manhattanville College (1950-1955), and later conducting workshops in reverse glass painting and iconography. Versed in the Byzantine canons of iconography, Yaroslava worked in traditional egg tempera, natural and semi-precious pigments, clay and gold leaf on wood board.

The 1970s brought major commissions Yaroslava's way. In 1974, she was invited to design the stained-glass windows at St. Demetrius the Great Martyr Ukrainian Catholic Church in Toronto, an undertaking that took thirty-two years to complete. Windows to Heaven (2008), published by the church, details the project's history and culmination contains color plates of the windows. A projection of these images is part of the exhibition. A few years after the start of the Toronto Church project, she was commissioned to design the etched-glass entrance doors of the New York Senate Chamber lobby in the New York State Capitol in Albany, N.Y.

The proposal for the exhibition Yaroslava Surmach Mills: Retrospective grew out of a discussion with her son, Nik Mills. Initially, the expectation was to showcase Yaroslava's pysanky during the 2018 Easter season. However, the conversation rapidly shifted from a presentation of only pysanky to a comprehensive survey of Yaroslava's career as an artist – an exhibition to appropriately honor her exceptional talent ten years after her death, and to reveal her role in connecting Ukrainian American communities across several generations, facilitated by the Surma store that her father founded. The exhibition presents color and joy—those attributes that Yaroslava herself aspired to convey in her paintings: "I often find it impossible to work on a painting without grinning," wrote Yaroslava. "I part with them reluctantly, but with hopes that they'll bring smiles and good feelings to their new owners."

Yaroslava Surmach Mills' works have been exhibited in numerous solo and group shows. Annual displays of her Easter and other holiday glass paintings have become de riguer at The Ukrainian Museum. In addition, Yaroslava's artworks are found throughout the world in museum and private collections, including those of prominent individuals such as the opera star Beverly Sills. As well, her artworks are prized by members of the Ukrainian American community.

The Ukrainian Museum has planned a slate of programs in conjunction with the exhibition YAROSLAVA Surmach Mills: Retrospective, including family activities, an adult glass painting workshop, gallery tours, and films. In addition, the Museum has produced a high quality poster for the exhibition, and the book The Mitten, illustrated by Yaroslava, is also sold in the gift shop.