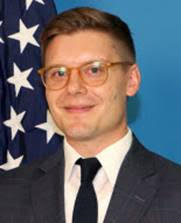 YOU ARE INVITED to attend a U.S.-Ukraine Business Council (USUBC), www.USUBC.org, members Roundtable Discussion with the two new top members of the U.S. Embassy Commercial Section, Martin Claessens, Senior Commercial Officer and Charles Phillips, Commercial Officer (see bios below) on Friday, March 16, 2018, 3:15 p.m. to 5:00 p.m. followed by a light reception at the Conference Room in the offices of SigmaBleyzer in Kyiv (see directions below). The meeting will be in English.

Martin Claessens and Charles Phillips will present brief remarks on the current state of the U.S.-Ukraine trade and investment relations and their program of work in Ukraine which will be followed by an open discussion/Q&A session.  The moderator for the USUBC Roundtable Discussion will be Morgan Williams, President, U.S.-Ukraine Business Council (USUBC), www.USUBC.org.

You do not want to miss this important USUBC Roundtable Discussion with the two new top members of the U.S. Embassy’s Commercial Section.

RSVP:  Registration is required for attendance. To register please e-mail Ludmyla Dudnyk at ldudnyk@usubc.org. There is no charge for the meeting. USUBC expresses its appreciation to member SigmaBleyzer for hosting this event.

Martin Claessens joined the U.S. Embassy team in Kyiv at the very end of last year. Before that, he managed an office of 11 trade professionals at the U.S. Embassy in Bogota, Colombia where he and his team assisted U.S. companies with market access and trade promotion in Colombia and in the Andean region.

Martin attended The George Washington University, graduating with a B.A. in International Affairs, a concentration in International Economics, and a minor in Spanish.  He also studied at the Universidad Autónoma in Madrid. Martin is fluent in Spanish and speaks conversational French. He is a lifetime percussionist and avid scuba diver.

Previously he served on the Committee on Oversight and Government Reform in the U.S. House of Representatives, first as Senior Counsel and then as Chief Counsel for Policy. He had primary responsibility for the oversight, modification, and implementation of policies pertaining to agency management and organization, information policy and technology, and procurement. Prior to returning to Capitol Hill, Mr. Phillips served as a public policy attorney at a large international law firm in Washington DC, where he advised broad range of Fortune 500 companies, associations, and public entities on legislative and policy matters.

Mr. Phillips began his career in Washington as Counsel to a senior U.S. Senator, serving as the Senator's principal advisor on legal, economic, and trade policy. In addition, he directed the Senate Information Technology Caucus.  He received his law degree from William & Mary in Virginia, and his undergraduate degree from the University of Notre Dame in Indiana.

(1) IF DRIVING FROM TARAS SHEVCHENKO BOULEVARD/UNIVERSITY AREA, cross Khreshchatyk Street and enter through an arch with stairs and a ramp under a red Arena canopy next to the Pinchuk Art Centre across the street from Bessarabsky Market. If you missed this entrance, you can go from Baseyna Street through main entrance to the Mandarin Plaza shopping center after turning right onto Baseyna Street. Take elevators or escalators up one floor from the first floor and then go through a corridor between clothing stores; the entrance to the corridor is across the aisle from the elevators.

(2) IF DRIVING FROM LEO TOLSTOY SQUARE/OLYMPIC STADIUM AREA, go through the large entrance on the corner of Khreshchatyk Street and Skoropadsky Street next to the Nebo nightclub.

(3) IF DRIVING FROM LESY UKRAYINKA BOULEVARD/PECHERSK AREA, make a left on Skoropadskyy Street leaving the Arena City/Mandarin Plaza complex on your right, pass the entrance to the underground parking; enter through an arch past the Burger Restaurant (the steps go down first, and then up to the courtyard).

(4) IF WALKING FROM KHRESHCHATYK STREET, go into the shopping center under the intersection of Khreshchatyk Street and Taras Shevchenko Boulevard (where the Lenin statue used to be), there are glass doors with Arena sign on them, behind the doors are the stairs and an escalator from the shopping center to the inner courtyard.

WHEN INSIDE THE OPEN-AIR INNER COURTYARD and facing the entrance to the large white canopy which is a restaurant, bear right leaving the white canopy on your left. The top of the building has a large Mandarin Plaza sign in red on the top floor. You will see the double doors next to the Armani clothing store with the SigmaBleyzer sign on them (as well as a LG sign).

Enter through the double doors, go up a few steps to the two elevators which also have the SigmaBleyzer sign in between them, take an elevator to the 8th Floor.  In case you are still unclear as to the location of SigmaBleyzer’s office, call SigmaBleyzer office at +38 (044) 284-1290.