“Shchedryk” at the White House 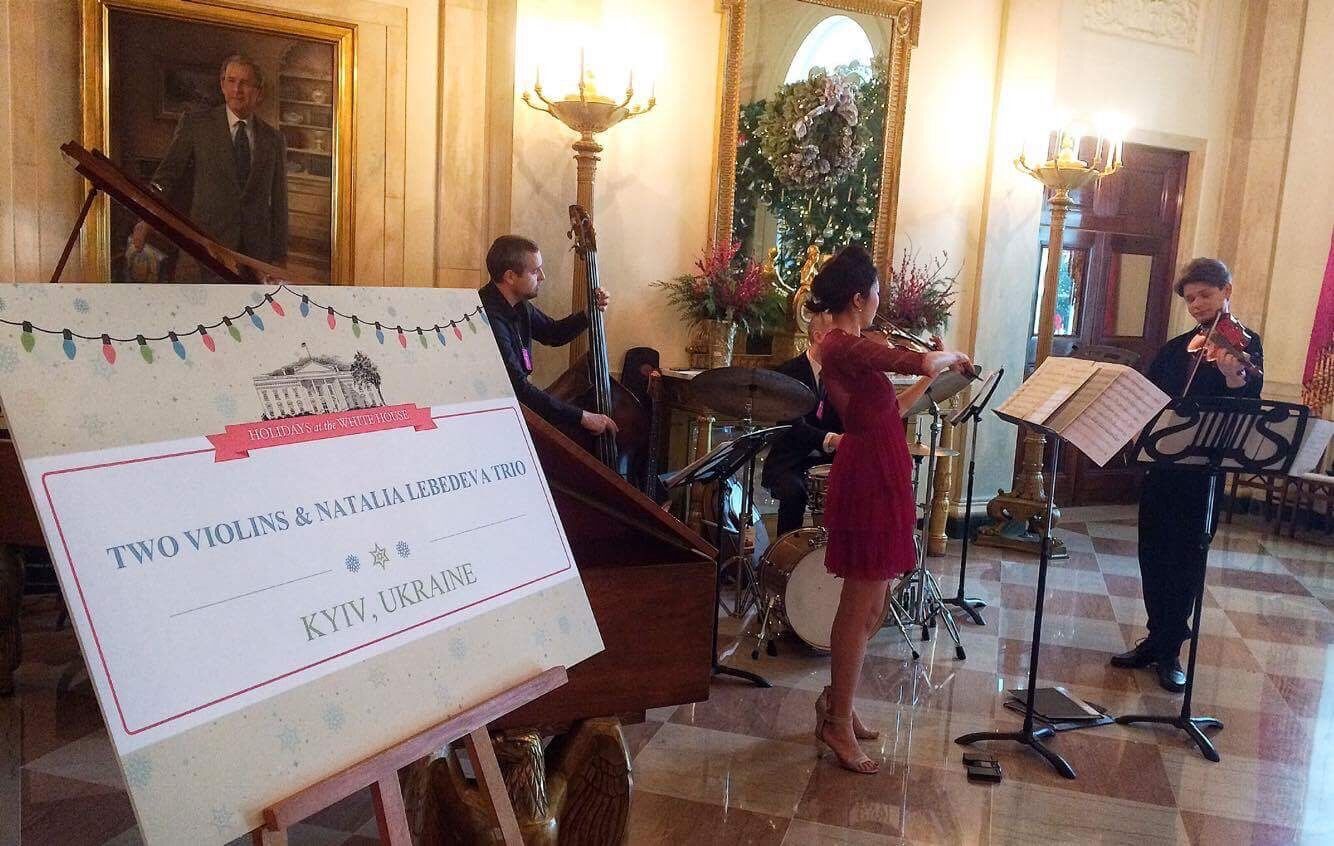 “Dream wildly!” – Bohdan Hawrylyshyn often said. More than two years we dreamt wildly and worked persistently so that “Shchedryk” (Carol of the Bells) was not only heard in the world but also for people to know where this wonderful music, loved by all, comes from. For the first time our version of the world’s known carol was heard on Christmas 2013-2014 at the Maidan Nezalezhnosti, on the stage of the Free University of Maidan near the Liadski Vorota.

Then Arts and Education Center “Master Klass” celebrated the New Year and Christmas under flags of the Euromaidan, jointly with all brave and beautiful Ukrainians who with dignity defended their rights and freedom. “Frost raged, fingers froze to strings and we performed the premier of Natalia Lebedeva’s arrangement – jazz version of “Shchedryk” – Two Violins’ soloist Illia Bondarenko remains. Almost a year ago the same version was heard on the stage of the UN in New York, accompanied by a photo project of Ihor Gaidai “Faces of Freedom. Maidan”.

Then the Ambassador of Ukraine to the UN Yurii Sergeev said: “It is the best cultural event I have ever had a chance to visit or organize for the years of diplomatic work. These children and this music must be heard all over the world. You must perform at the White House and show America and the world that Ukraine has what to share with and can do that on the highest level”. And it all happened.

On 21 and 22 December, inspired by the dream and brave intentions, the duo Two Violins and Natalia Lebedeva Trio gave two concerts at the White House of Washington, D. C. First of all, the Ukrainian musicians were the only non American band at the New Year celebration

“White House Open House Performance”. The second, they were the only who played two concerts at a time. The audience did not want to let the musicians leave the stage that is why their concert was prolonged for half of an hour and then for another half of an hour. All in all for two days of concerts the Two Violins band performed for more than 5000 American listeners. People approached, took photos, wrote down the name of the band, took photos next to a poster “Two Violins &amp; Natalia Lebedeva Trio.

As when we play on the stages like Carnegie Hall, or events like Prince Harry’s ball, and now at the White House, we are getting to be more than musicians, we are becoming the face of our country, – Illia Bondarenko, the fifteen year old soloist of the Two Violins, shares his impressions. – I am excited! It is all unreal beautiful and the audience is very cheerful and grateful!”

“We want to express special gratitude to all brave and sincere people who help to realize so important projects for promotion of Ukraine abroad so that people could know us as a civilized, talented and modern country with deep roots and rich culture. First of all, now-deceased Bohdan Hawrylyshyn to who we devoted both of the concerts at the White House. To this fantastic Man and Ukrainian of the World!!! I’d mention all and each by name! Though the most of names unfortunately will remain unmentioned. I want to give special thanks to Oleh Bakhmatiuk and America  Center  for  European Ukraine, Morgan Williams and US-Ukraine Business Council (USUBC), Volodymyr Lavrenchuk and Raiffeisen Bank Aval, the community of Ivano-Frahkivsk in Washington, D. C. and Arlington town community, St. George’s

Church in New York, its rector father Emillian and fathers of the church, Ukrainian Museum in New York, Foundation “Vidrodjenia” and Bohdan Hawrylyshyn Foundation. The special thanks to the Embassy of Ukraine in the USA. To Oleksiy Kogan who was the first to see a jazz sparkle in the violinists. And also to wonderful musicians – Natalia Lebedeva, Kostiantyn Ionenko, Roman Yakovchuk, Tomoko Akaboshi and to the dear, brave and crazy Two Violins team. With these people you can move mountains and work wonders!” – tells Katrya Kot.

Please find hereby the first record of now historical “Shchedryk” performed by the Two Violins and Natalia Lebedeva Trio in May, 2014, at the Art Forum in the Arts and Education Center “Master Klass”:

Carol of the Bells https://youtu.be/ioClceMCIUs