A BREAKTHROUGH FOR UKRAINE 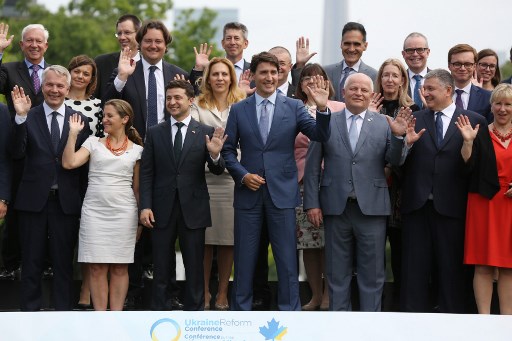 Compared to its peer counties, Ukraine’s economy has performed poorly since independence in 1991. According to IMF data, Ukraine’s annual rate of economic growth since 1993 (the first year with reliable statistics for the former Soviet Union) to 2018 was 2.9% per annum.

By contrast, neighboring countries had much higher annual rates of growth during this period: Estonia, 9.7%; Bulgaria, 9.1%; Lithuania. 9.0%, Slovakia, 5.5%; Poland, 5.4%; and Czech Republic, 4.2%. Kazakhstan grew by 12.5% pa; and Georgia by 10.9% pa. In addition, according to the World Bank’s Doing Business Reports, Ukraine has the most unfavorable investment climate among this group of countries.

At the time of independence in 1991, Ukraine had the greatest potential among former planned economies to develop quickly. It was the second largest European country with a large population. It had a well-educated and skilled labor force, rich agricultural soil, good mineral resources, a strong technical and industrial base, and a reasonably developed infrastructure. However, despite these advantages, the country failed to increase GDP at high rates and improve the quality of life of its people, with long recessions lasting many years.

Why has Ukraine performed so poorly?

We believe that the main reason for Ukraine’s poor performance is that it was never able to establish a truly free and competitive market economy. International experience shows that the two key elements of an efficient market are strong competition and freedom to operate in the market with minimum government interference. Freedom to do business without government interference will result in competition. Freedom to do business is the driving force, while competition is the regulator of behavior.

Market competition and freedom are therefore the key engines for growth and development. In Ukraine, the transition from central planning to a market economy was seriously repressed by vested business interests, which benefited from maintaining the pre-market status quo. In fact, Ukraine’s economy still retains many of the characteristics of the former Soviet Union, with many monopolies, excessive government intervention in the economy, centralized decision-making, very weak rule of law, and widespread corruption.

By contrast, the above-mentioned neighboring countries embarked on rapid transitions to institutions and policies associated with free and competitive market economies. The international experience of successful countries shows that reforms to create a market economy must be quickly implemented without delay. Sluggish change and a slow reforms process have not yielded good results, because delays provide enough time for vested interests to create strong resistance and further slow the reform process.

Only swift and bold reform programs have a chance of success. In addition, an uncertain business environment discourages market entry and the adoption of better technologies. In turn, these policies bred corruption. Corruption was not the cause of poor economic performance, but one of the results of inadequate free and competitive market-oriented institutions and policies.

Two of the most important actions that Ukraine can take to establish a free, decentralized and competitive market are the following:

(1) Introduce competition by rapidly demonopolizing the economy. Ukraine’s markets are highly monopolized, not because of successful individual businesses, but because vested interests have close ties to those in power. In addition to private monopolies, the country has retained many government monopolies of the former Soviet Union. All of these monopolies should be promptly broken down or eliminated. This is particularly relevant for government monopolies in revenue-generating activities, which can be carried out more effectively by private companies.

Government monopolies use their position to inhibit competition as they enjoy privileges not available to the private sector, including easier access to government decisions, preferential tax treatments, subsidies, inconsistent pricing, inconsistent procurement, etc. Today, government monopolies and quasi-monopolies are competing unfairly with the private sector in many revenue-generating sectors, such as oil and gas, electricity generation, water supply, transportation and logistics, etc.

The elimination of government monopolies should be accompanied by the privatization of the majority of the 3,500 state enterprises that are still operating and providing illegal benefits to selected people. The role of the government should be to support private sector activities, rather than to suppress or compete with them.

(2) A second priority to create a free and competitive market economy is to stop grand-scale corruption. The country has been continuously exploited by groups of individuals that maintained control of key posts in various agencies, including the cabinet of ministers, the parliament and the judiciary. They have siphoned billions of dollars from the country, which has cost Ukraine up to $200 billion per year in lost GDP since independence. The new leaders should just take the lead in refusing to receive “money briefcases”.

These examples would encourage others to do the same and also to refuse to pay or take bribes. This should be complemented by a comprehensive framework to fight widespread corruption in the country. Ukraine is not unique in facing corruption.

Countries that have been successful in stopping corruption have used a three-tier framework that includes measures to (1) prevent corruption by making it more difficult and more costly to undertake; (2) ensure effective enforcement by a responsible and qualified judiciary; and (3) educate and secure public support for anticorruption activities.

In addition, in order to support economic growth in Ukraine, there is a need to deal with Russia's aggression, which is increasing political risks and dissuading investments. The new President and government will need to find ways to alleviate the hostilities supported by Russia in Crimea and Donbass. This should include an agreement with Russia to move its troops out of the country and terminate its hybrid warfare and misinformation campaigns.

Ukraine will also need to carry out intensive social programs and investments to win back the support of the eastern population. A strong and successful Ukraine would be the first line of defense in Europe. It would show other former Soviet Republics that are not yet reformed that it is possible to have another more successful path through open and democratic elections.

The election of President Volodymyr Zelenskiy provides a unique opportunity for a breakthrough and leap forward towards a more modern and more developed country – one that can improve the happiness and quality of life of Ukrainians and can support the EU and other countries in critical areas.

President Zelenskiy is an excellent communicator and has the support of over 73% of the Ukrainian people, with a clear mandate to change the status quo and improve the quality of life. These are unique circumstances that have created a moment of opportunity – to transform the country and implement the changes long needed to reach the levels already achieved by Ukraine’s peers.

NOTE:  This publication is the work of The Bleyzer Foundation (www.BleyzerFoundation.org), a Kyiv-based internatioal non-profit organization whose mission is to promote the development of the private sector and the use of best practices in government policies to create investment-friendly and business friendly enviroments.