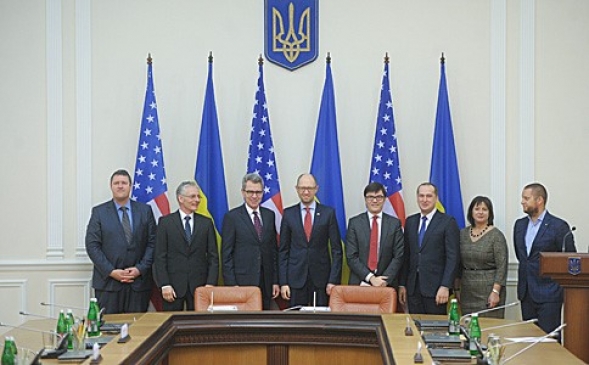 U.S. $100 million investment in the Yuzhny port by Cargill & MV Cargo Company means additional jobs, enhanced export potential and another proof of real partnership between Ukraine and the United States

KYIV - The Government of Ukraine hosted on Wednesday, February 24, 2016 a ceremony of the signing of an agreement between Cargill (USA) and the MV Cargo company on the planned investment in the construction of the grain terminal at the Black Sea Trade Port of Yuzhny. The agreement was signed by Cargill's CEO  for Ukraine Martin Schuldt and the MV Cargo company’s Director Andrii Stavnitzer according to a news release from the Cabinet of Ministers.

The agreement on investment in the construction of a grain terminal at the port of Yuzhny by an American company Cargill means additional jobs, enhanced export potential of Ukraine and another proof of real partnership relations between Ukraine and the US, said Prime Minister of Ukraine Arseniy Yatsenyuk during a ceremony of signing the deal on Wednesday, February 24.

There were also present at the ceremony Minister of Infrastructure of Ukraine Andrii Pyvovarsky, Minister of Agrarian Policy and Food of Ukraine Oleksii Pavlenko, Ambassador Extraordinary and Plenipotentiary of the United States of America to Ukraine Geoffrey Pyatt and Minister of
Finance of Ukraine Natalie Jaresko.

The Prime Minister reminded that seven months before in Washington there had taken place the first investment conference Ukraine – the USA, which was led by U.S. Secretary of Commerce Penny Pritzker, and during which Vice President of the United States Joe Biden addressed the participants.

Arseniy Yatsenyuk noted that the investment conference in Washington had been "the beginning of a campaign to attract investment from the United States to Ukraine": "This was the first step for Ukraine to present itself so that our American partners could see that Ukraine is really reliable and right place for investment".

During the conference one of the world's largest companies, Cargill Incorporated, first indicated an interest in investing US $ 100 million in the construction of a new grain terminal at the Yuzhny port.

Arseniy Yatsenyuk congratulated the American and Ukrainian business on this agreement: "We as the Government did a lot to make this kind of investment real," he said, noting the work of the Minister of Infrastructure of Ukraine Andrii Pivovarsky in the development of port infrastructure "that such grain terminal could actually become one of the largest hubs in Ukraine."