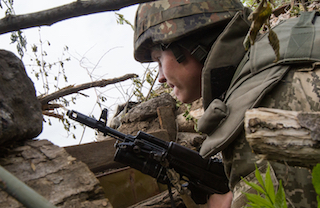 I just wanted to share an article in this week’s Kyiv Post by UFFs Executive Director, Viktor Plakhuta

Viktor has been working the past six months alone and in coordination with other NGO and foreign allied organizations to identify all the areas in the defense sector where corruption is hindering military readiness.  He is actively soliciting foreign assistance organizations to help implement a program to help bring transparency and efficiency to Defense Procurement.

As threatening as Putin’s Russia is to Ukraine’s security, internal corruption is the main obstacle to Ukraine’s security and ultimate success.  Because the defense sector relies on confidentiality for national security reasons (unlike other the sectors of the economy), corrupt individuals are exploiting this secrecy for personal gain, diverting funds from needs of the soldiers on the front and from legitimate military-industrial development cloaked by the security laws Viktor is trying bring in line with western standards.

While UFF is in discussion with major foreign donors to launch wider reform programs, we’re thankful to those of you who continue to give money to keep the lights on.

Text of the article:
One of Ukraine’s priorities should be creating new plants for manufacturing defense goods, and improving those that already exist. The State Defense Order is a classified procurement plan. It includes research & development, procurement of already-approved goods and services by defence agencies, repair, and increasing or creating new defence facilities. The final category can be used to:

create and implement specific technologies and materials for creating and modernising defense items;

set up the serial manufacturing of defense goods; and

The Ministry of Economic Development and Trade is the main manager of State Defense Order budget funds used for increasing or creating new defense plants, and the responsible executor of defense-related budget programs. The recipients of these budget funds are defense enterprises that are defined as an executors of the State Defense Order. The costs for the increasing or creating new defense facilities are provided by the “State Programs of Defense Industry Reform and Development by 2021.”

This program, as of today, is on the final stage of approval.

Program activities and costs are classified.

The only information available to the public is information included in the national budget, in which an overall figure is provided for the implementation of state programs of defense industry reform and development, the development of new technologies, and the increase of existing production capacities for the purpose of defense goods manufacturing.

But there are a number of corruption risks that arise in how funds are spent on defense production is spent.

The MEDT is the coordinating agency for the State Defense Order; it is also responsible for checking the budgets of all defense agencies and how those funds are used. It is therefore charged with checking its own distribution of funds.

The MEDT is tasked with distributing funds to state-owned enterprises, but lacks information on the real situation within these enterprises. Without access to information, the MEDT is unable to accurately calculate the financing needed for their work, and to monitor its delivery.

The fact that the MEDT is the customer, but is not the ultimate owner and user of the plants created in this process, creates an unnecessary layer of complexity, which hinders effective control and scrutiny

The history of the problem

According to the Law of Ukraine “On the State Defense Order” as well as acts of the Cabinet of Ministers of Ukraine, the MEDT is the government body that orders goods and services using State Defence Order funds and system. They are expected to use this to increasing or creating new defence facilities.

The final category can be used to increase of existing production facilities; create and implement specific technologies and materials for creating and modernising defense items creation and acquisition of special and military equipment preparing for defense goods manufacturing; setting up the serial manufacturing of defense goods; and design, development and implementation of new special technologies.

According to the defense order, state customers – central executive bodies and other state bodies listed by the Cabinet of Ministers of Ukraine – are the main spending units.

According to the state budget of Ukraine for 2016, Hr 785 million ($30 million) are provided for the budget special fund balance for the MEDT, intended for increasing or creating new defense plants.

Given the lack of revenues to the “special fund balance,” the Cabinet of Ministers of Ukraine in October, adopted a decree on redistribution of funds between budget programs of Ministry of Economic Development and Trade in the amount of Hr 125 million UAH ($5  million). So in 2016, the ministry has spent Hr 125 million on creating new and increasing of existing production facilities.

According to the state budget for 2017, 0.5 percent of the gross domestic produce, or approximately Hr 12 billion, is provided for the special fund for the MEDT to increase or create new defence facilities.

Conflict of interest in the role of the MEDT

By law and an order of the Cabinet of Ministers, the MEDT is defined as the central executive authority authorized to coordinate the implementation of the state defense order, as well as the state defense order’s state “customer.” No structural subdivision inside the MEDT was established in order to carry out its State Defense Order customer function. Such sub-unit would carry out contractual services, monitor and accept results of public contracts, carry out planning and reporting, etc. This means that the MEDT is effectively tasked with both spending the money, and checking how it is spent.

In theory, the MEDT provides a request for all state defence enterprises funding to the NSDC; in practice, this is taken directly from UkrOboronProm with no scrutiny, and the MEDT is effectively a go-between. The MEDT does not get enough information to scrutinise the budget provided by UkrOboronProm, and lacks the resources in information to do so effectively. The MEDT is also unable to have its representatives at state-owned defense enterprises to get access to information on how the enterprises are working (unlike other state customers, including the Ministry of Dfense and State Space Agency, for example).

The SDO customer function was granted to the MEDT due to abolishment of the Ministry of Industrial Policy of Ukraine; its functions were delegated to the MEDT. But state-owned defense industry enterprises, organizations and institutions were not delegated under the management of the MEDT. Instead, they are currently managed by the State Concern Ukroboronprom, and – at a higher level – by the Cabinet of Ministers (collectively, without a particular minister in charge)

The MEDT lacks information about the real situation on enterprises under the control of Ukroboronprom, as well as their needs. It is therefore unable to calculate the volume of financing for current projects – which is its role as the ‘customer’.

There are also discrepancies in current legislation. When the MEDT was transferred the function of acting as a customer for the State Defence Order, it was done without taking into account the legislative requirements, making appropriate amendments to relevant legislative acts, and without making the organizational, structural and functional changes required for the MEDT to do this work effectively  For example, Order #464 of the Cabinet of Ministers contradicts components of the Law of Ukraine “On peculiarities of state-owned defense industry management.”

One corruption risk that arises is the MEDT contracting with multiple suppliers, instead of the primary contractor completing a project. The MEDT financed a project to develop manufacturing facilities for production of “Vilha” missiles, for example.[12] Article 5 of the Law of Ukraine “On the State Defence Order” says that the MEDT should contract with the main fulfiller of a particular good or service. In contravention of this, the MEDT signed several government contracts not with the main contractor of the project “Vilha”, but with its co-contractors. As a result, the contractors bought different production facilities, and the MEDT was unable to see whether the various enterprises could manufacture the final product. So the corruption risk arises because the MEDT – in other words the customer – is unable to confirm whether the final intended product is delivered.

The process of using the MEDT creates an unnecessary complication. Ultimately, this arises because the MEDT is not the ultimate user or owner of the facilities it creates. According to Article 9 of the Law of Ukraine on the State Defence Order, the MEDT can use only one type of contract. According to this type of contract, the MEDT should be the final order of the facility purchased. In contravention of this, the MEDT does not own any of these facilities, in law or practice. Instead, it is simply a means of transferring money from the state budget to Ukroboronprom and its subsidiaries. Because the MEDT is not the final owner of the facilities it purchases (and cannot, in practice, scrutinise the products purchased), its role simply adds an additional complex layer to the process, making oversight, control and scrutiny difficult – if not impossible.

A counterpoint: the example of State Space Agency of Ukraine

State Space Agency of Ukraine is also involved in the preparation of defense production. The difference in the mechanism of allocation of state finances in between State Space Agency of Ukraine and Ministry of Defense, compared to that of the MEDT, is that enterprises which are receive funding from space agency are directly under the management of the agency. Consequently, the SSAU (unlike the MOD) has more tools to determine the needs of enterprises.

International experience indicates that the scheme of financing state enterprises through the Ministry of Economy takes place only in some post-Soviet countries. A look at the historical roots makes clear why: in the former Soviet Union, weapons and equipment manufacturing, developing of new systems etc. acquired a large scale. Deploying defense industries required significant investment to create closed cycles of development and manufacturing, the construction of new enterprises, and military installations for certain weapons systems. State customers were unable to undertake such expenditures, so a number of ministries were determined as “state customers” of these operations.

The volume of defense products manufacturing in Ukraine is much smaller than in the last century. The funding of new and increase of existing production plants makes up only a small part of the overall State Defense Order funding. Moreover, the existence of additional funding processes directly related to the development and production of weapons, is an outdated model.

This briefing points to one clear recommendation: the Cabinet of Ministers should issue an order removing the State Defense Order customer function on financing defence industry facilities from the MEDT, and placing it instead with the Ministry of Defense.

This would resolve a number of the issues outlined in this briefing. It would, for example, remove the conflict of interest the MEDT faces, and simplifying the process of creating and improving defence production facilities. It would also enable the government to combine the costs of creating facilities and purchasing goods under one procurement agency – the Ministry of Defense, which is the actual customer of defense products.