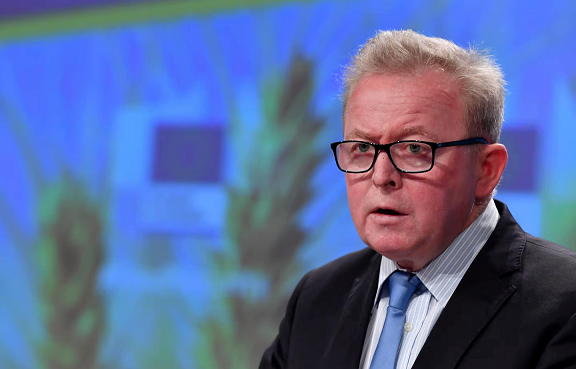 EU farm chief warns Russia wants to portray itself as feeding the poor, while it destroys Ukraine’s farmland.

Brussels is going to propose a way for some food exports to get around Russia's Black Sea blockade, by taking the overland route.

The European Commission will on Wednesday unveil a plan to significantly increase the amount of food that agricultural heavyweight Ukraine can deliver to hungry nations around the world via EU roads and railways.

This is intended to help combat a problem that Ukrainian President Volodymyr Zelenskyy raised this week, fulminating that the blockade of the port of Odesa was probably something that had not "happened since World War II" and that dozens of countries now faced shortages because of Russian aggression.

EU farm commissioner Janusz Wojciechowski announced the "plan of action" at the opening of a U.N. food agency meeting in his native Poland, saying the bloc must counterbalance Russia's deliberate destruction of Ukraine's agriculture by expanding export channels and repel Moscow's efforts to portray itself as a humanitarian actor that is feeding the world in a worsening food crisis.

"It’s necessary to organize alternative corridors for export, especially for wheat, corn because Ukraine has a lot of stocks," Wojciechowski told POLITICO. "We want to ensure supply chains for food for Europe and the rest of the world," he earlier told a room of diplomats from 53 European and Central Asian countries, at a biennial regional conference of the U.N.'s Food and Agriculture Organization.

Ukraine and Russia are both gigantic exporters of food to import-dependent countries in Africa and the Middle East, but Russia's attack by land and sea has left millions of tons of Ukrainian grain stuck in silos unable to leave in ships by the Black Sea, which traditionally accounted for at least 80 percent of Ukraine's food exports.

The EU commissioner also sent a stark warning that Russia will seek to turn the situation further to its own advantage when it comes to food. Not only could Moscow steal Ukraine's share of the global market for commodities like corn and wheat, but it will attempt to whitewash its image as a charitable provider to poor countries, just as it blockades Ukraine's own supplies, he warned.

“This is the Russian propaganda. They are destroying intentionally Ukrainian [agricultural] potential ... and the next steps will be that they are friends of the world and they portray themselves as the savior," he said.

"The main solution is corridors to [Poland's] Baltic Sea ports," the commissioner said, mentioning Gdańsk and Gdynia. He played down the feasibility of setting up humanitarian corridors to export food from the Black Sea, describing it as "possible but not the main solution."

Before the war, Ukraine was able to export around 5 million metric tons of grain and up to 700,000 tons of sunflower oil per month via the Black Sea, but despite making strides to swiftly ramp up export routes by rail, efforts are being hampered by burdensome logistical problems. Ukraine's railways are not built for exporting such quantities of food, and there is a difference in the gauge of railway tracks between Ukraine and Poland, making it necessary to unload and reload each train that crosses the border.

"We lack European wagons with the narrow widths between the wheels. We still also lack the capacity to change the wheels to the standard of the European Union,” explained Roman Slaston, the general director of the Ukrainian Agribusiness Club. He said Ukraine is currently nowhere near reaching capacity for exporting food by rail, and described "very big queues" of railway wagons on all of Ukraine's borders with the EU, sometimes backing up for 10 or 20 days.

In April, Ukraine managed to export less than 1 million tons of grain, which is around a third of what it managed in the same month last year, according to market research firm APK-Inform. Ramping up export capacity would help Ukraine's farmers financially, and the country's economy.

Mariia Dudikh, the director of the Ukrainian National Agrarian Forum, said that at this rate it would take 24 months to export the current grain stockpile, which she estimated stands at around 14 million tons of corn and over 4 million tons of wheat.

To make matters worse, unless the military situation on the Black Sea rapidly improves, the problem of blocked exports will be compounded by the arrival of a fresh harvest in two or three months, as evidence mounts that Russia is deliberately targeting grain storage infrastructure such as warehouses.

Dudikh said plans were being discussed between Kyiv and EU ministers to construct a brand new railway going from Ukraine to the Lithuanian port of Klaipėda but attendees at the conference in Poland were less enthusiastic about that idea, saying it would take years to build.

Wojciechowski said many Commission departments were involved in drafting the plan but that he took the lead after holding talks with Ukraine's Agriculture Minister Mykola Solsky in Lithuania last month.