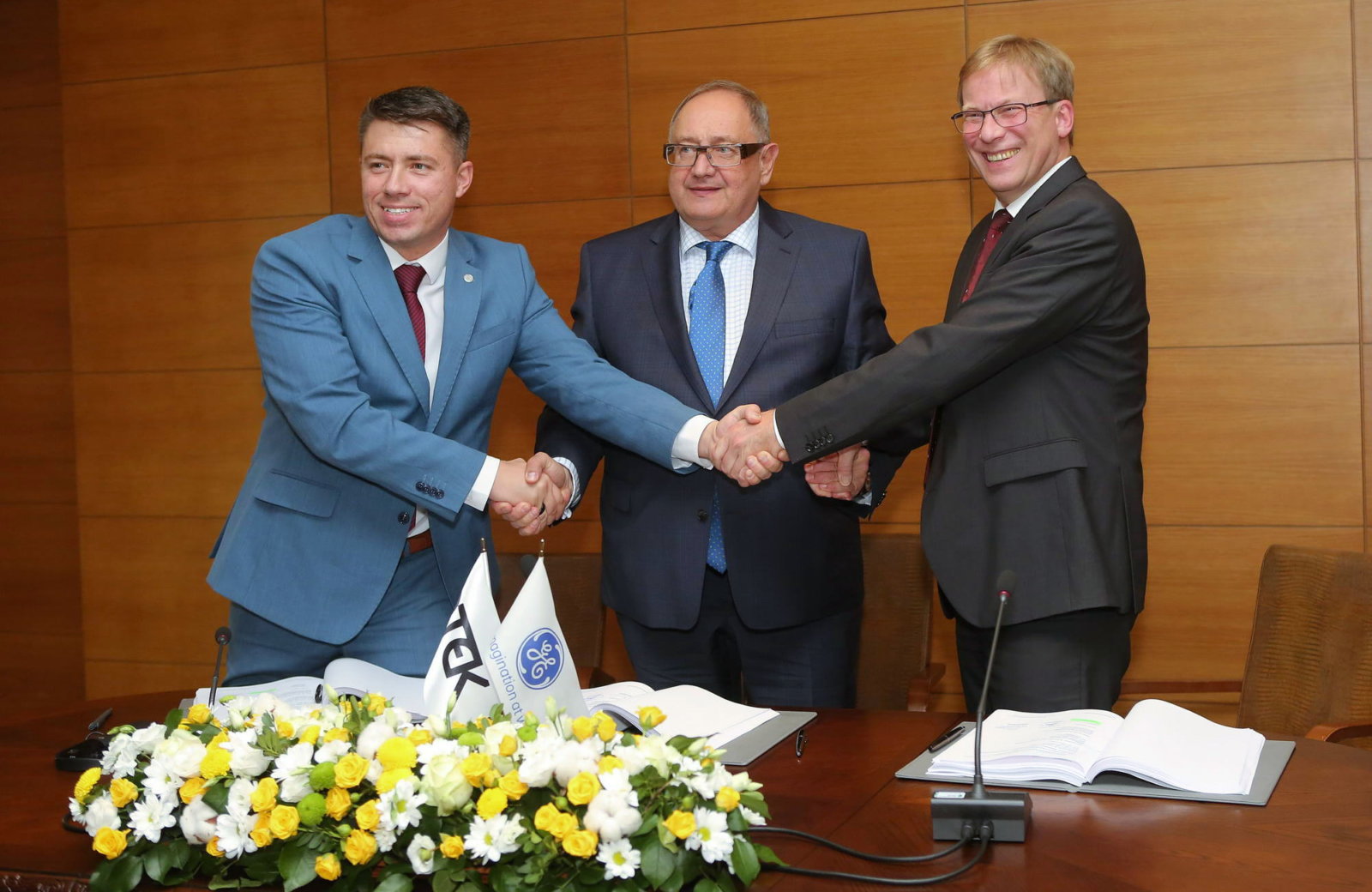 The new turbines will be erected on the shores of the Azov Sea in the same area of Zaporizhia Oblast, some 700 kilometers southeast of Kyiv.
“This … proves that Ukraine is really developing in renewables, into which 900 million euros has already been invested since 2015,” said Sergiy Savchuk, the head of the State Agency on Energy Efficiency and Energy Saving of Ukraine.

The 26 turbines have a generating capacity of 3.8 megawatts each.

The first contract between the two companies for the first 100-megawatt phase of the project was signed with GE in December 2017, and work on it will be completed by the end of 2018. DTEK’s total investment in the second phase of the Prymorska wind farm will be around 150 million euros, the same as in the first phase.

In the picture: Vyacheslav Feklin, CEO at General Electric Ukraine, Yuriy Zhabskiy, director of DTEK wind farm and Guido Schumacher, GE Energy's Commercial Director for Wind Turbines for Europe shake each other hands after signing a contract for construction second phase of a 200-megawatt Prymorska wind farm on Oct. 17. Photo by DTEK

The second stage of construction of the wind farm will start in the fourth quarter of 2018.

DTEK already owns Ukraine’s largest wind power plant in Botievo in Zaporizhia Oblast, about 40 kilometers to the west of Prymorsk, which has a total capacity of 200 megawatts, as well as the 10 megawatt Tryfanivska solar power station in Kherson Oblast.

“By end of 2019, the company plans to have 1,000 megawatts of capacity in solar and wind power plants. This goal requires a huge investment that exceeds 1 billion euros,” said Maxim Timchenko, the CEO of DTEK.

Created in 2005, DTEK manages the energy assets of System Capital Management, owned by the Ukrainian oligarch Rinat Akhmetov, Ukraine’s richest person.
The company currently produces 49 percent of the country’s coal and generates 70 percent of its power. However, according to Timchenko, DTEK’s priorities are now aimed at building up new renewable energy capacities as well as heavily investing in gas production.

“Renewables are the future energy around the world, and DTEK is helping to bring this future closer to Ukraine,” said Alex Dimitrief, the CEO of General Electric Global.
In Ukraine, after the completion of the construction of two phases, the savings of carbon dioxide emissions into the atmosphere will be some 700,000 tons per year, according to DTEK’s press release on the GE contract.

“Today, wind energy in the world is seen as a technology that prolongs people’s lives,” said Andriy Konechenkov, chairman of the Ukrainian Wind Energy Association, commenting on DTEK’s renewables investment.