John McCain lifted the spirits of Ukrainians and the Nation..
who will speak for them now 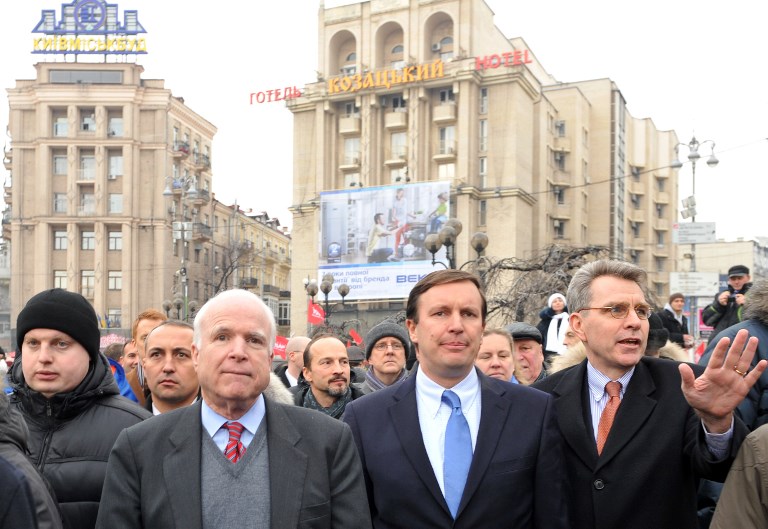 No American politician was stronger on Ukraine and tougher on Russia than McCain...Ukraine was one of his great foreign policy passions.

KYIV-- When Ukraine faced some of its darkest and most dangerous times, it was often not the voice of a Ukrainian politician who lifted the spirits of the nation.

It was the voice of U.S. Sen. John McCain, who died from cancer on Aug. 25 at age 81 and who traveled several times to Ukraine.

The Republican from Arizona conveyed his passion for the rightness of Ukraine’s cause in defeating its external enemy, Russia, and its internal enemy, corruption. And in so doing, he not only lifted the spirits of Ukrainians, he got under the skin of Russian dictator Vladimir Putin.

I believe his last visit to Ukraine came on New Year’s Eve, Dec. 31, 2016, when he spent time with Ukrainian troops in Mariupol, 800 kilometers southeast of Kyiv.

While most of the world was celebrating and not paying attention to him, McCain and other senators chose make the frigid trip to show solidarity with Ukraine’s fighting men and women.

“Our message tonight is that in 2017, we will defeat the invaders and send them back to where they came from. And to Vladimir Putin, you will never defeat the Ukrainian people and deprive them of their independence and freedom,” McCain told the soldiers, thankfully preserved on YouTube. “I thank all of you for your service. I send the message from the American people. We are with you. Your fight is our fight. We will win together.”

To wounded soldiers and their families, he said: “We will never, ever forget you.”

Who is going to do that today?

And who even did that then?

No American politician was stronger on Ukraine and tougher on Russia than McCain. U.S. President Barack Obama, for all of his strengths, was weak on Russia and outsourced visiting Ukraine to his vice president, Joseph Biden.

McCain gave an interview to the Kyiv Post on Dec. 15, 2013, amid the EuroMaidan Revolution that toppled Ukrainian President Viktor Yanukovych more than two months later.

Re-reading the interview today, he was prescient on three issues, including Russia’s threat to Ukraine, the power of Ukraine’s oligarchs and the unlikelihood that Ukraine will fight corruption quickly.

On the decisive role of Ukraine’s oligarchs in the revolution: “It’s true that the oligarchs are very (or the) most important factor in whether this whole effort will succeed or not. There are varying degrees of support from these oligarchs, from all-out support to distance, and everything in between. Some of them, to be frank, their attitude is dictated by what they think is the chance of this movement of succeeding is.”

And, a third useful point, which I overlooked this all these years, is when McCain also cautioned against making promises of throwing corrupt officials in jail – at least until after the revolution succeeded and the transition of Ukrainian government took place. However, Ukraine’s politicians have taken this to the extreme – not throwing anybody in jail for any corruption in the nearly five years since the revolution.

Asked about the wisdom of immediate action against corruption, he told the Kyiv Post then: “I think it’s something that’s much better to give some time because too often there is a change of government, and people are thrown in jail…I think the most important thing is for a transition to take place, not the threats or aspects of it that may impede that transition.”

He would later, in 2015, return to Ukraine to call for more action against corruption in a visit that included a trip to Odesa Oblast to meet with then-Governor Mikheil Saakashvili, who was kicked out of Ukraine by President Petro Poroshenko. That year, he also refused Poroshenko’s offer to make him part of Ukraine’s International Advisory Council on Reforms.

On March 9, 2017, the Kyiv Post named him “Ukraine’s Friend of the Week,” not for anything specific that week so much as his long history of support for Ukraine.

We wrote at the time: “McCain also has had some memorable taunts of Russian dictator Vladimir Putin, saying he looked into his eyes and didn’t see his soul (as ex-U.S. President George W. Bush once said). Rather, McCain said, he saw three letters: ‘KGB’ after Putin’s background in the Soviet Union. He also has taunted Putin’s leadership, calling Russia in 2014 ‘a gas station masquerading as a country.’”

He had a great op-ed published in USA Today on March 13, 2017, which should be read by everyone. It included advice that should be heeded by all politicians and public servants today: “There is no placating Putin. There is no transforming him from a gangster to a responsible statesman. Previous administrations have tried and failed not because they didn’t try hard enough, but because Putin wants no part of it. He rejects our values and our vision of a free, stable, peaceful, prosperous international order.

By not mincing words, he earned the enmity of Putin, who banned McCain from visiting Russia, a sanction that the senator wore as a badge of honor.

He began taunting Putin all the way back to Dec. 16, 2011, and probably earlier, when the Kremlin dictator (then prime minister) faced demonstrations over unfair parliamentary elections and his attempt to return to the presidency. He wrote: “Dear Vlad, #The ArabSpring is coming to a neighborhood near you.” Putin responded by saying that McCain went “insane” from his five years as a prisoner of war in Vietnam.

“Vladimir Putin is a thug and a murderer and a killer,” McCain told American journalist Fareed Zakaria on March 26, 2017, a sentiment he repeated often.

Until the end, McCain pushed for tougher sanctions against Russia and stronger support for Ukraine as it withstood the Kremlin’s dismemberment of the nation.

He said democracy “must have a free and adversarial press” and at the Munich Security Conference in 2017 reminded the world that “Russians are killing Ukrainians every single day.”

Ukraine was one of his great foreign policy passions.

Ukraine also gave him one of his proudest memories. Before it was set on fire during the revolution, Ukraine’s Labor Center on Independence Square had a suite that offered the senator, along with visiting dignitaries, a bird’s eye view of the revolution under way below.

In Kyiv, McCain warned Putin that his people will be coming for him soon, just as Ukraine’s people were coming for Yanukovych. Later, at the Atlantic Council in Washington, D.C., he called his December 2013 visit to Ukraine “one of the most moving experiences I have ever had.”

Ukraine’s ultimate fate — whether it defeats Russia abroad and corruption at home — will be decided only by Ukraine. America, including McCain when he was alive, could only at best play a supporting role.

It’s that doubtful Ukraine will get another champion like McCain anytime soon. Biden, among U.S. politicians, comes the closest.

But if Ukraine truly wants to honor the legacy of one of its best friends, its politicians and people will summon the to defeat both threats to the nation’s survival: Russia and corruption.

Sadly, as McCain leaves life, victory is not at hand in either fight. 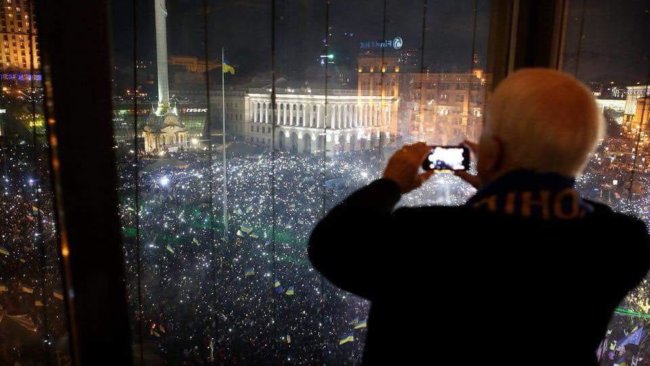 NOTE:  The Kyiv Post is a member of the U.S.-Ukraine Business Council (USUBC), www.USUBC.org. The OP-ED, commentary and opinion expressed by Kyiv Post Editor, Brian Bonner, is distributed for information purposes only.  The views. opinions and statements expressed are the views and opinions expressed of the author and do not necessarily reflect the official policy or position of  USUBC or its members.