The U.S.-Ukraine Business Council (USUBC) with support from the People of Ukraine Foundation, facilitated
and sponsored the shipment of the Sonevytsky collection to the Ukrainian Catholic University (UCU) in Lviv
By Askold Krushelnycky,  Kyiv Post, Kyiv, Ukraine, May 17, 2019

ARLINGTON, Virginia — Rostyslav Sonevytsky had an undying love for two things: music and the country that he left as a young boy amidst the tumult of World War II. Now that love has become an unusual gift to Ukrainian Catholic University’s Metropolitan Sheptytsky Cultural Center in Lviv.

Sonevytsky, who was born in Ternopil in 1933, studied at the Lviv music conservatory with dreams of becoming an orchestra conductor. Then, the war shattered that ambition and he was forced to leave his homeland in 1944. He eventually arrived in America as a refugee in 1950, and, after completing U.S. military service, he obtained a master’s degree in economics from Columbia University in New York.

He found professional success as an economist. But music remained a vital part of Rostyslav’s life. He began acquiring an extensive collection of classical musical scores and gramophone records that he continued to build until his death in 1995.

“Rostyslav was always concerned about what would happen to his collection,” Chrystia Sonevytsky, Rostyslav’s wife, said. “He wanted it to be kept together and for it to be a resource for students of music and music history.”

At her home in Arlington, across the Potomac River from the American capital Washington, there was an atmosphere of excitement mixed with emotional recollections on May 11, as Chrystia and some helpers dispatched the collection to Lviv to fulfill her late husband’s wish.

Chrystia was also uprooted by the war. Her parents left their home in what is now western Ukraine in January 1940 and she was born in Poland later that year. After the war she and her parents lived in refugee camps in Austria until emigrating to Canada in 1949. 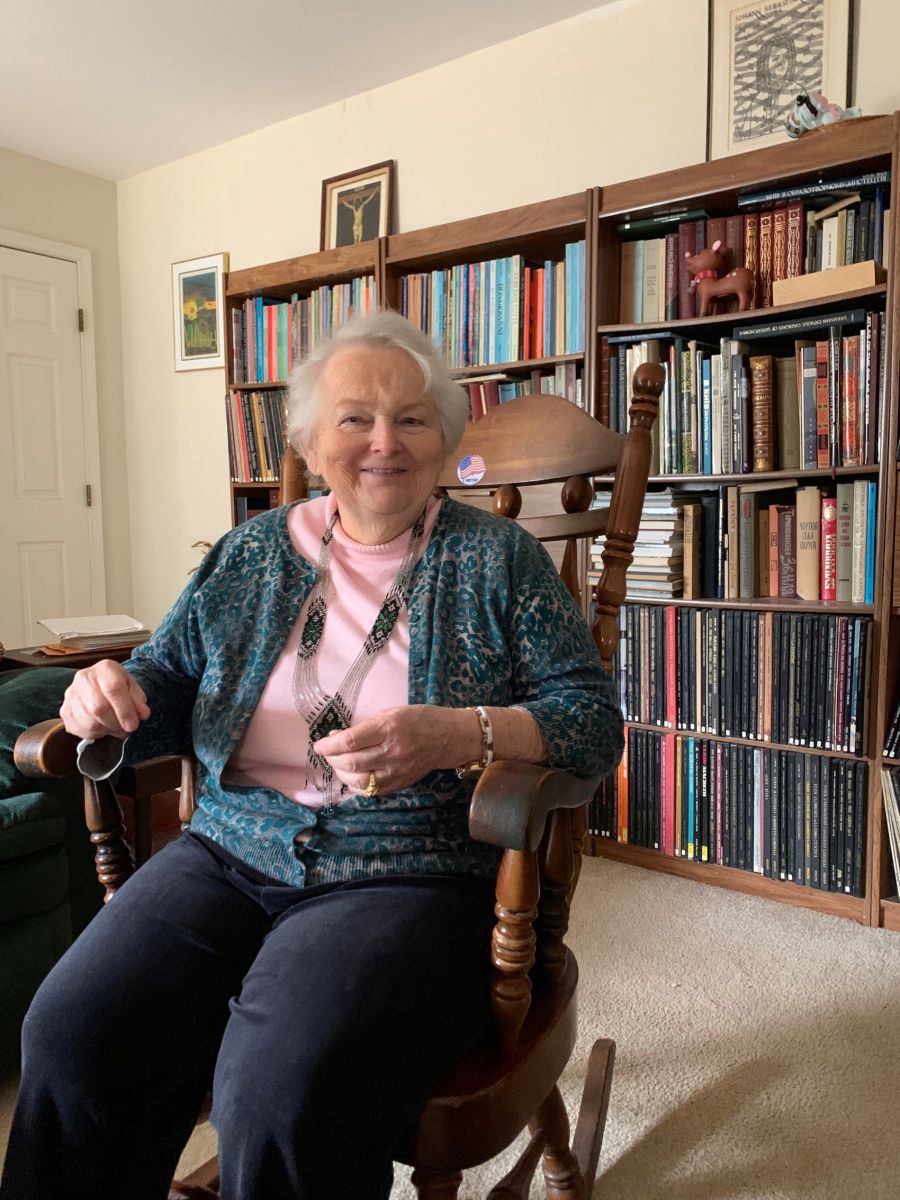 In the picture: Chrystia Sonevytsky next to the music library in her house in Arlington, Va. (PHOTO – People of Ukraine Foundation)

CHRYSTIA AND ROSTYSLAV MARRIED IN 1977

The couple married in 1977. Both were very active members of the Ukrainian community in North America and took part in the diaspora’s work to promote awareness about Ukraine and its independence aspirations when the country was part of the Soviet empire.

After Ukrainian independence, their home was always open to visitors from Ukraine, both private individuals and officials. They helped Ukraine’s first diplomats and officials establish the new country’s presence in official America. They were always ready to support efforts to help Ukraine with their own work and financial contributions.

In the early 1990s, a visiting Ukrainian economist told Rostyslav that there was no English-Ukrainian dictionary to explain economic terms. That was proving a handicap for many in both the Ukrainian government and in private enterprise who were involved in often complex negotiations or proposals with Western partners.
So Rostyslav worked in his free time to produce a dictionary explaining in Ukrainian the meaning of some 5,600 terms. Published in 1995 and entitled “Basic Economic and Financial and Business Terminology,” it has been used by many Ukrainian ministries and educational establishments. It remains, as far as Chrystia knows, the only work of its kind in Ukraine.

Chrystia has also devoted much time to Ukrainian causes, often with a focus on education and youth. 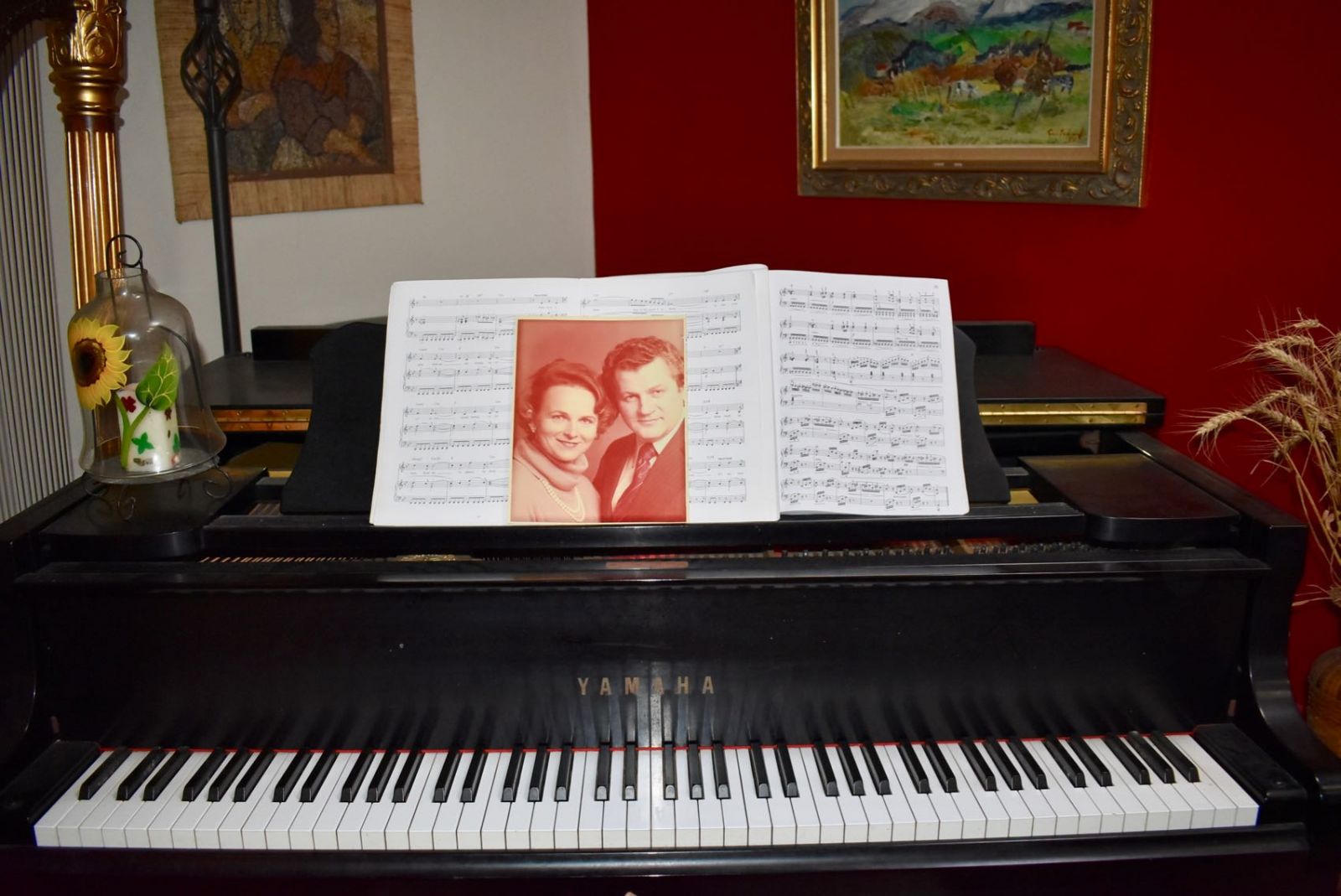 She initiated the “twinning” of Arlington, where she has lived since 1989, with Ivano-Frankivsk, the city in western Ukraine where her own mother studied. That “Sister Cities” project has helped arrange exchange visits for dozens of students from both countries.

Rostyslav’s family had a strong musical background. His mother was a pianist and his aunt an opera singer. His older brother, Ihor, studied at musical academies in Vienna and Munich and became an accomplished pianist and conductor.

Ihor Sonevytsky composed an opera, a ballet, chamber music, piano works and choral music and lectured at the Ukrainian Catholic University (UCU) in Rome. After he died in 2006, his archive went to the UCU in Lviv.

Although Rostyslav’s career was not in the world of music, Chrystia told the Kyiv Post that music was the constant motif that ran through her husband’s life.

“With his first paycheck, once he started working, he bought a classical record and he kept doing that every time he was paid for the rest of his life,” she said. “He also started buying music scores. Often he bought more than one score for the same piece of music as he wanted to compare different arrangements by various artists.”

She said the couple regularly attended classical music concerts and operas. However, her husband’s great joy was listening to concerts on radio or his gramophone records and following the music on the scores to understand how various conductors interpreted the original composer’s work.

German Richard Wagner was among Rostyslav’s favorite composers, and he delighted in Wagner’s opera “Tristan and Isolde,” which he and Chrystia attended many times.

Scores and recordings of Wagner’s works form the largest portion of the collection, which encompasses the most important, and some less famed, classical composers from around the world. 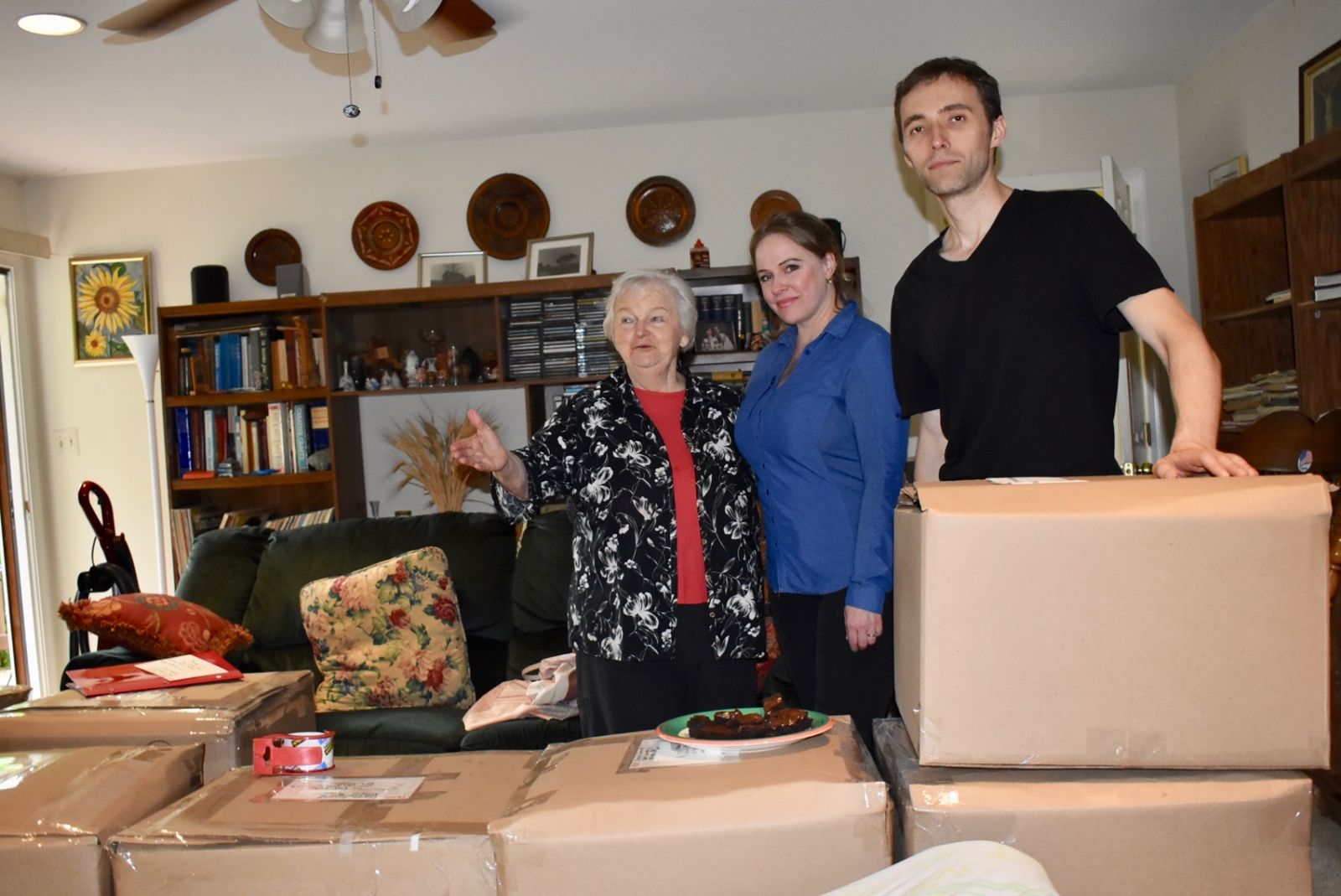 Rostyslav only traveled to Ukraine once after the war, arriving with his wife on independence day in 1991. But he made sure to visit Lviv and the music conservatory that had left a lasting influence on him and about which he often fondly reminisced.

So for Chrystia, who has been a frequent visitor to Ukraine, Lviv always seemed the natural destination for her husband’s rare collection. As she discovered more about the UCU and its new information and cultural center — which is named in honor of one of the Ukrainian Catholic Church’s most important and inspiring leaders, Metropolitan Andrey Sheptytsky — she became convinced its modern archival facilities would provide the best home for the collection.

After discussions with the center’s director, Oleh Yaskiv, Chrystia set about the complicated task of transporting 794 vinyl records, 220 music scores, and many books about music to Ukraine.

She received valuable assistance in that from the U.S. -Ukraine Business Council (USUBC) and its president Morgan Williams, who has known Chrystia for 20 years, and Tanya Shea, who runs a volunteer group called the People of Ukraine Foundation.

Williams praised Chrystia’s great track record “in a very large number of humanitarian, cultural, educational and historical-related projects to support Ukraine and promote Ukraine in the U.S.A.” He and the USUBC have previously supported education-related projects in Ukraine and, as soon as he learned about Chrystia’s plan, Williams happily pledged to help out. 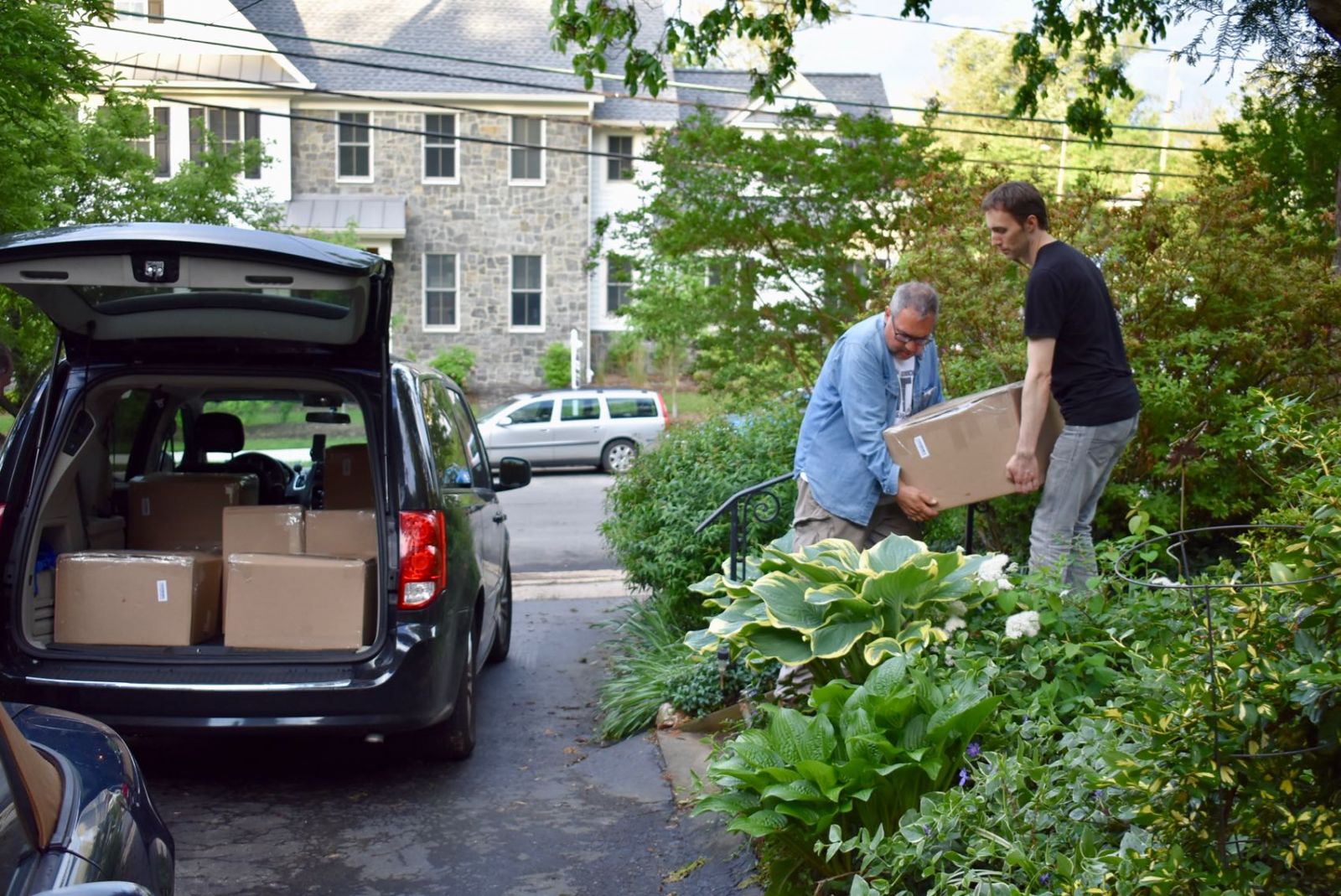 Two of USUBC’s Ukrainian staff, Nadiia Khomaziuk and Oleksiy Slusarenko, volunteered to assist with arrangements and themselves helped pack the collection into 19 large boxes weighing a hefty 805 kilos.

Kyiv-born Shea has lived in America for 20 years. Her foundation, started in 2016 with several volunteers in both the U.S. and Ukraine, has provided assistance to wounded Ukrainian military veterans and also served civilian needs.

She is particularly interested in education-related issues and believes Rostyslav’s collection will be a valuable asset for Ukraine’s students and scholars. Shea helped with arrangements for shipping the collection — due to arrive in Lviv in June — and even did some of the heavy lifting last weekend.

Chrystia sees the collection becoming part of the UCU archives as a fitting tribute to her husband’s passion for music and Ukraine.

“I’m sure the UCU will be thoughtful guardians of this legacy and it will make a significant contribution to the library and become a wonderful resource for musicians and those so inclined from other institutions and music conservatories in Ukraine,” she said. “That’s my dream and I’m sure that would be Rostyslav’s dream also.” 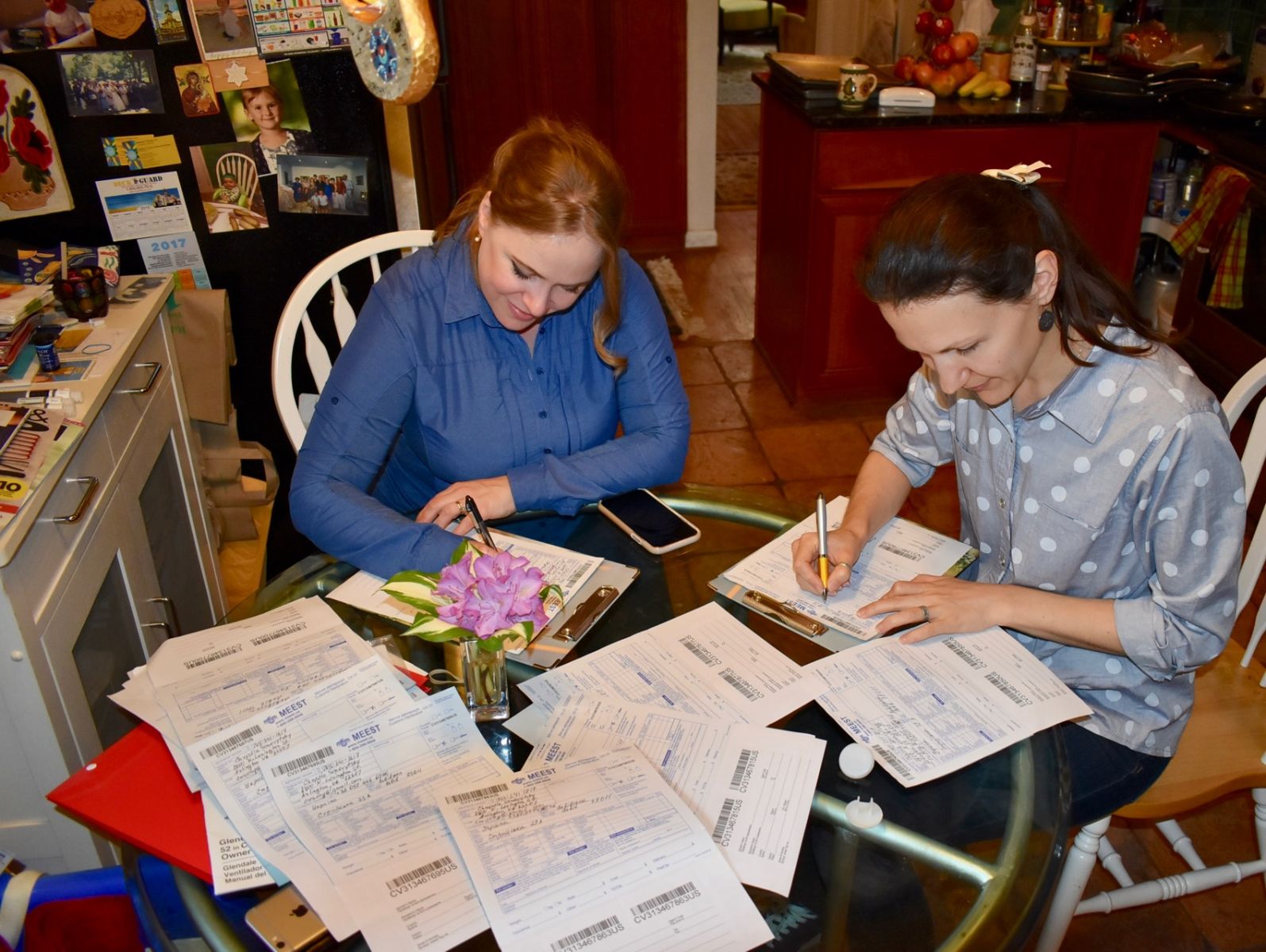 NOTE: USUBC appreciates the cooperation and help of USUBC member People of Ukraine Foundation, Tanya Shea, in packing, and arranging shipment of the entire collection to Ukrainian Catholic University in Lviv. A special thanks you to Askold Krushelnycky and Kyiv Post, a member of USUBC, for covering this story.