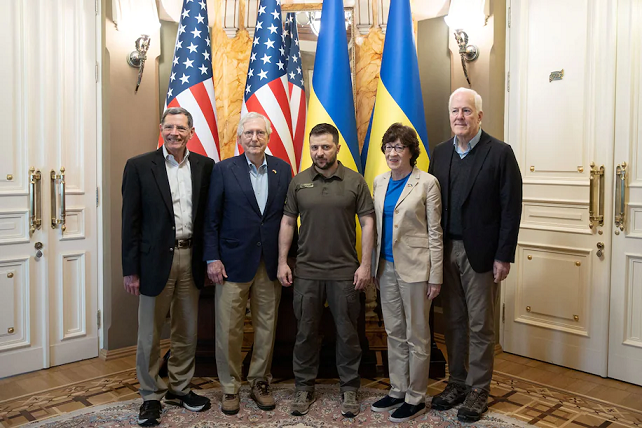 Ukrainian President Volodymyr Zelensky met Saturday with a U.S. Senate delegation led by Minority Leader Mitch McConnell (R-Ky.) in Kyiv, calling the visit “a powerful signal of bipartisan support for Ukraine from the U.S. Congress and the American people,” his presidential office said.

In Washington, however, a new round of funding for Ukraine’s battle against the Russian invasion is held up in the Senate because of a GOP member’s objection.

In a video posted by Zelensky to his Instagram page, McConnell and fellow Republican Sens. Susan Collins (Maine), John Barrasso (Wyo.) and John Cornyn (Tex.) were greeted by Zelensky on a Kyiv street.

“Russia is committing genocide against the Ukrainian people,” Zelensky said in a news release announcing the senators’ visit. “Europe has not seen such crimes since World War II.” 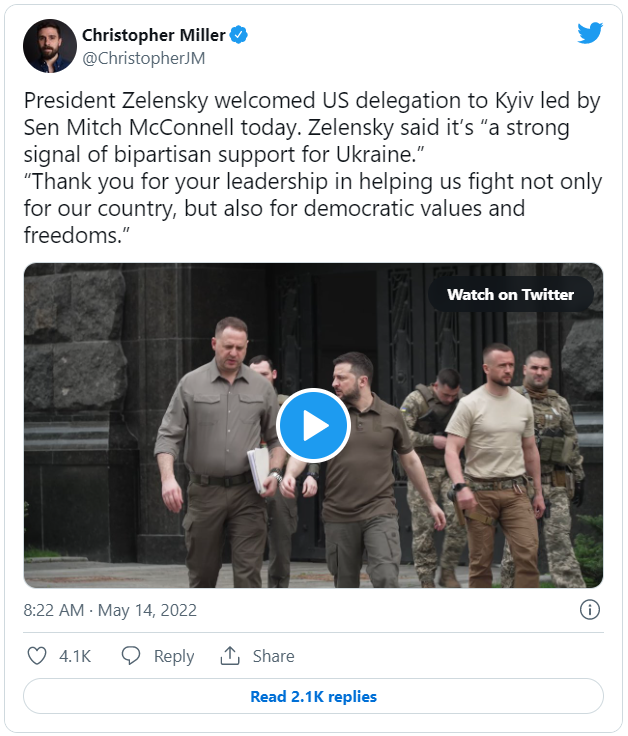 He noted “the special role of the United States” in ramping up sanctions on Russia and said he looked forward to further sanctions on Russia’s banking sector. “In addition, we believe that Russia should be officially recognized as a state sponsor of terrorism,” Zelensky said.

Officials with the Republicans senators did not immediately respond to requests for comment early Saturday.

Congress is poised to approve nearly $40 billion in additional military and humanitarian aid for Ukraine, outstripping President Biden’s $33 billion request and extending a fresh lifeline to Kyiv as Moscow plows ahead with its invasion in the country’s south and east. Passage of the measure, which was approved by the House earlier this week, would bring the total amount of Ukrainian aid provided by Congress since the invasion began on Feb. 24 to more than $53 billion.

The Senate is likely to follow the House in approving the package, but that effort has been delayed until next week after Sen. Rand Paul (R-Ky.) objected Thursday to an expedited vote on the assistance for Ukraine, dampening a bipartisan push to maintain steady aid to Kyiv. Paul, who has faced backlash but has stood by his decision, was able to single-handedly block the package’s advancement because the Senate requires unanimous consent to quickly move such a bill to a final vote. Now, the chamber must jump through all the usual procedural hoops.

Zelensky expressed hope that the Senate would quickly approve the nearly $40 billion package at a time when Ukrainian officials are negotiating with Russia to evacuate 60 “seriously wounded” people and medics from the besieged Azovstal steel plant in Mariupol. Zelensky described the negotiations as “very difficult” late Friday, adding: “We do not stop trying to save all our people from Mariupol and Azovstal.”

Despite the struggles in Mariupol, Ukrainian forces have gained ground in the Kharkiv region, pushing Russian troops north toward the border and reclaiming towns and villages in the area, a senior U.S. defense official told reporters Friday. The Institute for the Study of War, a Washington-based think tank, assessed that Ukraine “appears to have won the Battle of Kharkiv.” It added that the Kremlin has “likely decided to withdraw fully” from its positions around the city amid spirited Ukrainian counterattacks and limited Russian reinforcements.

The unannounced trip to Kyiv by McConnell’s delegation continued a parade of visits to Ukraine in recent weeks by U.S. and allied government officials, lawmakers and dignitaries to show support for the war-ravaged country and its embattled leader.

Secretary of State Antony Blinken and Defense Secretary Lloyd Austin met with Zelensky on April 24 in what was at the time the highest-level visit by an American delegation since the start of the war. On April 30, House Speaker Nancy Pelosi (D-Calif.) led a Democratic congressional delegation to Kyiv for talks with Zelensky. Pelosi vowed to the Ukrainian president that the United States is committed to “be there for you until the fight is done.”

First lady Jill Biden crossed the border into Ukraine last weekend, traveling to an active war zone in a rare move for the spouse of a sitting president. Biden entered the country from Slovakia on Mother’s Day and met Ukraine’s first lady, Olena Zelenska, who had not appeared in public since the Russian invasion began.

“I wanted to come on Mother’s Day,” Biden said before the start of a closed-door meeting between the two first ladies. “I thought it was important to show the Ukrainian people that this war has to stop, and this war has been brutal, and that the people of the United States stand with the people of Ukraine.”

Amy Cheng and Eugene Scott contributed to this report.