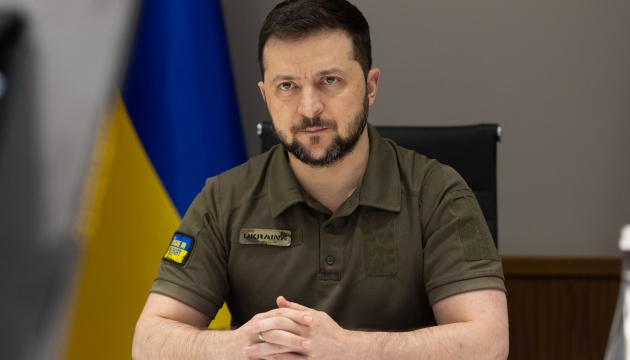 Ukrinform, Kyiv, Ukraine, Thu, May 12, 2022
"Look into their [Ukrainians'] brave eyes, shake their strong hands, and you will see that they are doing all this not for glory, that they need not only awards, but also concrete help and support."
President Zelensky in his speech at the award ceremony

Ukrainian President Volodymyr Zelensky believes courage is a Ukrainian national trait of character, and the Ukrainian people do not spare themselves for the sake of others.

The relevant statement was made by Ukrainian President Volodymyr Zelensky during his speech at the award ceremony of The Atlantic Council, receiving Distinguished Leadership Award for the Ukrainian people, an Ukrinform correspondent reports, referring to the Office of the President of Ukraine.

“On behalf of all Ukrainians, I would like to thank you for this award. It is a fair and correct gesture to honor with this award all the people of Ukraine, because courage is our national trait of character,” Zelensky told.

In his words, now the whole world witnesses and admires the heroism of Ukrainians but, at the same time, this should not become something ordinary for everyone.

“And for this we must say and remember that behind the courage and wisdom of our people, there are thousands of real stories, names and heroic feats. The world should know about them and to have a clear idea and understanding about the people of Ukraine,” Zelensky noted, telling the stories of Ukrainian servicemen and civilians working for the good of their country.

According to Zelensky, first of all, Ukrainians are the nation of the best defenders. These are Ukrainain ground forces, air and naval forces, airborne assault troops, special operations forces, the National Guard, intelligence, border guards, and territorial defense fighters.

The President of Ukraine also noted that Ukrainians are a nation where hundreds of thousands fight and millions help.

“These are millions of Ukrainians who are now defending their Homeland and the whole world. Do not be afraid and come to Ukraine. Hear thousands of similar stories about us, Ukrainians,” Zelensky stressed.

The first-ever Distinguished Leadership Award for an entire nation, the Ukrainian people, was handed over to Ambassador of Ukraine to the United States Oksana Markarova.

Photo: Office of the President of Ukraine