PUTIN PLANS TO CRUSH LIBERTY IN UKRAINE.
FREE WORLD MUST UNITE TO STOP HIM.

Russia has engaged in countless atrocities as part of Putin's legacy. ​The
free world cannot sit back and let him continue to beat the drums of war
.

Since Russia’s illegal invasion of Ukraine’s southeast flank in 2014, nearly 14,000 innocent Ukrainians have perished and more than a million have been displaced.

Now, the free world is watching with growing alarm as Russia amasses more than 100,000 well-armed soldiers at Ukraine’s border, awaiting the signal to unleash further bloodshed. What a terrible waste of human potential.

The Kremlin is preparing to sacrifice the lives of thousands of its own men and women for no other reason than to bolster the ego of its ruthless dictator, Vladimir Putin.

Having twice taken bites out of Ukraine’s territory, Putin is hungry for more. His callous and unyielding aggression – toward a nation that voted by 90% for its own independence from tyranny – must be halted.

The U.S. has an obligation to act

Let us recall that in 1990, when Iraqi strongman Saddam Hussein ordered his Republican Guard across the border into Kuwait, the United States led a United Nations-backed coalition to drive the invading troops back.

With Putin eager to embark on a similar course, President Joe Biden should seek such a coalition. When liberty falls under siege, the world has an obligation to act.

Russia has engaged in countless atrocities – this is part of Putin’s legacy of madness. The free world cannot sit back as he alone – isolated from the norms of decent behavior – beats the Russian drums of war. 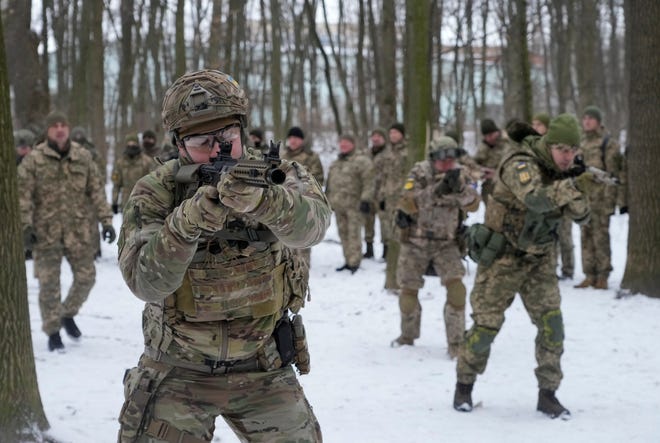 Harsh sanctions against the Russian oligarchy and the Nord Stream 2 pipeline project must be stiffened. The delivery of critical military weaponry to Ukraine must continue. But hasn’t enough blood already been shed on Ukrainian soil? The free world must demand an unequivocal cease-fire and quickly form the protective shield to ward off those who wish Ukraine harm.

Put an end to Putin's nightmare

In 1994, the United States and the United Kingdom signed the Budapest Memorandum  – assuring they would come to the aid of Ukraine in the event it was preyed upon. It is painfully clear the moment to make good on those assurances has arrived.

Ukraine is the scrimmage line for liberty on the European continent. If Russia is allowed to carry out its brutal schemes, the slaughter of countless innocents is inevitable. Let us slam the door on Putin’s wild nightmare.

It is time for the free world to rise up together. Let the United Nations and the Organization for Security and Cooperation in Europe rally the global coalition that is needed to defend Ukrainian sovereignty and independence, and preserve European stability for generations to come.