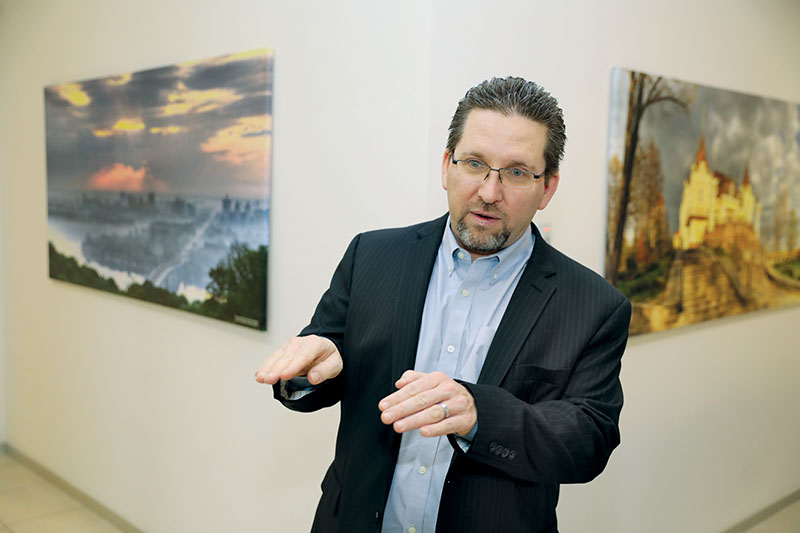 KAPITANIVKA, Ukraine – Petro Rondiak’s first car as a teenager in Massachusetts in the early 1980s was a rusty, smoke-belching, 10-year-old Peugeot hand-me-down from his Ukrainian immigrant parents.

Photo by VOLODYMYR PETROV
​Petro Rondiak, head of the management board of Winner Group Ukraine, speaks with the Kyiv Post on March 7 from the company’s headquarters and distribution center in Kapitanivka, 25 kilometers west of Kyiv (Volodymyr Petrov)

Now Rondiak, 51, is head of the management board of Winner Group Ukraine, which sold 6,064 vehicles last year and is prepping for expansion as Ukraine’s economy rebounds.

“We can deliver 20,000 cars a year,” Rondiak told the Kyiv Post during a March 7 interview at Winner’s massive headquarters, 25 kilometers west of Kyiv. “We could do even more. We bought an additional 11 hectares nearby and we’re ready to expand.”

Rondiak will not disclose details of the private company’s finances, but they’re looking better. “We’re making money again,” he said, after losing money as recently as 2014.

The company, started by owner and CEO John Hynansky, another Ukrainian-American, will celebrate its 25th year of doing business in Ukraine come November.

Rondiak, who has an educational background in engineering, met Hynansky through his contacts with the Ukrainian diaspora community in America. He moved to Ukraine to start working for Winner in 1995 and hasn’t looked back. He and his wife, artist Ola Rondiak, also a Ukrainian-American, have three children.

But Rondiak believes the good times are coming again to Ukraine.

He expects Winner to sell 7,324 cars this year. The sales will be mostly of Fords, but also Volvos, Jaguars, Land Rovers, Porsches and Bentleys. The Bentley Bentayga is the most expensive car on the lot, selling for $230,000. The plan is also to have 70 Winner franchise dealerships across Ukraine by 2018.

But the statistics and trends that really intrigue Rondiak are farther into the future and come with risk.

Car dealers key in on statistics showing that Ukraine has perhaps fewer cars per capita than any other European nation.

In 2016, Ukraine had only 2,195 new vehicles registered per 1 million people. While it represented a big jump over the previous year, Ukraine ranked behind 25 other European nations.

In the peak year, Ukraine had 650,000 new car registrations in 2008, before the global financial crisis hit. Last year, only 70,303 new vehicles were registered in Ukraine.

Low car ownership is a source of optimism for car dealers. “Even if we can get to half of Poland’s car ownership rate, we will have a drastically bigger car market,” Rondiak said. “When the wave comes back we want to be ideally positioned.”

But it is unlikely that Ukraine will ever catch up to the rest of Europe for several reasons, some of them good from an environmental and consumer standpoint.

Technology is changing the market. Electrical cars will be mass produced soon, Rondiak said. “The point of disruption is 200 miles of range (without recharging) and under $30,000 in price. When that happens, it goes mass market and it goes huge. At that range and at that price, the performance of these cars is going to be phenomenal.”

Moreover, Rondiak said, sharing cars will become more prevalent as the recognition sets in that people spend trillions of dollars on cars that get used only 10 percent of the time.

Additionally, large cities encourage greater use of bicycles and mass transit. Ukraine, as part of its Soviet legacy, already has a sophisticated mass transit network, although one that is starved for investment.

Further harming an aspirational car culture are poor roadways and other infrastructure impediments, such as the lack of parking spaces.

Rondiak, however, said he “is excited about the future” and sees no chance for car dealers to go out of business entirely. “The feeling of being behind the wheel of a car, controlling your own destiny for the day, will always be pervasive,” Rondiak said.

He got a glimpse of the future on a recent business trip in Finland, when the taxi driver taking him from the airport to his hotel put the car on automatic pilot. “He took his hands off the steering wheel for a big chunk of the trip,” he said. “It was my personal first experience with autonomous cars.”

Ukraine’s automotive market is idiosyncratic compared to the West. The lack of cheap, easy credit is a major stumbling block to sales. No reliable credit ratings on borrowers also blunt lending.

More than 90 percent of customers pay for vehicles in cash, even if the price is north of $30,000.

“We are not here to judge where somebody’s income is from,” Rondiak said. “Our job is to pay our taxes.” Rondiak estimates that Winner has paid $1 billion to the Ukrainian government in taxes during its 25-year existence.

Additionally, customers in Ukraine are at a handicap compared to, say, American buyers, where the precise value of a car – especially a used one – is known to buyers and sellers, most prominently through the Kelley Blue Book.

If sales data were published, Rondiak said that Ukraine would be able to develop a similar price guide. “Maybe it’s time for a used car auction where all results get published,” he said. “We could develop a ‘Winner Book.’”

Informed customers improve their odds of getting a good deal and have curtailed high-pressure sales tactics that used to make the car-buying experience miserable in America. In Ukraine, Rondiak said, “I don’t think being aggressive and being a high pressure person is a necessary characteristic for sales. We look for people who know how to build trust in the customers.”

Winner has its own in-house training center for technicians, sales managers and dealer personnel.

Winner employs people officially and spends noticeably on advertising and community ventures. It also gets involved in charitable giving, including the delivery of first-aid kits to soldiers in the east and the supply of incubators for premature babies.

The company frowns on debt and has “built up the company from our own earnings,” he said. It did, however, take out a $20 million loan from the U. S. Overseas Private Investment Corporation to build a Porsche dealership near Kyiv Boryspil International Airport.

He believes in targeted social media advertising campaigns and following up with customer surveys. He thinks TV advertising has lost its effectiveness and believes the main value in print advertising, including in the Kyiv Post, is promoting brand awareness. “We’re here. We’re open, transparent and patriotic. We’d love to do business with you for your automotive needs. That’s the point of that advertising,” he said.

The goal, Rondiak said, is to get customers thinking “I have a car need. I want to buy from Winner.”