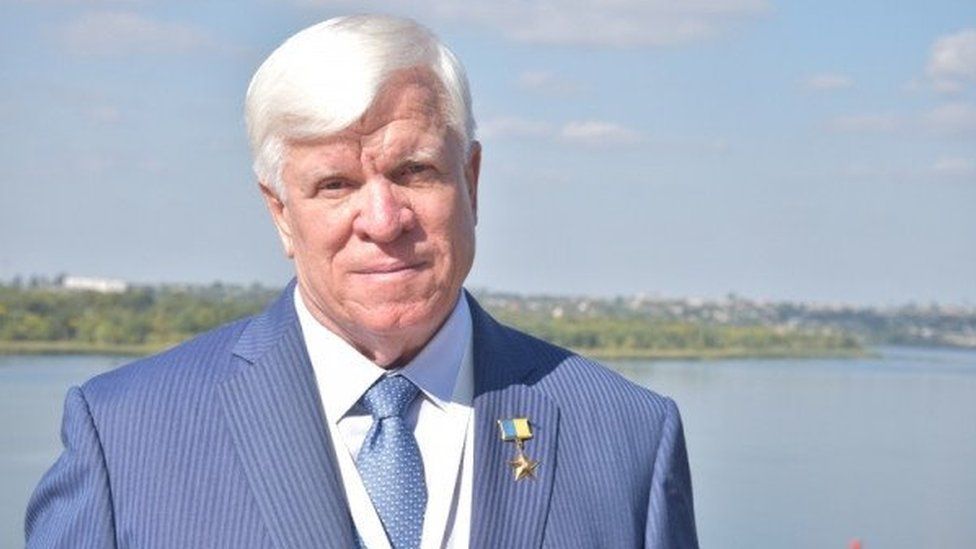 "The U.S.-Ukraine Business Council (USUBC) is deeply saddened by Russia's horrible murder of one of the true Heroes of Ukraine. Oleksiy Vadaturskyy devoted his life to the economic development of Ukraine's agricultural industry and feeding people in Ukraine and around the world.

"As a successful entrepreneur, creating Nibulon, one of Ukraine's largest agricultural enterprises and employers. Oleksiy Vadaturskyy saw his achievements first of all in serving Ukrainian society and his accomplishments go far beyond any earnings his business yielded. Vadaturskyy was planning to visit Turkey in a few days, regarding plans to re-start the export of grain from Ukraine.

Oleksiy Vadaturskyy is a true Hero of Ukraine. (Photo: Nibulon)

KYIV, Ukraine – Russia unleashed some of the worst barrages of the war on Ukraine’s southern port city of Mykolaiv on Sunday, killing among others the owner of one of the nation’s leading agricultural companies, as Moscow reported a drone attack on the headquarters of its Black Sea Fleet.

Mykolaiv, a strategic city that Russia tried but failed to seize in the first weeks of the war, has been repeatedly targeted by Russian Smerch and Uragan missiles and long-range artillery in recent weeks, with a strike using cluster munitions on Friday killing nine people at a busy bus stop.

One of the shells hit a Mykolaiv home of Oleksiy Vadaturskyi, the controlling shareholder and chief executive of the Nibulon LLC conglomerate, killing him and his wife, the regional administration said.

One of Ukraine’s biggest companies, Nibulon operates its own grains and oilseeds export port in Mykolaiv as well as grain-storage facilities across Ukraine with a capacity of 2.25 million tons, according to the company’s website. Mr. Vadaturskyi, 74, received in 2007 the country’s highest decoration, the Hero of Ukraine title, for his contribution to its development.

On Saturday night, Ukrainian President Volodymyr Zelensky urged all people living in Donbas to heed a government order to immediately evacuate. Ukraine controls roughly 40% of the Donetsk region, one of the two that make up Donbas, and four weeks ago lost its remaining foothold in the neighboring Luhansk region.

“The more people leave Donbas now, the fewer people the Russian army will have time to kill,” Mr. Zelensky said. “At this stage of the war, terror is the main weapon for Russia.” Hundreds of thousands of people, including tens of thousands of children, have remained in Ukrainian-controlled areas of Donbas, including in the major cities of Kramatorsk, Slovyansk and Bakhmut.

The Ukrainian government said earlier that, because of nonstop Russian attacks, it won’t be able to provide heating during the coming winter in these cities, and warned that anyone choosing to stay would have to sign a special waiver. Mr. Zelensky pledged full logistical support and financial assistance from the government for those who leave.

[THIS IS DE-NAZIFICATION IN ACTION SAID A RUSSIAN COMMENTATOR]

Mykhailo Podolyak, a senior Ukrainian presidential adviser, said that he believed Mr. Vadaturskyi was deliberately assassinated because of his role as one of southern Ukraine’s biggest employers.

“The precise hit of a missile not just in the building, but a particular wing—the bedroom—doesn’t leave doubt that it was a targeted strike,” he wrote on social media. “The Russian barbarians are carrying out a terror campaign, attempting to intimidate, destabilize and break the Ukrainian society.”

While Russia hasn’t officially commented on Mr. Vadaturskyi’s death, political commentators in the state-controlled media, including Margarita Simonyan, the chief of the Kremlin’s RT television network, exulted in the Ukrainian businessman’s death. “This is de-Nazification in action,” she wrote, echoing Moscow’s false claim that Ukraine is run by Nazis.

Mr. Zelensky lauded Mr. Vadaturskyi, who established the company the year Ukraine gained independence in 1991, for choosing to stay put in Mykolaiv as the city came under Russian attack—unlike many other oligarchs [not the correct word to describe Vadaturskyi, leading businessman], who sought safety abroad.

Mr. Zelensky’s appeal for Donbas residents to leave, made during a regular televised address, came as Kyiv called for Russia to be designated a state sponsor of terrorism and continued to push for an international investigation into the killing of scores of Ukrainian prisoners of war in an explosion Thursday night at the Olenivka detention facility in the Russian-occupied part of Donbas.

Moscow has accused Ukraine of targeting the facility with Western-made weapons. Kyiv said that the prisoners, most of them members of the Azov battalion captured in Mariupol in May, were deliberately executed in the explosion after having been tortured.

The International Committee of the Red Cross, which helped negotiate Azov’s surrender in besieged Mariupol, said Saturday night that Russia denied its request to visit the Ukrainian prisoners of war from the Olenivka facility. “Granting ICRC access to POWs is an obligation of parties to conflict under the Geneva Conventions,” it said.

Mr. Podolyak, the Ukrainian presidential adviser, said Sunday that the analysis of satellite images of the Olenivka facility showed that the barrack housing Azov prisoners of war was hit by a thermobaric explosion from the inside, rather than a strike from the outside. The satellite images from Maxar Technologies showed that only one building among more than 20 on the large compound was hit, with parts of the roof missing. Prisoners were transferred to that building right before the attack, Mr. Podolyak said.

In Sevastopol in the Crimean Peninsula, which Russia seized from Ukraine and annexed in 2014, an attack by a small drone on the headquarters of the Russian Black Sea Fleet injured six officers and caused minor damage, according to Russian state news agency Tass.

The local governor, Mikhail Razvozhaev, accused Ukraine of carrying out the attack and urged city residents to stay home. Celebrations of Russia’s Navy Day on Sunday were canceled in Sevastopol. The kind of drone used in the attack could only have been flown from the immediate vicinity of the city, which is located some 150 miles from the nearest Ukrainian-held territory.

While Ukraine has repeatedly used drones since the Feb. 24 Russian invasion to target military and logistics infrastructure facilities in Russia, Ukrainian officials Sunday denied involvement in the Sevastopol attack. Serhiy Bratchuk, spokesman for the Odessa military administration, said that the strike in Sevastopol was a Russian provocation. “The liberation of our Crimea from the occupiers won’t happen this way and will be much more efficient,” he said. “Everything in its proper time.”

Ukraine’s navy said in a statement that Russia manufactured the drone-strike incident as a pretext to cancel the Navy Day parade because it was afraid of its ships being targeted by Ukraine during the celebration.

Russian President Vladimir Putin on Sunday pledged that Russia’s navy would soon receive Tsirkon hypersonic cruise missiles, an antiship weapon capable of reaching speeds of up to Mach 9 according to Russian authorities. Delivery of the missiles will start in the coming months, with the frigate Admiral Gorshkov the first to get them, Mr. Putin said during a speech in St. Petersburg marking Navy Day.

Mr. Putin on Sunday also approved a new Russian naval doctrine, a document that calls for the preservation and maintenance of a naval presence in the Persian Gulf through the building of “logistical support points” in the Red Sea and the Indian Ocean, while using the infrastructure of countries of the region.

Mauro Orru and Ann M. Simmons contributed to this article.

More on Oleksiy Vadaturskyy’s horrible murder by the Russian military: