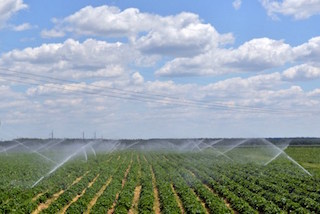 All is not gloomy in Ukraine’s economy. Among other sectors, including information technology, agriculture — driven by Ukraine’s fertile soil and attractive climate — is one sector that looks set for nothing but growth in the future.

At the New Ukraine Investment Conference in Parkovy Center in Kyiv on May 17, agricultural experts talked about the sector, including the role of organic food.

Mykola Kovalski, director of marketing and communications of Astarta-Kyiv, delivered a short presentation on how his business is responding to challenges. He emphasized the need for corporate responsibility and transparency, noting that although “maybe sometimes big companies are depicted as evil, companies like ours put a lot of money into local communities and local infrastructure.”

John Shmorhun, president of AgroGeneration, which exports to many nations, said that despite political turmoil, his company has made a turnaround in recent years. He credited this success partly to corporate restructuring in France. He said there is enormous opportunity in agriculture in Ukraine, noting that even in a time of declining crop prices, companies can still turn a strong profit. “I think the good news is that agriculture is really a crisis buster for Ukraine.”

He noted that the market for food grown with non-genetically modified organisms, or GMOs, is growing and that Ukraine, as a non-GMO country, is in a position to capitalize on this trend.

Finally, he said that food security will become an increasingly important issue and predicted that within the next decade Ukraine will become the largest grain exporter in the world—overtaking even the United States — although he did stress that the country needs to improve its logistical capacity for storage and transit of food products in order to achieve this rather ambitious goal.

Claude Exbrayat, founder and CEO of BUILOGIK.UA, a logistics and distribution center for organic products, is confident the organic sector will grow markedly and thinks Ukraine should strive to become an “organic paradise.” He noted that the organic sector remains underdeveloped and domestic consumers are skeptical about the reputation of organic producers but said his company is working to improve the situation.

Taras Vysotskyi, general director of the Ukrainian Agribusiness Club, stressed the need for the creation of an agricultural land market — to allow buying and selling — in order to increase production volumes outside of niche areas. Asked if he expects some land reform this year, he replied, “Of course, yes. If we don’t make these reforms this year, there will be nothing to talk about.”