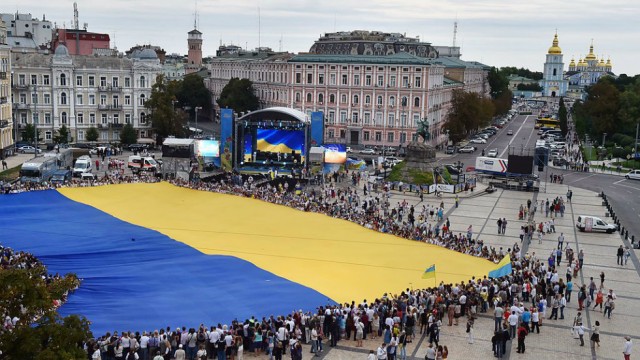 The stability and strength of any democratic society depends on the health of its economy and the robustness of its civil society institutions. When economic underpinnings degrade, and citizens become apathetic, struggling democracies can quickly become failed states.

That’s why the United States has a real interest in preserving the economic viability of nations important to our national security that are striving to become prosperous democracies. We can do this by leveraging the combined efforts of government, business and civil society to support, guide, and reinforce their economic engines.

While the US has a distinct part to play, it is not all up to us. The nations we assist must want this transformation at least as much as we do. While we can help plant the seeds, the local government, private sector and civil society play major roles in tending and cultivating the engines of growth.

Let’s look at Ukraine, a new democracy of great geostrategic importance to the U.S., which is striving to be part of Europe. Ukraine still grapples with significant challenges, including a decades-long effort to reshape its post-communist governance and economic infrastructure.

Here are two possible Ukraine futures: the first is an economically weak country that tempts Russia to repeat its Crimean exercise, or the second as a prosperous Ukraine whose strong ties to the markets and nations of the world make it a more problematic target. The second looks more likely, though in today’s world, nothing is guaranteed.

This transformation is due in large measure to the fact that Ukraine now has a vibrant civil society — one that has served as the main driver of positive reforms that began three years ago with the Euromaidan Revolution (also known as the Revolution of Dignity), a movement that emphasized the importance of human dignity and responsible citizenship.

Since that widespread call to end government corruption and human rights abuses, senior levels of the Ukrainian government now pay attention to the input of civil society as it moves to implement reforms and build a Ukrainian governance and economic infrastructure compatible with Europe and the West.

Citizens and nongovernmental organizations (NGOs) have taken up the role of advisers and activists. The emergence of NGOs such as the Reanimation Package of Reforms, a coalition of leading NGOs from all over Ukraine who work on implementing reforms, along with the Anti-Corruption Action Center and the Institute of World Policy are all citizen initiatives that work on fostering civic activism and bolstering reforms.

U.S. assistance has played a role in this transformation. We can build on our performance by helping Ukraine move ahead faster and better with key reforms advocated by civil society, private businesses, and NGOs. Our support for macroeconomic assistance must be firmly conditioned on effective implementation of these reforms.

These organizations, through their work to improve the livelihoods of Ukrainians, can identify real challenges on the ground that can be brought to the government to be addressed through official reforms.

This year marks 25 years of U.S.-Ukraine diplomatic relations and so many initiatives begun a quarter of century ago are now beginning to bear fruit. As Ukraine starts to let go of its Soviet past, a young, vibrant generation attempts to position its country as an emerging democratic, economically viable state in the European community of nations.

And, since 1992, Ukrainians have had the opportunity to participate in U.S. government programs, such as Fulbright academic exchanges, More than 1,000 Ukrainian students and scholars have done substantive research in the United States and have come back to Ukraine to implement best practices.

Such organizations as the U.S. Chamber of Commerce, which also celebrated 25 years of work in Ukraine last week have been instrumental in promoting reforms in Ukraine, the U.S.-Ukraine Business Council serves as a platform for forging relations between western companies and Ukrainian businesses. The West-NIS Enterprise Fund continues to promote reforms in Ukraine and has a number of programs that support the new generation.

Ukraine must deliver on the reforms inspired by the Euromaidan Revolution before the Ukrainian people give up hope. The United States can now support the reformers in the Ukrainian government as well as in civil society and forward-looking private companies who work to improve the lives and economic well-being of ordinary Ukrainian citizens. We have a historic opportunity to support local initiatives, and work with partners to help these reformers realize Ukraine’s full potential.

It is in their interest — and ours.

Marta Kolomayets is the Ukraine country director for the Institute of International Education, which administers the Fulbright Scholar Programin Ukraine. She is a U.S. citizen who has lived in Ukraine since 1991 and seen the growing pains of a country trying to shed its Soviet past and emerge as a strong democracy in Europe, a work that is still in progress.

Greg Huger is a senior associate in the U.S. Leadership in Development Program at the Center for Strategic and International Studies. He has served in senior USAID leadership positions in Ukraine, Pakistan, Afghanistan, Egypt, and El Salvador.