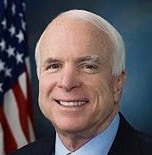 Robert Homans is a member of the U.S.-Ukraine Business Council (USUBC), www.USUBC.org. He is a financial expert and consultant who has lived in Ukraine several years

Unlike most of my other emails, on this email there is only 1 subject.   That subject is Sen. John McCain, what he meant to Ukraine, and some of the reasons why he became such a strong advocate for Ukraine.

I had the good fortune of meeting Sen. John McCain once, in March 2014 when and I and my wife and stepdaughter, both Ukrainians, were invited to a dinner in Kyiv with Sen. McCain and other member of his delegation of US Senators.  Other than the Senators, members of their staffs, and 1 or 2 people from the US Embassy in Kyiv, we were the only guests.

It was approximately 3 weeks after former President Yanukovich fled Kyiv, approximately 2 weeks after the Russian Federation invaded Crimea, and almost the same day as Russia orchestrated the sham referendum in Crimea, under which Russia attempted to legitimize its annexation of the territory of a neighboring country.

The dinner was held at a Ukrainian restaurant called O Panas.   O Panas is located in Shevchenko Park in Kyiv.   I understand that Sen. McCain either suggested, or approved of, all the restaurants his delegations attended on their trips.    Sen. McCain and his delegation had arrived in Kyiv only that morning, and they had a full day of meetings including a visit to Independence Square.   They must have been very tired, but they all came.

Sen. McCain was very gracious to all of us, especially my stepdaughter aged 25.   As I mentioned in an email I sent out over 4 years ago, soon after the dinner, my stepdaughter said that she wasn’t going to wash her right hand for a week, having used it to shake hands with Sen. McCain.

Everyone who gets these emails knows that Sen. McCain was a great friend of Ukraine.  These are some observations of what Sen. McCain brought to Ukraine and why he will be missed, and some events in his life that must have influenced how he approached what had just taken place in Ukraine only a few weeks before this visit.

Sen. McCain brought the force of his own personality and his strong moral clarity in support of Ukraine.    The fact that Ukraine now enjoys bipartisan support in the US Congress is largely the result of Sen. McCain’s willingness to include, in his delegations, Senators from across the US political spectrum.   The delegation that we met included 4 Democrats, Sens. Whitehouse (D-RI), Durbin (D-IL), Murphy (D-CT), and Heitkamp (D-ND).

At dinner, I sat between Sens. Whitehouse and Durbin.    It was Sen. Whitehouse’s first trip to Ukraine.   Sen. Heitkamp was not at the dinner.   Instead, she was meeting with companies from North Dakota who were exporting agricultural equipment to Ukraine.   Later, on his last visit to Ukraine in December 2016, McCain spent New Year’s Eve in Mariupol, near the front lines of the war with Russia, with Ukrainian soldiers.   Sen. Amy Klobuchar (D-MN), among others, was on that trip.

Sen. McCain extended his support to Ukraine at a time when many in the United States, at very influential levels, ascribed to the narrative put forward by Russia and several influential policymakers in the US and Europe, that The Revolution of Dignity was a “Fascist Coup,” and it was wrong for the United States to be seen as supporting the overthrow of a legitimately elected Head of State.   Russia had spent a lot of money on contributing to several influential think tanks in Washington, and several well-known commentators in the West took up Russia’s narrative.

Sen. McCain ignored these claims, and instead saw the Revolution of Dignity for what it was, Ukrainians wanting a country that is democratic with the primacy of the Rule of Law.  Because of who Sen. McCain was, and his efforts to bring Members of Congress from both ends of the political spectrum to Ukraine to see for themselves, he was able to bring others to the same conclusion that he had come to.

Unlike others, who saw Vladimir Putin as a Russian nationalist, protective of Russia’s legitimate interests and who therefore excused Putin’s behavior, Sen, McCain harbored no illusions about who Vladimir Putin really is.   In February 2007, Pres. Putin gave a very significant speech at the annual Munich Security Conference, an event Sen. McCain attended every year, where Putin, in effect, laid down a marker that strongly implied that Ukraine, and the other former Soviet Republics, were part of Russia’s sphere of influence, and any of these countries joining NATO would be unacceptable to Russia.

It would have been easy for Sen. McCain to accept Putin’s remarks, that the West should back away from supporting the democratic aspirations of Ukraine, the Baltics, Moldova, and Georgia, and instead let them fall back under Russian influence, but he never did, not even for a second.

There were a couple of events in Sen. McCain’s life, not widely reported that, for me, illustrates his ability to take significant personal risks and have the courage to take views that might be inconsistent with the mainstream.   Both of these events, in addition to events that are more publicized such as the 5 ½ years he spent as a guest of North Vietnam, can explain the clarity and force of personality that he willingly applied on behalf of Ukraine.

Sen. McCain is widely quoted that while in the Navy he “Served in the company of heroes, but he was not a hero himself.”   Most people think he was referring to his fellow prisoners in North Vietnam.   In addition to his fellow prisoners, I believe he was also referring to the men he was serving with in the USS Forrestal when, on July 29, 1967, a catastrophic flight deck fire nearly resulted in the loss of the ship.

LCDR McCain was sitting in his A-4 Skyhawk, getting ready to be launched off the Forrestal for a strike against N. Vietnam, when a Zuni missile was accidentally launched from another plane and hit one of the external fuel tanks on McCain’s plane.   Instead of climbing out of his aircraft and seeking cover, LCDR McCain jumped out of his plane, took up a fire hose and helped fire parties try to fight the fires, in the midst of burning gasoline and exploding ordinance.

There were many instances of heroism on that day, including sailors throwing smoking 500 lb. bombs over the side, and securing below-decks magazines that, had they gone off, might well have resulted in the loss of the ship.    When the fire was brought under control, 134 sailors were dead and another 161 were injured.   Soon after, LCDR McCain arranged for a transfer to the carrier Oriskany where, on October 26, 1967, he took off for another bombing mission over Hanoi that ended in him being shot down and taken prisoner.

Countless people, including McCain himself, his family, his constituents in Arizona, the American People, the Ukrainian People, and any number of victims and potential victims of human rights violations, who may now get some measure of protection from the Magnitsky Acts, including the Global Magnitsky Act that Sen. McCain was instrumental in getting passed, all of whom should be thankful that the warhead of that Zuni missile didn’t go off.  If it had, LCDR McCain would almost certainly have been killed, along with many more Forrestal sailors.

Sen. McCain’s ability to take risks, sometimes un-necessary risks, and get away with it, seems to have started relatively early in his career.  It has been widely reported that Midshipman McCain finished his 4 years at the US Naval Academy ranked 5th from the bottom of his Class.   What hasn’t been widely reported how risky that was, not just to him personally but more so given his family’s history.

There is a tradition at the Naval Academy that the lowest ranking member of a graduating class to actually graduate would be called the “Anchor Man.”   By tradition, on Graduation Day the Anchor Man gets $1.00 from every other Member of the Class.   Back when McCain graduated that was serious money, equal to several months’ salary of an Ensign (the US Navy’s version of a 2nd Lieutenant).

I was a Navy Officer myself, and one of my fellow officers on the destroyer I served in was an “Anchor Man.”   As mentioned, the Anchor Man was the lowest ranking member of his Class, to graduate.   If you didn’t graduate, you owed the US Government 4 years, as an enlisted man.

According to my shipmate, the bottom 5 or 10 Midshipmen entering their final year would actually compete to be the “Anchor Man,” with the risk being not graduating and becoming an enlisted man.   Midshipman McCain must have been among those in the running, even at the risk of becoming an enlisted man and bringing some embarrassment to his family that, at the time, included a retired Admiral and his Father, a serving Admiral.

It is experiences like these, along with his time as a POW and many others, that produced someone with the clarity to see the Revolution of Dignity for what it really was, and to see Vladimir Putin for what he really is.   Perhaps there is one thing that Ukraine can do, in the memory of Sen. John McCain and what he did for Ukraine – pass the Ukraine Magnitsky Act.   It is currently under consideration in the Ukrainian Parliament.

NOTE:  Robert Homans is a member of the U.S.-Ukraine Business Council (USUBC), www.USUBC.org. He is a financial expert and consultant who has lived in Ukraine several years.  He is a strong advocate of Ukraine's independence, territorial integrity, democracy, and Ukraine's opportunity for economic growth.  Homans publishes his personal commentary newsletter normally twice a month.  The personal commentary by Robert Homans is distributed for information purposes only.  The views. opinions and statements expressed are the views and opinions expressed of the author and do not necessarily reflect the official policy or position of  USUBC or its members.