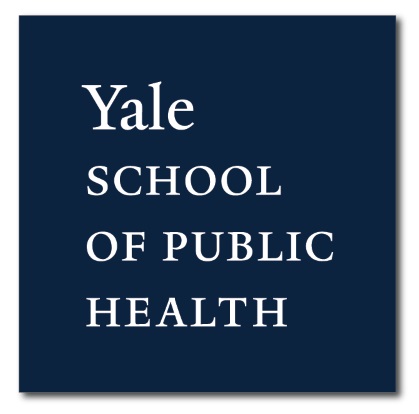 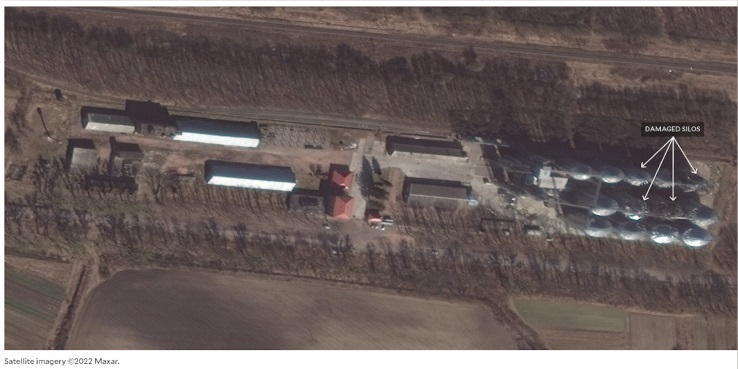 Damaged silo complex:
Porttransbud (Ovruch Branch Rise) in Zhytomyr Oblast. There are dark markings on the tops of at least six of the facility’s silos, with the greatest apparent damage to the silo in the second row, second from the right/east. Visible damage sustained by silos as of 2022-02-27.
Photo by Image © 2022, Maxar Technologies.

Damaged small-scale grain storage operation:
Safety SFH in Donetsk Oblast on 2022-08-01. Extensive damage is observable throughout the facility and nearby houses. Impact cratering can be seen in an around the facility.
Photo by Image © 2022, Maxar Technologies.

One of every six (15.73%) Ukrainian crop storage facilities, such as grain silos and elevators, has been damaged, destroyed, or controlled by Russia and its aligned forces since its invasion began on February 24, according to a new report released today by the Yale School of Public Health’s (YSPH) Humanitarian Research Lab(HRL), in collaboration with the U.S. Department of Energy’s Oak Ridge National Laboratory (ORNL).

This represents approximately 14.57% of Ukraine’s total crop storage capacity in tonnage. Analysts identified at least 75 destroyed or damaged storage facilities among the 344 locations visible in satellite imagery collected after Russia’s invasion began. The analysis was undertaken as part of the Conflict Observatory program, which is funded through the U.S. Department of State.

“Russia’s destruction and occupation of Ukraine’s crop storage capacity may deepen an unfolding food security catastrophe for some of the world’s most vulnerable people,” stated Kaveh Khoshnood, associate professor of epidemiology at YSPH and faculty director of the HRL.

“If Ukraine’s farmers don’t have adequate storage, there is a high chance that they may not plant winter wheat and other upcoming crops, which will reduce the available supply of grain for years to come.”

Ukraine had an estimated 58 million metric tons of crop storage capacity available across more than 1,300 storage facilities before the war started. According to the study, at least 3 million tons have been damaged during the war and more than 6 million tons of storage were controlled by Russia and its aligned forces (including 820,000 damaged tons) as of July 2022.

“Russia’s destruction and occupation of Ukraine’s crop storage capacity may deepen an unfolding food security catastrophe for some of the world’s most vulnerable people.”

“Whether indiscriminate or intentional, targeting of crops and crop storage infrastructure can constitute a war crime and a crime against humanity in some cases,” said Nathaniel A. Raymond, executive director of the HRL.

“This report is overwhelming evidence that Ukraine’s farms, silos, grain bins, and elevators have been hit over and over with artillery shells, bombs, and missiles since Russia first attacked Ukraine more than six months ago.”

The current study employed a unique methodology to complete the analysis. An area of interest comprising the nearly 700 storage facilities currently in Ukraine’s control and most likely affected by conflict from ground forces was identified.

Nearly 350 of those locations were imaged (within the past approximately two months) and compared to archival satellite imagery of the location from before the war.

A dataset of these facilities’ locations was provided to the analysts from a 2019 Ukrainian website known as the “Elevatorist” which contains certified crop facilities locations and was taken offline when Russia attacked.

Analysts with the Oak Ridge National Laboratory, in collaboration with HRL, created a custom-built object detection machine learning model that identified facilities not included in the Elevatorist dataset.

UT-Battelle manages ORNL for the Department of Energy’s Office of Science, the single largest supporter of basic research in the physical sciences in the United States. The Office of Science is working to address some of the most pressing challenges of our time. For more information, please visit energy.gov/science.

Submitted by Colin Poitras on September 15, 2022

Featured in this article:

NOTE: Thanks to Yale Graduate George Chopivsky, a long-time supporter and member of USUBC for sending this article.