Ukraine receives agreement for appointment of Markarova as Ukraine's ambassador to U.S. 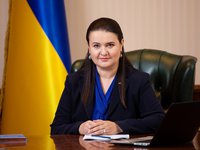 Ukraine has received an agrement for the appointment of ex-Minister of Finance of Ukraine Oksana Markarova as Ukraine's ambassador to the United States, said Deputy Foreign Minister of Ukraine Yevhen Enin.

"The Ukrainian side has already received an agrement for the appointment of Oksana Markarova as Ukraine's ambassador to the United States, at the same time the final decision will be made by the President of Ukraine," Enin said in an exclusive interview with Interfax-Ukraine.

The Deputy Minister stressed that the United States is Ukraine's key partner in ensuring security, supporting the territorial integrity and independence of Ukraine, this country is a key contributor to the provision of military assistance to Ukraine.

"We are extremely proud of the fact of the bipartisan support of Ukraine from the U.S. side," he added.

Enin also expressed gratitude to the republican administration for a significant increase in financial assistance to meet Ukraine's security needs, the actual start of deliveries of lethal weapons to Ukraine to contain Russian aggression.

"At the same time, we hope that with the new administration we will be able to strengthen the level of existing support and the content of our dialogue on security issues and, of course, restore the territorial integrity and inviolability of our state," the Deputy Foreign Minister noted.

He stressed that Ukraine is actively working to ensure that full-format contacts between the leadership of the Ukrainian and American states take place as soon as possible.

"We are held back in a certain way by the epidemic situation, there are certain bureaucratic procedures that must be properly completed. The signals we receive indicate that Ukraine will be one of the priorities of the United States, and this, in our opinion, will greatly contribute to the acceleration of the beginning of substantive contacts with the new administration. We look forward to the arrival of the new American ambassador to Ukraine, and we are confident that he will have an extremely high credit of confidence in the new U.S. administration," he added.

Answering the question of how Ukraine's relations with the new U.S. leadership will be affected by the fact that the U.S. Department of Justice, as part of the investigation of the financial activities of Hunter Biden, requested information regarding, among other things, his work in the Ukrainian company Burisma, Enin said that this issue can in no way harm the Ukrainian-U.S. cooperation.

"There is an interstate agreement on mutual legal assistance in criminal matters between Ukraine and the United States. The document defines the central competent authorities. On the American side, this is the Department of Justice, on the Ukrainian side, this is the Prosecutor General's Office. In case of requests, appropriate legal assistance can be provided. We view this issue as such that it cannot harm the Ukrainian-American cooperation in any way, it has a certain relation to the internal political situation in the United States," he explained.

Enin said that Ukraine does not interfere in the internal affairs of any foreign state, in particular the United States.

"I will separately note that we do not interfere in any way in the internal affairs of any foreign state, in particular the United States. Moreover, despite repeated attempts by third parties and their representatives in Ukraine, our state, domestic diplomacy managed to maintain this balance and prevent a split in the camp of those players who actively support Ukraine in the United States," the deputy minister said.