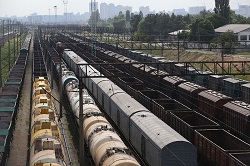 Ukraine’s current state of infrastructure does not answer all the needs of modern business.

In fact, in some areas the cargo shipping capacity have declined since Soviet times, namely, river cargo transport.

Only one private company, Nibulon, is continuously working on improvements of river transport by constructing a fleet of barges and tugboats fleet for own needs as well as to transport cargo from other entities.

The state-owned railways and the mostly private trucking industry do not have sufficient capacity for delivering cargos from producers/manufacturers to the ports because of years of theft in the railways and the lack of investment by Ukrzaliznitsya.

Certain officials use Ukrzaliznitsya as a means to extort bribes for preferential access to railroad cars for shippers, rather than allowing private companies to own railroad cars and locomotives to compensate for the inadequate supply by Ukrzaliznytsja.

Restrictions on per axle load for railroad cars and trucks are outdated. This doesn’t happen in the United States, even though the loads are higher, perhaps because the quality of the roads is better.

Port infrastructure is improving because of private investment. State agencies responsible for approvals for dredging, construction etc., are moving slowly.

In fact, if this year’s crop is higher than in previous years, even more serious bottlenecks are expected in the ports when it comes to agricultural commodity exports.

The port, canal and other fees and levies are higher in some cases than anywhere in the world, which makes Ukraine less competitive, yet funds going into the state coffers are not distributed equitably when it comes to improving the infrastructure (e. g. excise tax collected from fuel for tugboats and barges goes to fix the roads, not the river infrastructure; port fees from all ports are used mostly in some, but not others, thus putting some ports at a disadvantage).

Airports are not up to the standards which would allow the international operators to invest into them and derive a reasonable income.

The postal service, while showing some improvement, is still not up to the challenge. Naturally, we all understand that business always wants the best conditions for operating, but the state is not moving as fast as business wants or as the state says it moves.

The largest surprise and bewilderment for the international business community, when it comes to Ukraine’s infrastructure, is the desire of Ukraine’s executive and legislative branches to keep the old system going as long as possible, perhaps for their own private benefit, with the reforms being nominal and not systemic.

The state’s desire to keep state-owned enterprises that drain the state budget and compete with private business rather than allowing private businesses do it in the most cost-efficient and timely way is best illustrated by the monopoly of Ukrzaliznitsya on locomotive ownership and traffic. Its leaders seem to think that allowing private ownership of just railroad cars will make the transport system much better.

The prevalence of the lingering bias in favor of state-owned firms is also illustrated by the various reincarnations of the Bread of Ukraine Corporation and state-run corporation, which intends to sell equipment to farmers and others.

At the same time, accusations of trying to monopolize the Dnipro River fly toward companies who are dredging the river to allow all, not just their, fleets to navigate and transport cargo and passengers.

The infrastructure system does not have sufficient resources, but the state does not seem to want the private entities to complement what the state can’t provide to the shippers.

The immediate result is decreased export revenue, and the longer term result is the stifling of the economy and lost opportunities for further investments from the companies already in Ukraine and those who would come if they understand a clear signal that they are wanted in Ukraine.

Michael Datsenko is director of information and member programs for the U.S.-Ukraine Business Council.