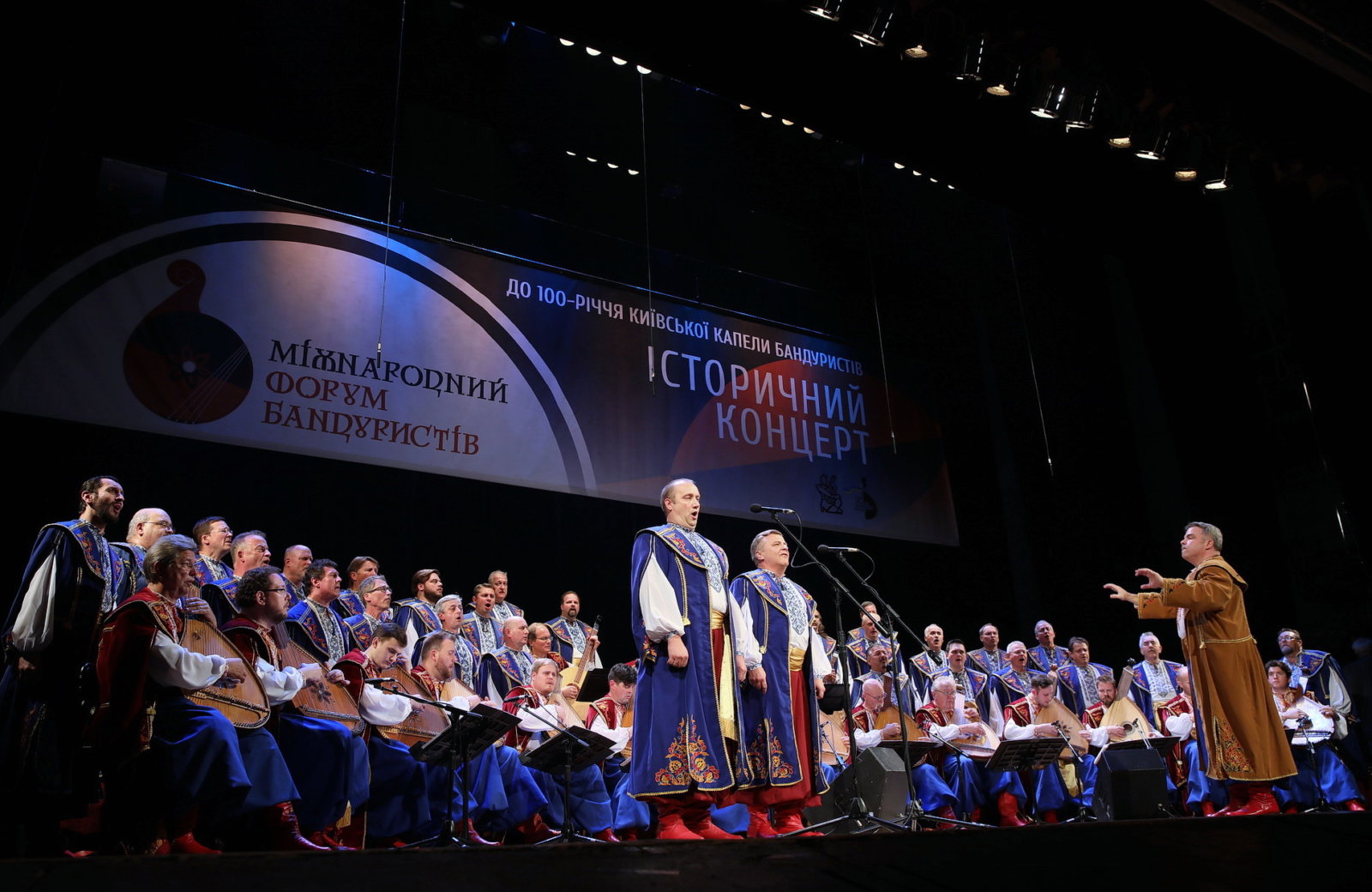 However, for the 56 American and Canadian citizens who form the Ukrainian Bandurist Chorus of North America, maintaining traditional Ukrainian music is neither a job nor a hobby, it is a lifestyle.

After 17 years of no performances in Ukraine, the 52 members of all-male Ukrainian Bandurist Chorus of North America have finally returned to mark the 100th anniversary of the chorus`s creation, as well as to talk about the importance of saving banduras.

Anatoli Murha, 40, the president of Ukrainian Bandurist Chorus of North America, says that even though the chorus has been around for 100 years, the ensemble`s members have been able to find a way to keep the traditions alive in promoting the instrument.

To watch a short video of the concert, please follow the link: https://www.youtube.com/watch?v=Jr5dr5uzT6U

“We try to give the message that the bandura is a voice of Ukraine, it is an ambassador of Ukraine, and is so remarkable for the country,” Murha says.

After the two performances that were held on Oct. 22–23 in Kyiv, the chorus`s members will continue traveling all over Ukraine until Oct. 29, making shows in five Ukrainian cities, including Lviv, Lutsk, Rivne and Chernihiv.

The chorus was initially founded in 1918 in Kyiv, and had 15 members striving to save Ukrainian identity and culture with their music.

However, even despite the popularity among Ukrainian people, the chorus was banned and repressed for many years, especially during the Soviet Union and World War II, until 1949, when some of its members emigrated to the U.S. and reestablished the ensemble in Detroit, Michigan. 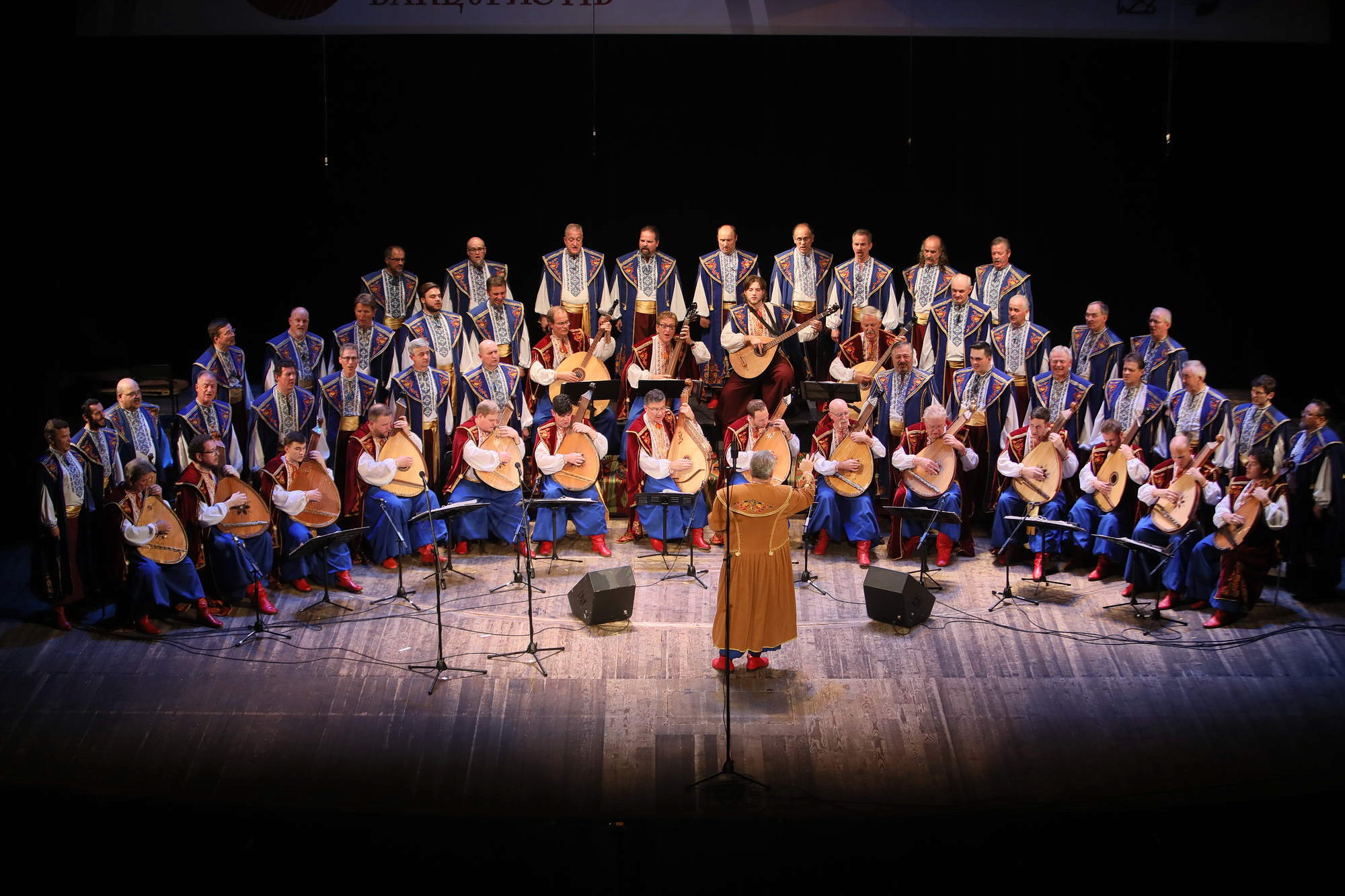 Oleh Mahlay, 49, the conductor of the Ukrainian Bandurist Chorus of North America, says the bandura itself has been repressed for many years.

“It was a repressed instrument, even though musical instruments usually do not get repressed. Because the repertoire is such that it promotes the culture, maintains the history, passes on all that information,” Mahlay says.

Nowadays, the chorus operates on a volunteer basis, with its 56 current members, who besides the chorus work as engineers, business owners, lawyers, doctors and get together nearly 4-6 times a year in order to spend their weekends rehearsing the new programs. All of the chorus`s members have Ukrainian roots.

Ukrainian Bandurist Chorus of North America performs concerts up to eight times a year, mainly in the northern parts of the United States, as well as arranges Kobzarska Sich in Pennsylvania, a summer educational program for bandurists from all over U.S.

The repertoire of the ensemble varies from traditional Ukrainian songs, religious and humorous folk songs, to classical ballads and English songs such as Irving Berlin`s “God Bless America.”

“We perform mostly for Ukrainian-Americans or Ukrainian-Canadian audiences, but at the same time, we have a major effort to attract new audiences,” Murha says.

Even though the sounding of bandura might be unusual for many people from the U.S., Murha says Americans and Canadians visit their concerts, and they are intrigued with the sound of the bandura.

“When people first see the bandura, the first question they ask is how many strings it has,” Murha laughs. (This group plays banduras with 60 strings, but the number varies.)

Despite performances and tours, the members of Ukrainian Bandurist Chorus of North America try to support musicians who play bandura in the U.S. as well as in Ukraine, and have a goal to establish an international bandura exchange between these two countries.

“We want to be able to send not just our musicians individually, but also students from North America and from other ensembles that study bandura, and send them to Ukraine, so that they can meet other musicians here,” Murha says.

“On the other hand we want to establish a fund in U.S. so that we can actually bring bandura players from Ukraine to North America. That is the major goal of our current tour,” he says. 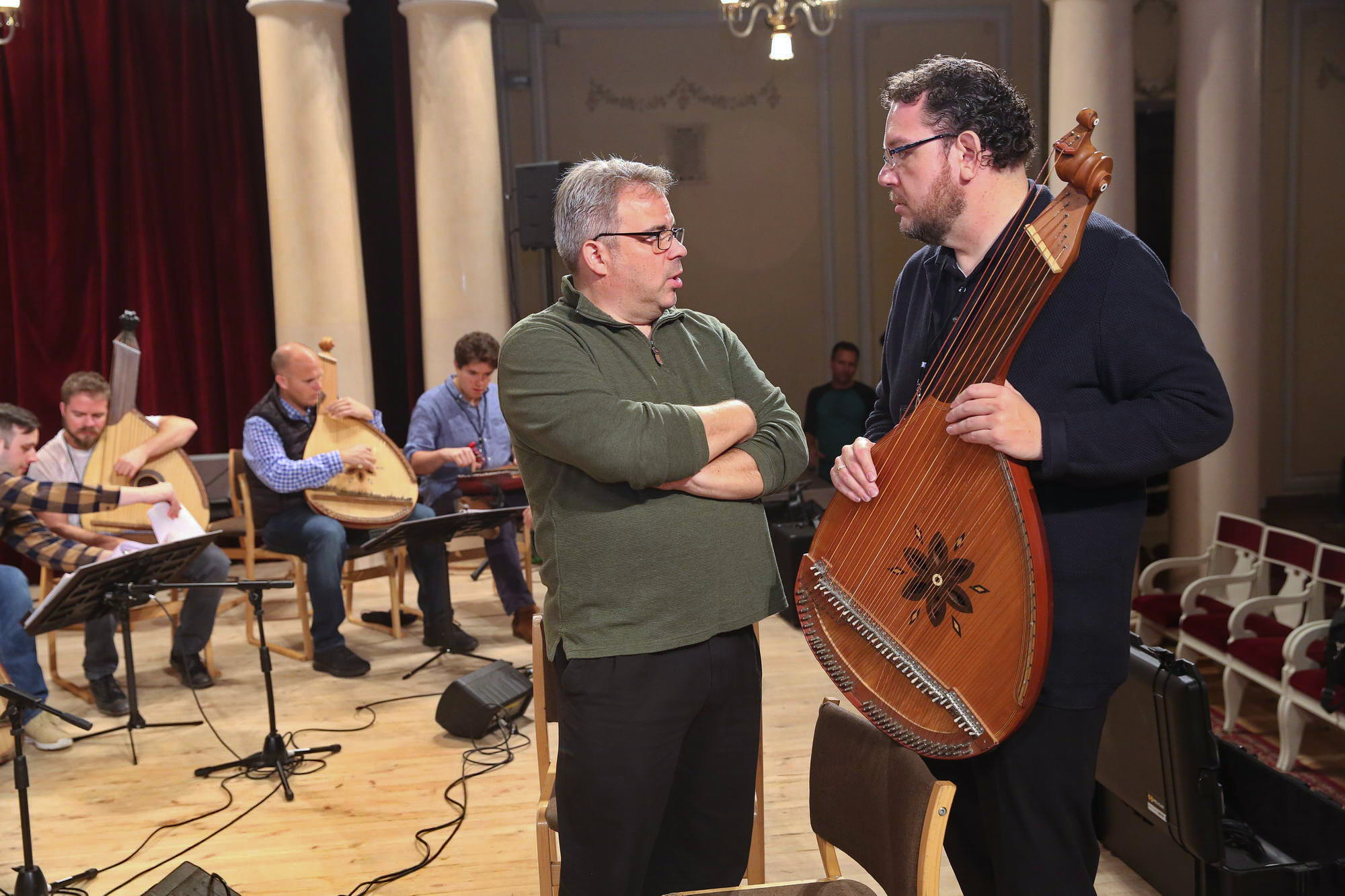 Oleh Mahlay, the conductor of Ukrainian Bandurist Chorus of North America (L), talks to Anatoli Murha, the president of the chorus, before their performance at the National Philharmonic of Ukraine in Kyiv on Oct. 23, 2018. (Kostyantyn Chernichkin)

In order to support the chorus and its activities and to tell the story of its oldest members, Canadian re-recording mixer of Ukrainian origin Orest Sushko, has produced and directed a movie “The Music of Survival: The Story of the Ukrainian Bandurist Chorus”, released in 2015.

The director has been working on a movie for 10 years, recreating the geographical path of the musicians’ early steps.
Sushko envisioned it as a diaspora story, and created a movie that speaks to the different immigrant experiences and various families in the U.S.

“‘The Music of Survival’ reflects the idea that they (bandurists) basically survived the oppression and a subjugation of two totalitarian regimes and were not crushed by that,” Sushko says.

Even though the repertoire presented by the Bandurist Chorus of North America is not modern, and for some people it might seem a little bit outdated, the chorus`s members disagree, stating that such music is needed and is very contemporary.

“Even though some people may think that our music is authentic and outdated — it is topical,” Mahlay says.

“First concert of the chorus was on Nov. 3, 1918. Nowadays, 100 years later we are here to mark it as Ukraine again is in war. Ukraine is also searching for itself, how to govern itself, how to deal with the war, and maybe most importantly how to deal with itself,” Mahlay explains. “And the bandura is a window to Ukraine from the outside world.”

Murha is sure that music tells a story of Ukraine which is much different from what people hear from the headlines right now, as well as it demonstrates the country and its culture in a way that people are not used to know about.