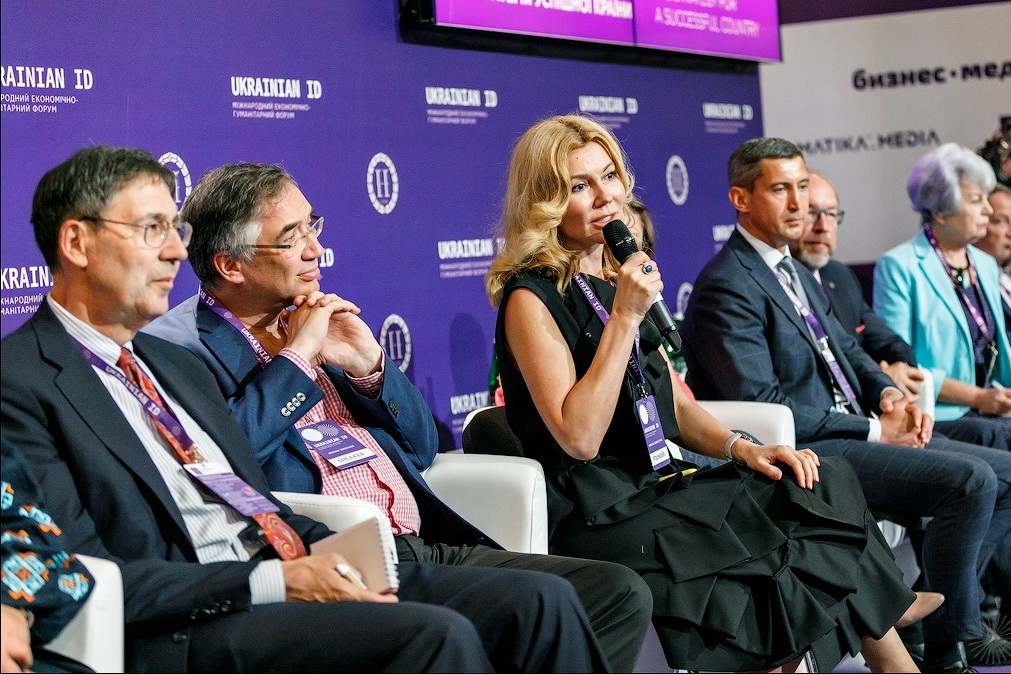 KANIV, Ukraine — Ukraine is squandering its human capital, with millions of its citizens leaving to build better lives abroad. But it doesn’t have to be that way, as the country has plenty of homegrown solutions to the problems it now faces, according to the organizers of a new Ukrainian ID forum held in Kaniv on July 7.

The name of forum, which is modeled on Switzerland’s annual World Economic Forum in Davos, was coined by Gennadiy Chyzhykov, the president of Ukrainian Chamber of Commerce and Industry. According to him, it is an international platform for dialogue in a place that is closely identified with the Ukrainian identity.

“The city of Kaniv is a place of strength where the soul of the Ukrainian people is kept (Ukrainian national poet Taras Shevchenko was reburied here),” said Nataliia Zabolotna, the president of the Ukrainian Humanitarian Development Foundation and an organizer of the event.

“Kaniv could possibly repeat the history of the small town of Davos, which turned into a famous city thanks to the World Economic Forum,” Zabolotna said of the city of 25,000 people located 133 kilometers southeast of Kyiv.

The main goal of the forum was to create a roadmap for Ukraine on how to prepare the country for global economic, social and technological challenges, with the focus being on human capital.

The five panels of the one-day forum covered the main humanitarian issues in Ukraine. The first, entitled “Economy ID” discussed how conditions for human capital to develop could be created.

Inside the country, the economy and the humanitarian sphere are closely connected, and they cannot be separated, panelists said.

“Only with a strong economy can there be investments in the country’s culture, in the social development of the country,” said former Ukrainian Finance Minister Natalie Jaresko.

But economic development is at risk because the country is losing its workforce due to labor migration –the direct result of the absence of a strategy to develop human resources.

However, Russia’s war on Ukraine is no excuse for this, said Anatolii Amelyn, co-founder of Ukraine Institute for the Future.

“Look at Israel, a country that is constantly in the war, but it is developing,´ Amelyn said. “Talents and people are valued there. They invest in technology.”

Investors are frightened by the government’s lack of answers to questions about the country’s strategy and priorities, and by legislation and customs policy changing so often, he said.

“These rules are changing every time with the change of the government, which forgets that the most important thing is the citizens of the country and the quality of their lives,” said Amelyn.

The key point for the roadmap was to create transparent and stable conditions for running a business, and to make conditions more predictable for investors, he said.

Plus, Ukraine needs to invest in its children, teaching them the modern technological skills that are needed in the 21st century.

“We cannot build a strong competitive economy if we do not think about the future of our children,” said Amelyn.

However, the statistics on conditions for children are grim: Ukraine is the worst country in Europe for child alcoholism, and every third man and every fifth woman of working age dies due to alcoholism, according to Zabolotna.

The second panel, “Human Security ID,” was connected to the military threats to the country developing its human capital, including information war.

“Ukraine is now one of the most mined areas in the world, and it should not be a danger for a child to … go to school or play in a playground. It reminds me places I’ve seen in Syria, in Gaza,” said Michael Bociurkiw, a writer and global affairs analyst.

Anna Nemtsova, a correspondent of The Daily Beast online newspaper, said the information war was a direct threat to the lives of Ukrainians.

“Today we see victims of informational war. People, actually, dying as a result of informational war. Here in Ukraine, city managers, regional government, all authorities, protect your journalists! They might investigate your corruption and your mistakes. But it’s their job,” Nemtsova said.

It was also dedicated to developing the country by uniting communities around a wide variety of topics, whether it be classical music, tourism or business ideas.

“When you say Ukraine, the first images that enter (foreigners’) minds are war and corruption… But Ukraine has so much to offer the world, we just need to work on communicating it more effectively,” said Alexa Chopivsky, the executive director of the American Center for a European Ukraine.

“Culture ID,” the fourth panel, discussed the importance of culture for the development of the nation.

Currently in Ukraine there is a policy of “cultural amputation,” according to Zabolotna. She said 1,200 libraries were closed in 2016 across the country. Of the 33,000 village cultural clubs, only 16,000 are operating, with two thirds of them in poor condition.

Moreover, “the whole state system for the protection of cultural heritage has almost been destroyed,” said Olena Terestchenko, a member of the coordination committee of the non-government organization “Kyiv Viche.”

Denys Bloshchynskyi, the co-founder of the Leopolis Jazz Festival, said investing in culture also makes economic sense. “Culture includes both investment and development. Every dollar invested in an event in the creative economy – exhibitions, festivals – returns $4. Today, this figure, I am sure, is even higher,” said Bloshchynskyi.

The forum wound up with the fifth panel, called “Technology ID,” where panelists discussed the role of technology in promoting Ukraine and breathing new life into its culture.

As mentioned by Kadie Ward, a senior adviser of the PLEDDG project, a local economic development assistance program, Ukraine has technologies, but the main question is how they can be used, for example, to fight corruption.

Despite all negative forecasts for Ukrainian social and economic development, some of the experts at the forum said they were hopeful for improvements, but that Ukrainians needed some more self-belief.

“Very often a sense of inferiority, which is very deeply rooted in the Ukrainian psyche, holds people back. As we present ourselves to people – this is how they treat us,” said Daniel Bilak, chief investment adviser to Ukrainian Prime Minister Volodymyr Goysman.  “Every Ukrainian must draw some conclusions about how he or she sees themselves.”

Amelyn said: “I see some movement here, but it is still slow. Ukraine is one of the most promising countries in Europe, and it could be next European economic tiger.”

The forum was organized by the Ukrainian Humanitarian Development Foundation, Kaniv City Hall and Ukrainian Chamber of Commerce and Industry with support from the Embassy of Canada in Ukraine, Embassy of Switzerland in Ukraine and Delegation of the European Union to Ukraine. More information is available on the website: http://ukr-id.org/