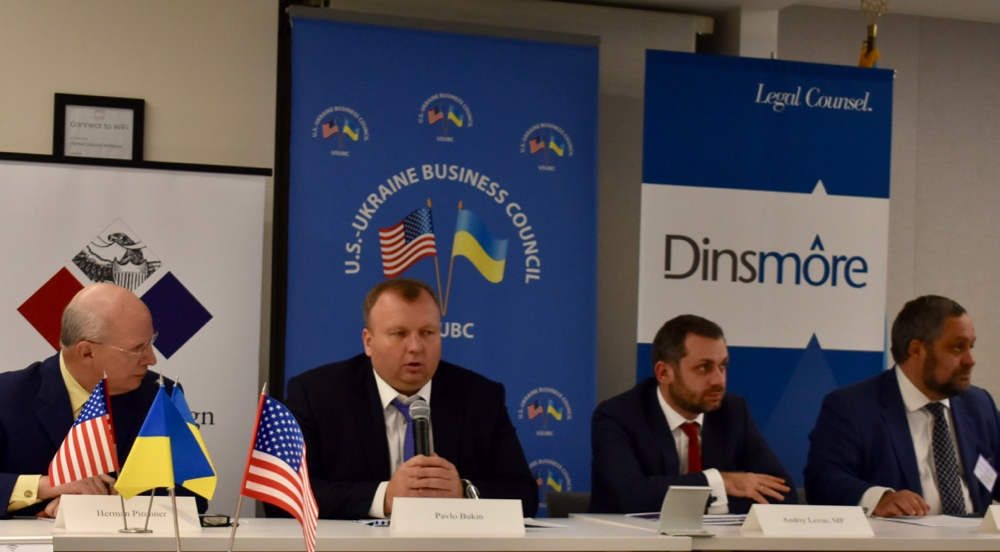 Ukraine’s giant state-owned defense conglomerate, UkrOboronProm, came to the United States earlier this month proclaiming that it has already changed for the better.

That’s even before long-awaited laws are enacted to reform its Soviet-era bureaucracy and privileges, combat corruption, equip it for survival in the free market, and open it up for partnership with domestic and foreign private sector partners.

Arriving on Oct. 12, UkrOboronProm Director General Pavlo Bukin, who was appointed last February, and his deputy Sergii Omelchenko met with U.S. State Department and defense officials, U.S. defense sector companies (which are all private) during a week-long visit.   They were the main guests at two conferences in Washington on Ukraine’s defense industries sponsored by Ukraine’s Quest for Mature Nation Statehood Roundtable, a New York group, and the U.S.-Ukraine Business Council, a non-profit trade association.

Omelchenko added that UkrOboronProm relished the challenge of reform.

“The new team at UkrOboronProm is absolutely pleased to take on this demanding challenge, because we understand that without these changes we cannot raise up our Ukrainian military industry,” he said. “In this situation of war we’re trying to do the maximum to develop everything we still have in our industry.”

As if to emphasize UkrOboronProm’s commitment to change, the state concern’s top management was accompanied on the visit by representatives of Ukraine’s two main private defense industry associations. For years they had complained that the state enterprise hobbled the private sector’s development, but both were happy to share platforms with UkrOboronProm and acknowledged that progress is being made to create a more level playing field.

UkrOboronProm took on its current form in 2010 under the government of Ukraine’s former pro-Kremlin president, Viktor Yanyukovych, who fled after a February 2014 revolution against his autocratic rule and rampant corruption.

Yanukovych’s administration crafted UkrOboronProm’s management structure so that the president and his cronies could crookedly siphon off vast amounts of cash, while the sprawling concern, composed of 130 entities and with 80,000 employees, decayed.

When current President Petro Poroshenko came to power he largely retained the old structure, placing some of his own business associates into key positions. This in turn triggered accusations that he was prolonging corruption and hampering the development of Ukraine’s defense sector, thus diminishing the military’s capacity to defend the country against Russian aggression.

In February UkrOboronProm’s controversial, Poroshenko-appointed boss, Roman Romanov, left and was replaced by Bukin, who brought in new staff and has fired senior UkrOboronProm managers for poor performance and corruption.

He told the Kyiv Post: “The director of the Kharkiv Plant of Transport Equipment, who was detained red-handed in a bribery case, was immediately dismissed by me. Prosecution is not my function and I do not want to make PR out of it… I would (simply) like to create an intolerant atmosphere towards corruption. That requires a variety of measures, not only harsh ones. Competitive wages are also an important precursor.”

UkrOboronProm had been a hybrid monster, in as much as it had a regulatory function for all defense-related business. Any procurement by Ukraine’s Defense Ministry, other security agencies, and the private sector had to go through the sluggish state enterprise, which took a commission for its services. Ukraine’s private sector felt it was being unfairly restricted by its giant and privileged government-owned rival, which set the rules of the game and forced private companies to apply for licenses and pay commissions to UkrOboronProm to export their products.

A member of the Ukrainian parliament, Andriy Levus, who is on the Rada’s national security committee, said there are plans for an oversight body to monitor UkrOboronProm. He said the exact form of a supervisory structure is still to be determined by lawmakers, but it will have powers to impose its will over UkrOboronProm and should be in place within months.

“We see real progress and genuine efforts by the new leadership at UkrOboronProm,” Levus said. “We see transparency and a readiness for a dialog, and we see a structure that used to be a ‘state within a state’ becoming more open.”

He said Ukraine’s non-government defense companies “need to create conditions for the private sector to thrive… for which a whole array of laws have yet to be changed.”

Anatoliy Pinchuk, a political activist and adviser to the Association of Ukrainian Defense Manufacturers, has long lobbied for many of the changes at UkrOboronProm addressed by the planned laws.

“I think that most of the proposed laws should be passed by parliament by the end of the year,” Pinchuk told the Kyiv Post. “The oversight body is necessary, but I think it will take some time to put in place… But there have already been important changes, such as that private companies can now get export licenses quickly and without the long delays that used to be routine.”

Bukin said that UkrOboronProm was such a large and complex enterprise, still mired to a great extent in Soviet-era rules and regulations, that is will require a much time and effort to implement all the changes vital to make it healthy and competitive on world markets.

He talked about the possibility of privatizing the concern, perhaps as separate components, in the future. Some 30 non-core companies that did not work directly in security and defense have been shed.  But privatization, said Bukin, needed a lot of preparatory work – including winning over many managers and employees, whose attitude was shaped by Soviet-era suspicions that privatization could be cover for corrupt schemes that would leave them jobless.

Both UkrOboronProm and Ukraine’s private defense businesses hope that the new laws and planned changes will convince the United States and other potential Western partners that the Ukrainian government is committed to reforms that will quell traditional anxieties about corruption and red tape, making foreign investment or partnership an attractive prospect.

Vadym Kodachyhov, chairman of the Association of Ukrainian Defense Manufacturers, said there is a huge market for refurbishing, repairing and upgrading Soviet-designed armored vehicles, aircraft and other equipment. Such weapons are the mainstay of many armies in Eastern Europe, as well as large parts of Asia and Africa. He said that realistically only Ukraine and Russia had the know-how to do the work on a large scale, but currently Moscow had the lion’s share of the market.

Ukrainian private companies, he said, need Western partners who can bring finance and modernize instruments, communications, armor, and other components in weapons platforms.

“We know the clients and can do the job cheaper and better than the Russians,” Kodachyhov said. “With U.S. partners we could dominate the market and both make a profit while diminishing Russia’s budget for making war on Ukraine.”

Bukin told the Kyiv Post he met representatives of the Department of State, Department of Defense, Department of Commerce and discussed some the changes he had introduced in his eight months as head. These include plans for a supervisory board, a 40-percent staff reduction, restructuring of component companies into five divisions including a new marine engineering division, introducing changes to legislation to make state defense procurement more transparent, and initiatives to liberalize the Ukrainian military-industrial market and enhance conditions for the private sector.

He said he and his colleagues met with U.S. companies including General Dynamics Land Systems, Lockheed Martin, Motorola, and DynaCorp.

“Our approach towards building industrial cooperation projects with the American Defense companies is… (that) we should start with perhaps small but concrete projects that allow us to at least understand each other better and to share our industrial cultures,” Bukin said.

“We brought several ideas for such startups to the attention of our colleagues in the United States. As far as I understand, these ideas are interesting to them and we’re expecting some technical delegations in Ukraine soon.

“I hope it was evident to our counterparts in the United States that something substantial has been done (at UkrOboronProm). I personally feel that it has.”