MARIE L. YOVANOVITCH CONFIRMED BY U.S. SENATE TO BE U.S. AMBASSADOR TO UKRAINE 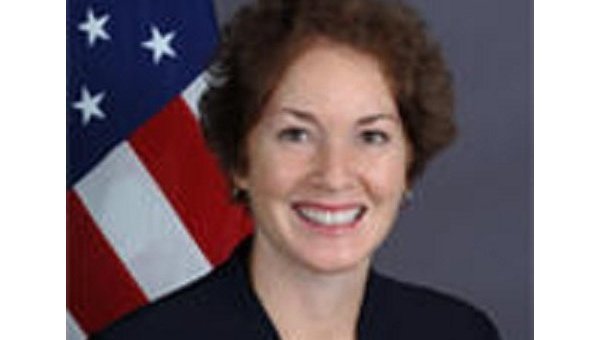 WASHINGTON, D.C. -- Marie L. Yovanovitch, of Connecticut, a Career Member of the Senior Foreign Service, Class of Minister-Counselor, was confirmed by the United States Senate on Thursday, July 14, 2016, to be Ambassador Extraordinary and Plenipotentiary of the United States of America to Ukraine.

Marie Yovanovitch replaces Geoffrey Pyatt who was confirmed to be the new U.S. Ambassador to Greece. The nominations were passed by voice vote Thursday before Congress left Washington for a seven-week recess. Other U.S. ambassadors confirmed were Douglas Silliman for Iraq, Anne Hall for Lithuania, Lawrence Silverman for Kuwait and Carol Perex for Chile. The ambassadors all are career members of the senior foreign service.

The over 200 members of the U.S.-Ukraine Business Council (USUBC), www.USUBC.org, congratulate Ambassador Yovanovitch on her appointment and look forward to working with her in Kyiv.  Ambassador Yovanovitch previously served as U.S. Ambassador to Armenia and Kyrgyzstan and was Deputy Chief of Mission at the U.S. Embassy in Kyiv from 2001-2004.

Marie L. Yovanovitch, has been currently serving as Dean of the School of Language Studies at the Department of State’s Foreign Service Institute, a position she has held since 2014.  Ms. Yovanovitch was Deputy Commandant at the Eisenhower School at the National Defense University from 2013 to 2014.  She served in the Department of State’s Bureau of European and Eurasian Affairs as Principal Deputy Assistant Secretary from 2012 to 2013 and as Deputy Assistant Secretary from 2011 to 2012.

Prior to that, she served as U.S. Ambassador to Armenia from 2008 to 2011 and as U.S. Ambassador to Kyrgyzstan from 2005 to 2008.  Ms. Yovanovitch was Senior Advisor and Executive Assistant in the Office of the Under Secretary for Political Affairs from 2004 to 2005 and Deputy Chief of Mission at the U.S. Embassy in Kyiv, Ukraine from 2001 to 2004.  Since joining the Foreign Service in 1986, she has also served at posts in Canada, Russia, Somalia, and the United Kingdom.  Ms. Yovanovitch received a B.A. from Princeton University and an M.S. from the National War College.

TESTIMONY OF AMBASSADOR MASHA YOVANOVITCH NOMINEE TO BE U.S. AMBASSADOR TO UKRAINE

Chairman Corker, Ranking Member Cardin, members of this committee. It is a privilege and an honor to appear before you today as President Obama’s nominee to serve as the United States Ambassador to Ukraine. If confirmed, I look forward to working with this Committee and Congress to continue our strong support for the Ukrainian people, enhance our already deep bilateral relationship, support Ukraine’s reform agenda, and protect its sovereignty and territorial integrity. These steps will be critical to advancing our shared goal of a Europe whole, free, and at peace.

I’d like to introduce my mother, who is 88 years young, and has been a constant source of support and inspiration. I wish my father could have been here today also; he would have been so moved. Like so many, including those in the Ukrainian American community, my parents’ lives were changed forever by Communist and Nazi regimes.

They survived poverty, war and displacement, and finally arrived in the United States, with me in tow, in search of freedom, opportunity, dignity and accountability. The very values that Ukrainians demanded in the 2014 Revolution of Dignity.

If confirmed, I look forward to continuing the work of my friend and colleague Ambassador Geoff Pyatt in helping Ukrainians make the dream they fought for a reality. I bring 30 years of experience at the State Department and have worked throughout the region, including in Russia as a political officer, Ukraine as Deputy Chief of Mission, and Kyrgyzstan and Armenia as Ambassador. In addition, I served as Principal Deputy Assistant Secretary of State for European and Eurasian Affairs, where I covered bilateral and multilateral issues affecting our relations with Europe.

Ukraine has made more important progress on reforms in the last two years than it did in its first 23 years of independence. And I am especially optimistic about Ukraine’s reform trajectory this year, given several key achievements since the reformation of the coalition and government in April. Ukraine overwhelmingly approved constitutional amendments to strengthen judicial independence; raised energy tariffs to 100% of market rates ahead of the IMF’s schedule; and replaced a Prosecutor General who had lost the trust of civil society with one who has committed to reforming the PGO. Many of you, no doubt, met with the Prime Minister and cabinet ministers who were here in Washington last week and received a first-hand account of the progress Ukraine is making. These reform achievements are all the more impressive given that they have come in the face of Russian aggression. The best defense against Russian aggression is a successful Ukraine.

But of course, much work remains to be done. Ukraine still has to implement difficult changes such as: taking further steps to root out corruption; advancing energy sector reform; recapitalizing and reforming the banking system; working to improve the business climate by levelling the playing field; improving accountability and civilian control in the defense sector; reforming the PGO and justice sector; and breaking the hold of oligarchs over Ukrainian politics and business. Ukraine must also continue to adhere to IMF conditions and ensure that the $17.5 billion program continues.

I want to thank Congress for its commitment and support by providing assistance to Ukraine. It has been critical to making real changes in the lives of Ukrainians and delivering on the promise of the Maidan. With strong bipartisan support, the United States has provided over $1.3 billion in assistance since 2014, including over $112 million in humanitarian assistance, as well as three $1 billion loan guarantees, the third of which we expect to disburse later this year. We continue to support Ukrainian civil society and independent media, which help Ukrainian citizens hold their government accountable to its reform pledges.

Thanks to Congress’ support, we have been able to devote over $600 million to helping Ukraine undertake needed security reforms, better monitor and secure its borders, deploy its forces more safely and effectively, and defend its sovereignty and territorial integrity. We have trained over 1,700 Ukrainian conventional forces and National Guard personnel and 120 Special Operations Forces (SOF). We have provided counter-artillery and counter-mortar radars, night and thermal vision devices, over 3000 secure radios, 130 Humvees, over 100 armored civilian SUVs, and tens of thousands of medical kits to help Ukrainian troops successfully resist advances and save lives.

Just as we stand firmly behind the Ukrainian people in their efforts to transform their nation, we stand with Ukraine as it seeks to reform its military, stop further Russian aggression, bring the conflict in the Donbas to a peaceful conclusion via the Minsk agreements, and end the occupation of Crimea. The conflict in the East has exacted a heavy toll on Ukraine, resulting in an estimated 10,000 Ukrainians killed and 2.5 million refugees and internally displaced persons. As President Obama has stated, the United States will continue to work for the full implementation of the Minsk agreements, until which time sanctions on Russia will continue. We are working with the Normandy powers of France, Germany, Russia, and Ukraine, as well as the OSCE, to make this a reality and restore peace to eastern Ukraine.

Ukraine has lived up to many Minsk commitments already. But Russia and the separatists have not. Violence has spiked in the past two months to reach levels we have not seen since August 2015. Russia and the separatists must end their attacks -- they continue to commit the majority of ceasefire violations -- and withdraw banned heavy weapons, while providing the OSCE full, unfettered access throughout the conflict zone and guaranteeing monitors’ safety. A sustained improvement in security will allow Ukraine to pass a Donbas election law, hold local elections in portions of eastern Ukraine, and implement special status and amnesty. These steps should lead to Russia’s withdrawal from Ukraine and restoration of Ukrainian control over its side of the international border.

Finally, as President Obama has stated clearly, we do not and will not recognize Russia’s attempted annexation of Crimea. We are working with the Government of Ukraine as well as our partners and allies to highlight Russian abuses targeting Crimean Tatars and others opposed to Russia’s illegal occupation as well as ensure that the costs to Russia continue, including through sanctions, until Crimea is returned to Ukraine.

Mr. Chairman and Members of the Committee, thank you for this opportunity to appear before you. I welcome any questions you may have. Thank you.

NOTE:  If you do not wish to be on the U.S.-Ukraine Business Council (USUBC), distribution list please write to usubc@usubc.org.