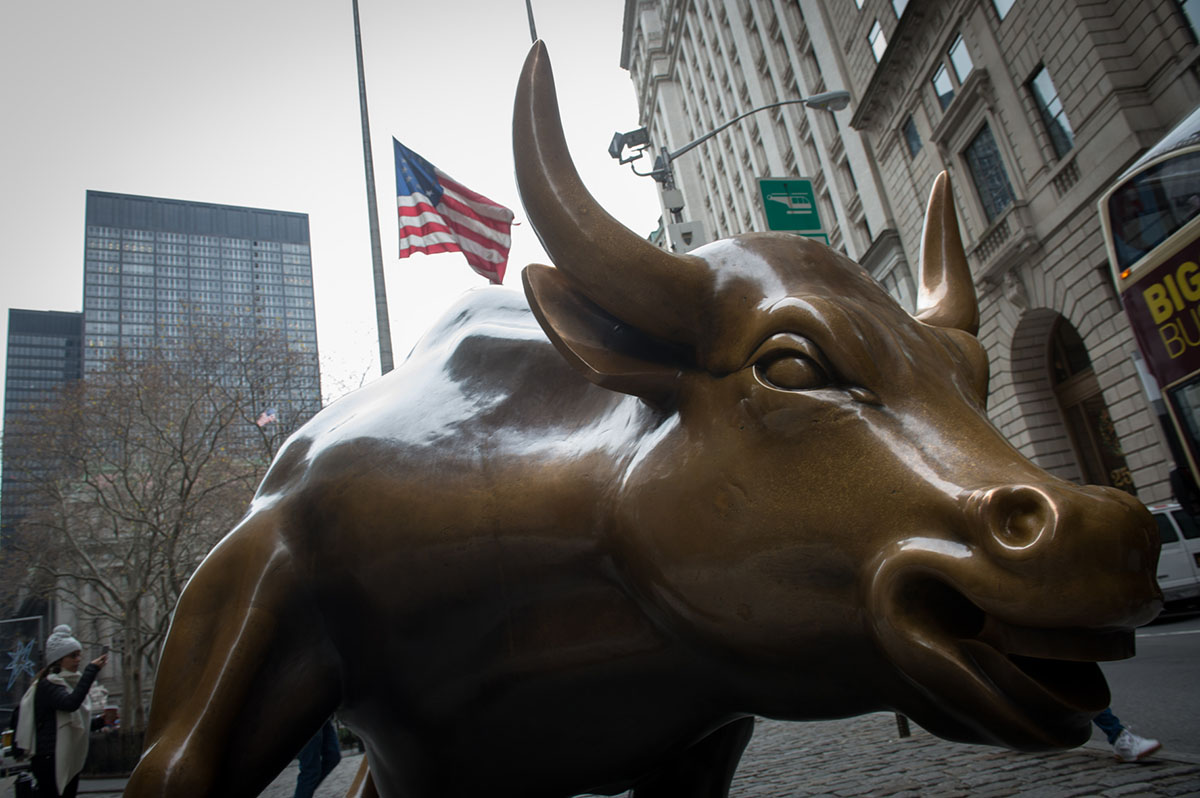 It was April 2018, and Andy Hunder was in Washington, D. C. He dropped into a CVS pharmacy and purchased a few Milka Oreo chocolate bars.

Then he headed off to give a presentation at the Washngton D. C. office of law firm Baker McKenzie. There, Hunder whipped out the chocolate bars, much to the surprise of his audience.

“On the back it actually says ‘Made in Ukraine,’” he told the Kyiv Post, recalling the meeting.

Hunder, president of the U. S. Chamber of Commerce in Kyiv, had come to D.C. to promote Ukraine as an investment destination. The Milka story illustrates the kind of commercial connections he is working for.

The chocolate bars came from a factory in the city of Trostianets in Ukraine’s eastern Sumy Oblast, where Mondelez International produces Oreo cookies. From there, they crossed the Atlantic Ocean, went through U.S. customs, and found their way to a display near a CVS checkout aisle in the U.S. capital.

To anyone familiar with U.S.-Ukrainian bilateral trade, the Milka story is clearly the exception rather than the rule. But many believe that it doesn’t have to be. As Ukraine grows more stable, American businesses increasingly see opportunities in the country. And some Ukrainian firms are even eyeing the far-off and challenging U.S. market.

In 2017, total bilateral trade between the U.S. and Ukraine reached roughly $3.35 billion, according to Ukraine’s state statistical agency. Ukraine has a significant trade deficit with the U.S., with imports at $2.25 billion.

But over the last several years, trade between the two countries has grown and, while it may not be a record high as it was in 2008 at $4.8 billion, the general picture is positive, analysts say.

After the EuroMaidan Revolution that drove President Viktor Yanukovych from office and Russia’s invasion in 2014, Ukraine’s gross domestic product, GDP, nosedived to $91 billion from $183 billion, a deep recession accompanied by a sharp two-thirds drop in the value of the currency.

Now the situation has stabilized, both politically and economically. Reforms in the country may still leave much to be desired, but the government has taken several important steps to ease the way for international business.

In April 2017, after years of exporters struggling to get their value added tax, or VAT, back, the government launched a new transparent online system regulating VAT returns.

These changes and the broader stabilization have had a noticeable effect on the investment climate.

“We’re picking up on the mood of U.S. business,” says Morgan Williams, director of the U.S.-Ukraine Business Council, a non-profit trade organization based in Washington D. C. that promotes bilateral trade ties. “Whether expanding or getting involved in Ukraine for the first time, the mood is more positive.”

Williams says his slogan is “full speed ahead.” He is trying to convince U.S. companies that the time to invest in Ukraine is now. In the past, companies have demurred, waiting for a more opportune moment. But this can mean an endless delay, Williams says.

“We’re telling [U.S. companies], ‘Don’t wait until all the problems are solved, because they’re never going to [all] be solved,’” he says. “But we still think Ukraine is a very successful market.”

While new investors may take some coaxing, those who are already here have a more positive outlook. According to a survey by the American Chamber of Commerce, 67 percent of its members saw their businesses grow in 2017. And 82 percent plan to expand in 2018.

From agriculture to IT?

This summer, Cargill, together with MC Cargo, is set to launch a grain terminal at Port Yuzhny in Ukraine’s Odesa Oblast. Former U. S. company Monsanto (bought by German Bayer for $63 billion on June 7) plans to open a new factory to produce corn seeds in Zhytomyr Oblast. DuPont Pioneer produces sunflower and corn seeds in the Poltava region.

And Westinghouse Electric now provides fuel for seven out of Ukraine’s 15 nuclear reactors, allowing Ukraine to replace Russian fuel with a less politically sensitive alternative. Holtec is investing in spent nuclear fuel storage, a project that can save Ukraine $2-$2.5 billion over 10 years.

Companies already present in Ukraine are also expanding. Later this year McDonald’s will open a new branch in Ternopil, a first for the city.

And little is static in Ukraine: new industries are always emerging. The alternative energy company EuroCape has received $400 million in financing and political risk insurance from the U. S. Overseas Private Investment Corporation to develop Zaporizhia Wind Park – a project projected to power 780,000 homes, according to Eurocape.

Ukraine’s IT sector also plays an important and growing role in bilateral trade with the U. S. The industry is heavily reliant on outsourcing projects, in which Ukrainian firms carry out contracts for Western companies.

The U. S. is one of the top three sources of these contracts, according to Sofia Belenkova, who heads the Kharkiv IT Cluster. “For 70 percent of the companies, [the U.S.] makes up more than 80 percent of the market targeting,” she says.

But while outsourcing is a “good moneymaker,” there is much more to Ukrainian IT, says Jaroslawa Johnson, CEO of the Western NIS Enterprise Fund, which invests in small and medium business in Ukraine and Moldova.

The fund is particularly interested in “Ukrainian companies that are developing apps so that Ukraine can be a startup nation,” she says. 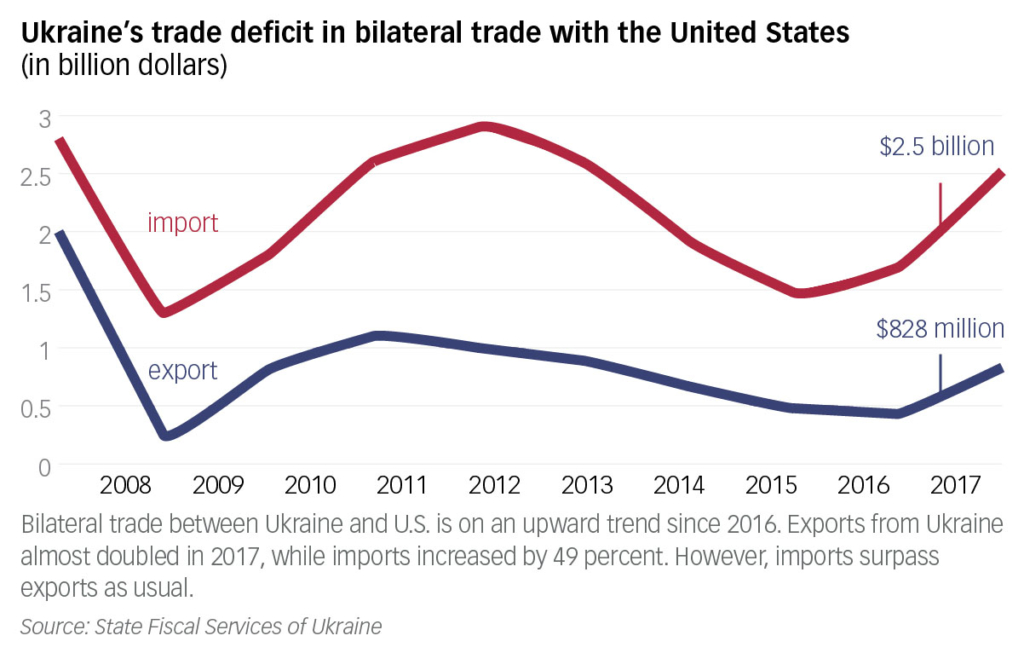 IT is perhaps the industry with the easiest access to the American market. In an increasingly globalized world connected by the internet, Ukrainian firms can work with U.S. partners from a distance, sometimes without even a face-to-face meeting.

“Our Ukrainian programmers are no worse, and often better than their competitors,” says Denys Krasnikov, vice president of the Ukrainian League of Industrialists and Entrepreneurs business union. “But they are ready to work more and more actively. As a result, their programming products often win on price.”

But other exports also have a shot. Ukrainian sunflower oil, condensed milk, honey, ketchup, and mayonnaise all have a certain foothold in the U. S. Traditionally, they have been sold at ethnic markets catering to immigrants from the former Soviet Union.

But some are moving into more mainstream supermarket chains. There are also opportunities to produce for these chains’ generic brands — called “private labels” — which are often less expensive than name brands and do not require heavy investments in marketing, says Krasnikov.

Ukrainian firms can also succeed with what he terms “niche goods.” But this depends upon identifying products where there is a significant price difference between the U.S. and Ukraine and certification requirements are not overly onerous. Krasnikov lists certain chemical reagents, cosmetic creams, and technical devices as possible examples.

“Few know this, but many bottles of Bacardi around the world use aluminum caps created in [Ukraine’s] Sumy Oblast,” Krasnikov told the Kyiv Post. “They conquered not only the U.S. market, but the world market.”

For all the prospects of U.S.-Ukrainian bilateral trade and investment, there are also a number of significant challenges.

Ukrainian exporters face an uphill battle. Goods sold in America require extensive certifications and normative documents, and the market is extremely developed and mobilized. Established companies have done everything in their power to block new competitors, Krasnikov says. Moreover, with the hryvnia still weak after the 2014 economic crash, it is often financially impossible for Ukrainian companies to market their goods in the U.S.

American firms also have their own concerns about entering Ukraine. Intellectual property rights are still weakly enforced, and many investors worry about continued corruption.

Powerful state-owned companies still strongly oppose the entry of competitors in the market and create obstacles for them, Williams says. They make the business environment in the energy and infrastructure sectors particularly negative.

For example, several mid-sized U.S. companies are interested in the hydrocarbon industry in Ukraine. Most are quite successful, but not household names, Williams said.

They are “ready to come in and work in oil and gas production,” he says. “But not in the hostile environment that now exists.”