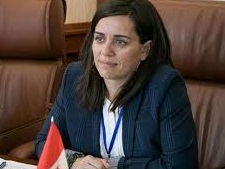 Larisa Galadza (BA Hons [Political Science and Ethics], Trinity College at the University of Toronto, 1994; MA [International Affairs], Carleton University, 1996) joined the Department of National Defence in 1996. She worked in policy-related positions at the Privy Council Office in 2001 and at the Treasury Board Secretariat from 2003 to 2006, before moving to Public Safety Canada, where she was director of Strategic Policy and Research and then senior director for National Security Policy. From 2012 to 2014, she served at the Privy Council Office as director of operations for the Social Affairs Committee of Cabinet, and then, from 2014 to 2016, she was director general of Admissibility at Citizenship and Immigration Canada. In 2016, she became director general of the Peace and Stabilization Operations Program at Global Affairs Canada.