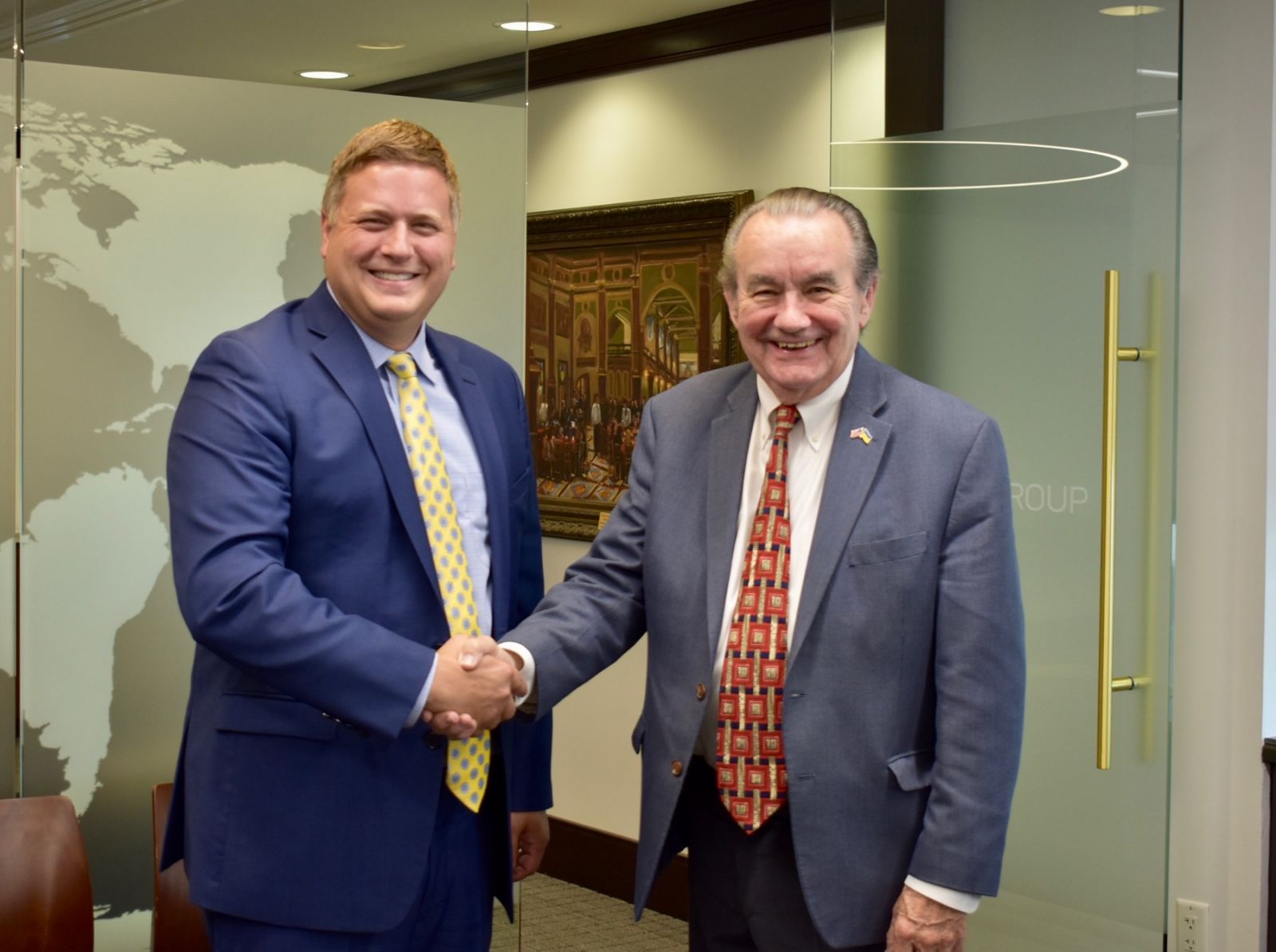 Our special Thank You to BGR Group,
a member of USUBC for hosting this event!

On Wednesday, September 4, members of U.S.-Ukraine Business Council(USUBC) had a great opportunity to attend a roundtable with Ian Steff, Deputy Assistant Secretary for Manufacturing, U.S. Department of Commerce, International Trade Administration who is performing the non-exclusive functions and duties of the Assistant Secretary for Global Markets, Director General of the United States and Foreign Commercial Service.

The meeting took place in the offices of BGR Group, a member of USUBC.

DAS Ian Steff brought opening remarks about  US Department of Commerce goals and priorities for Ukraine  for the nearest future, the business environment in Ukraine and US companies doing business there, suggested actions recommended to the government of Ukraine to improve investment and business opportunities in the country. 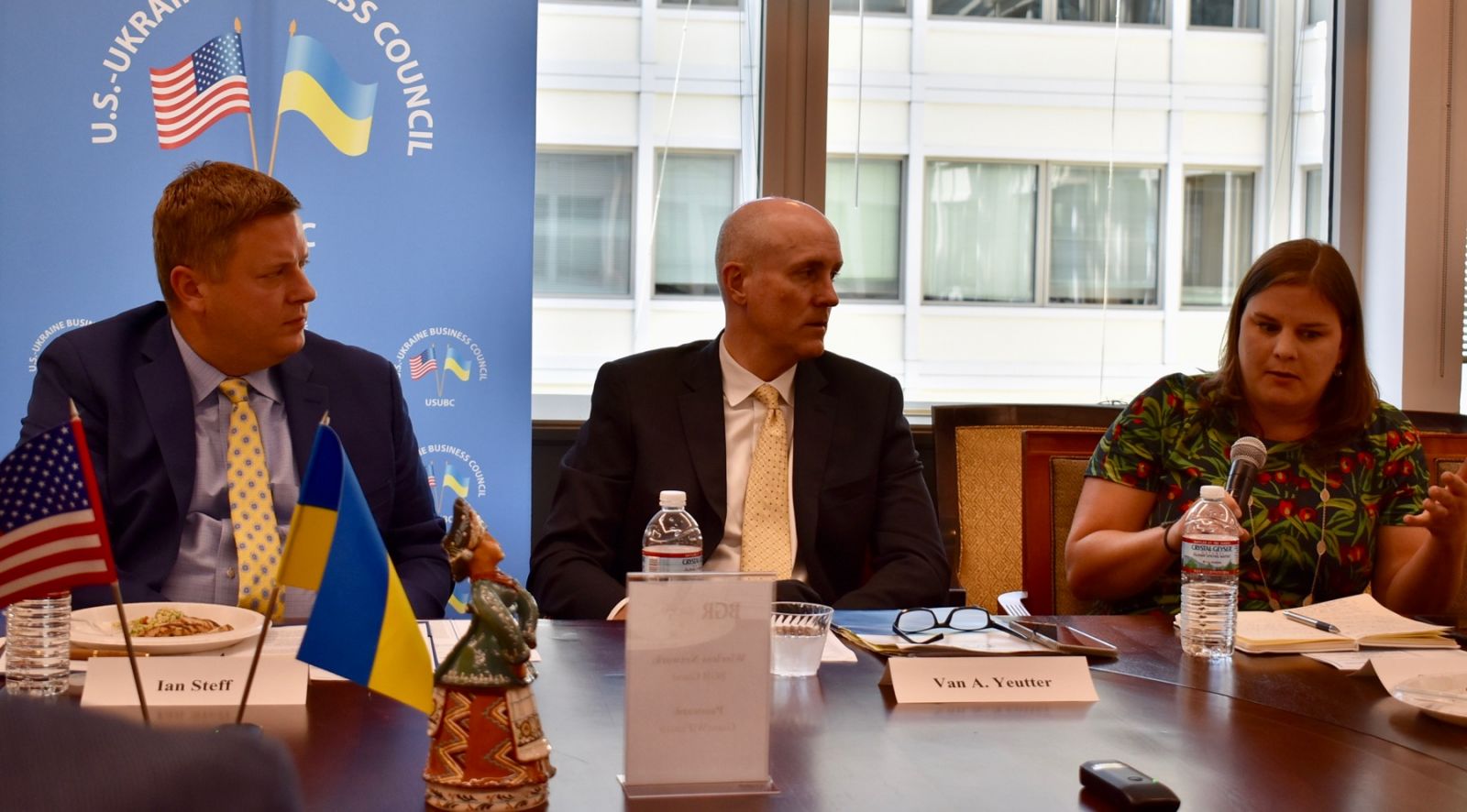 In the picture left to right: Ian Steff, U.S. Department of Commerce, Van Yeutter, Cargill; Sarah Dean, John Deere;
USUBC members shared their thoughts and feedback about the most critical issues their industries are facing in Ukraine and discussed possible ways of overcoming them. 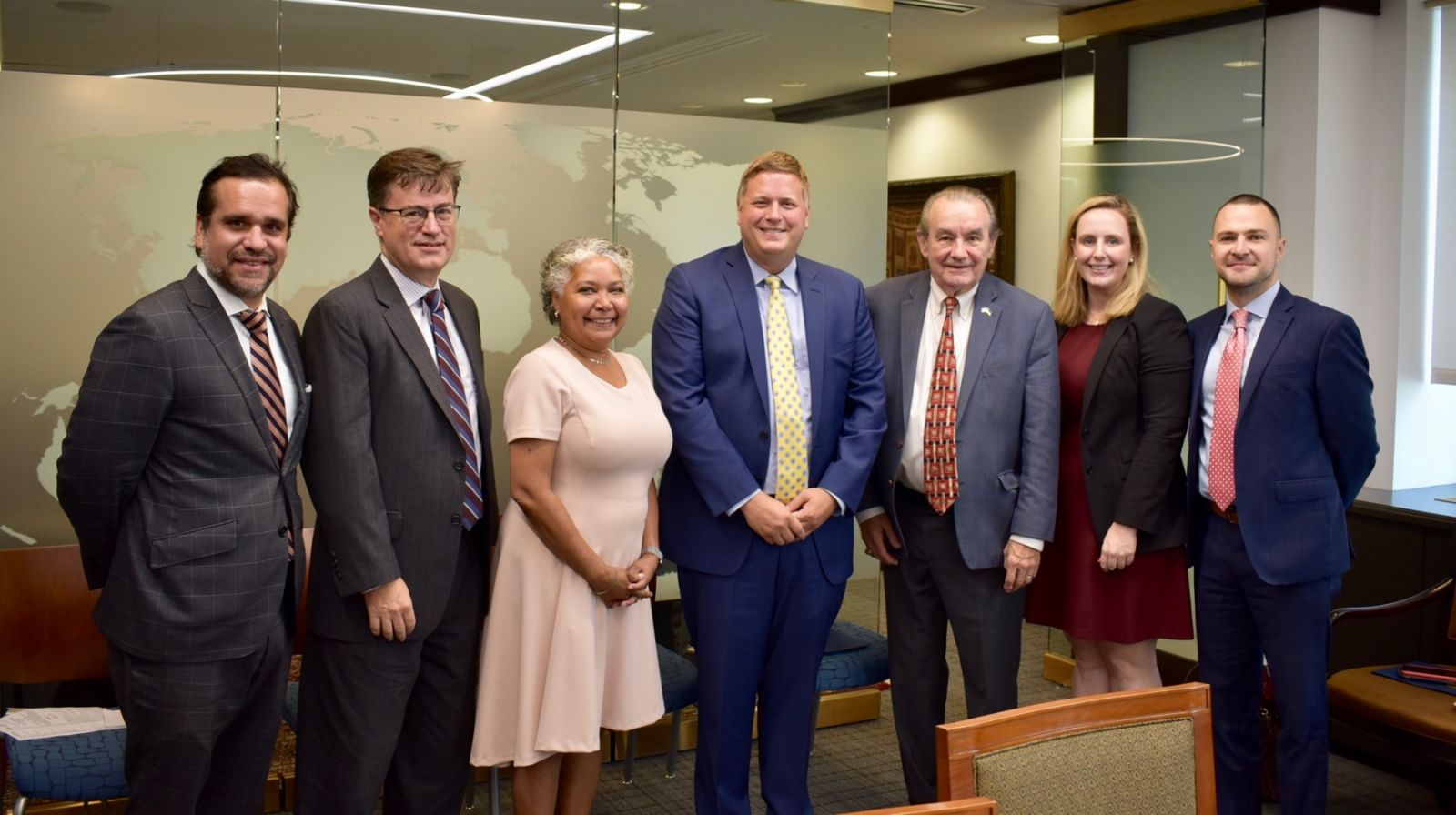 DAS Ian Steff led a U.S. government delegation to Kyiv, Ukraine in June, 2019.  USUBC with 8 member companies, hosted Ian Steff and the members of the US delegation at a private dinner in Kyiv on the evening of Tuesday, June 25, 2019.  USUBC members were very pleased to have the opportunity to engage with the DAS and were impressed with the DSA's knowledge of business issues in Ukraine and his commitment to business development in Ukraine.

Ian Steff was appointed Deputy Assistant Secretary for Manufacturing at the U.S. Department of Commerce’s International Trade Administration in June 2017. In addition to this capacity he is currently performing the non-exclusive functions and duties of the Assistant Secretary for Global Markets and Director General of the United States and Foreign Commercial Service at request of Commerce Secretary Wilbur Ross.

He oversees approximately 1,400 trade and investment professionals based in more than 100 U.S. cities and 70 markets around the world. He manages a $300 million budget and a broad portfolio of International Trade Administration initiatives aimed at increasing the competitiveness of U.S. manufacturers and service providers. In this capacity, he is among those senior officials responsible for executing the Administration’s plans to foster growth in U.S. jobs, exports, and investments.

Before joining the U.S. Department of Commerce, Steff served as the state of Indiana’s first Chief Innovation Officer under then-Governor Pence and subsequently Governor Holcomb. He was Executive Vice President for the Indiana Economic Development Corporation and the state’s senior advisor for science, technology, and advanced manufacturing. Steff oversaw Indiana’s strategy regarding science and technology economic development and was directly responsible for the implementation of the Governor’s billion-dollar innovation and entrepreneurship initiative.

He worked to expand investments and public-private partnerships in information technology, life sciences, composite materials, nanotechnology, energy storage, and the Internet of Things. Steff served on the Board of the Battery Innovation Center, the Dean of Engineering’s Advisory Council at Purdue University, and the Vice Chancellor for Research’s Advisory Board at IUPUI. Steff also served on the Board of the Institute for Advanced Composites Manufacturing Innovation.

Prior to his roles in the state of Indiana, Steff worked for the Semiconductor Industry Association (SIA) for nearly a decade. At the SIA, he served as vice president of global policy and technology partnerships. He was Executive Chairman the Board of the United States Information Technology Office in Beijing. He was a member of the Executive Committee of the International Technology Roadmap for Semiconductors and the Advisory Board of Rochester Institute of Technology’s School of Microelectronics.