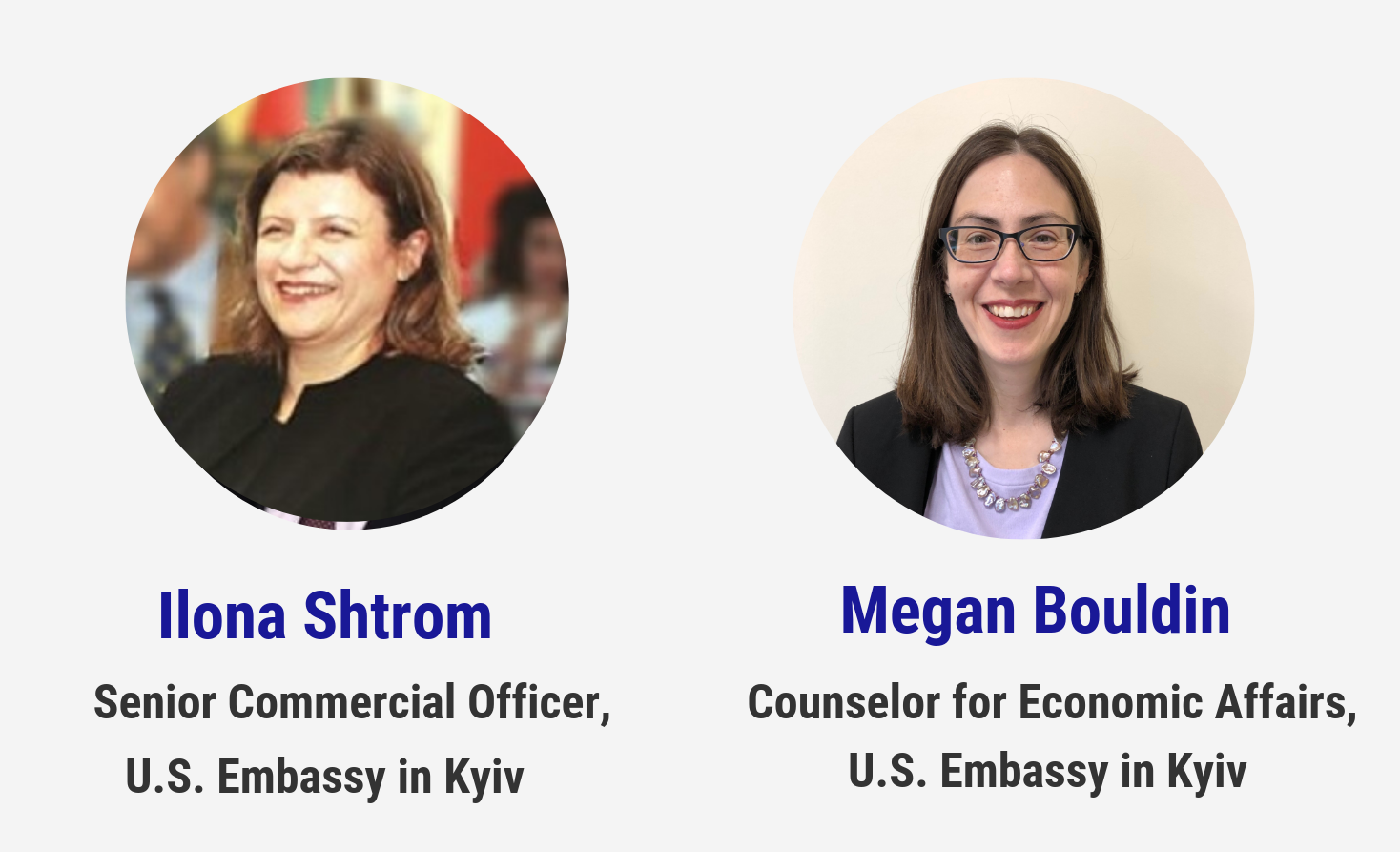 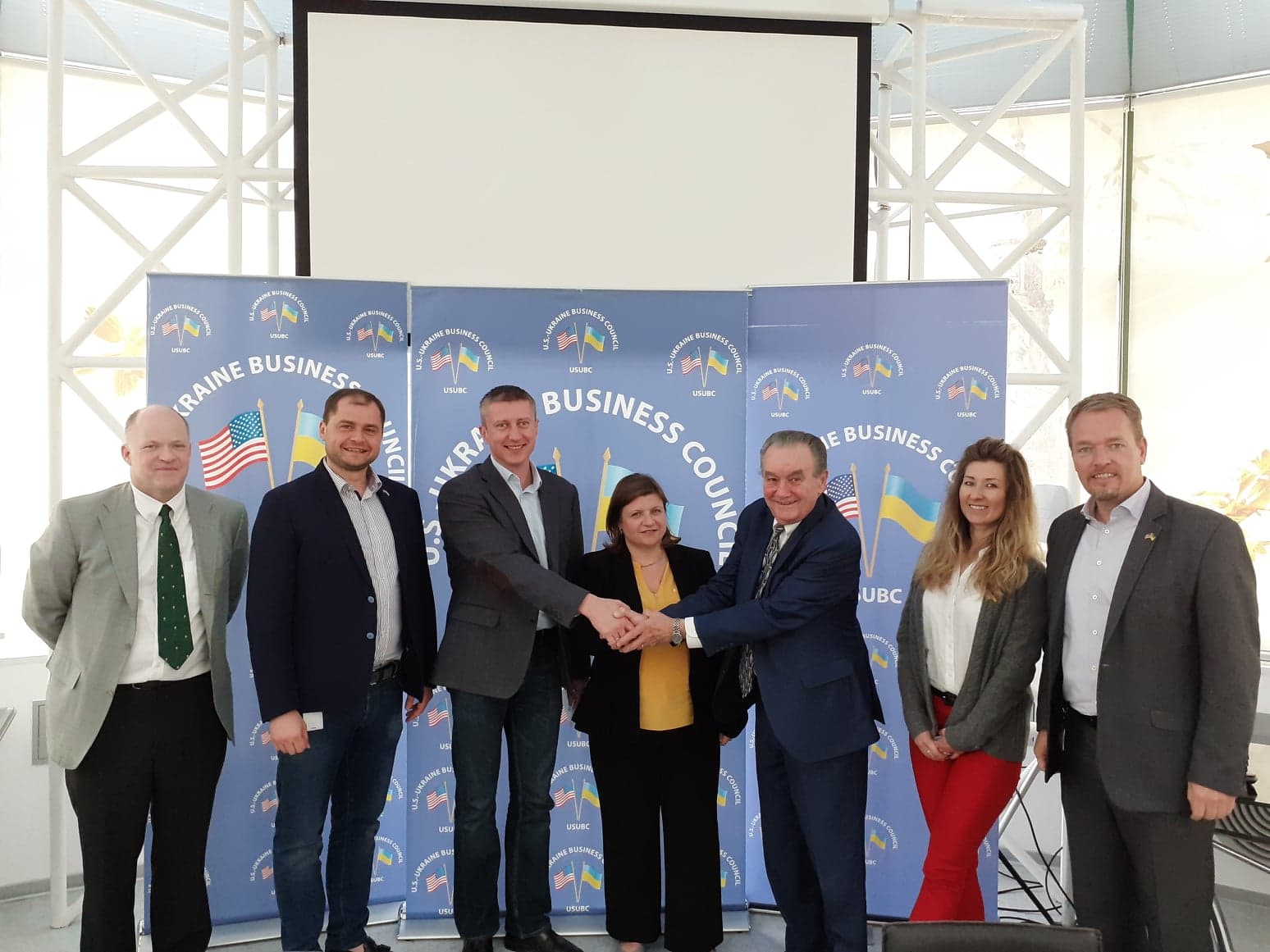 Ilona Shtrom and Megan Bouldin presented opening remarks about their new responsibilities and about the work of the Commerical and Economic Sections on behalf of U.S. companies and regarding the business and economic development of Ukraine. After their presentations, the meeting was open to discussion/Q&A session. 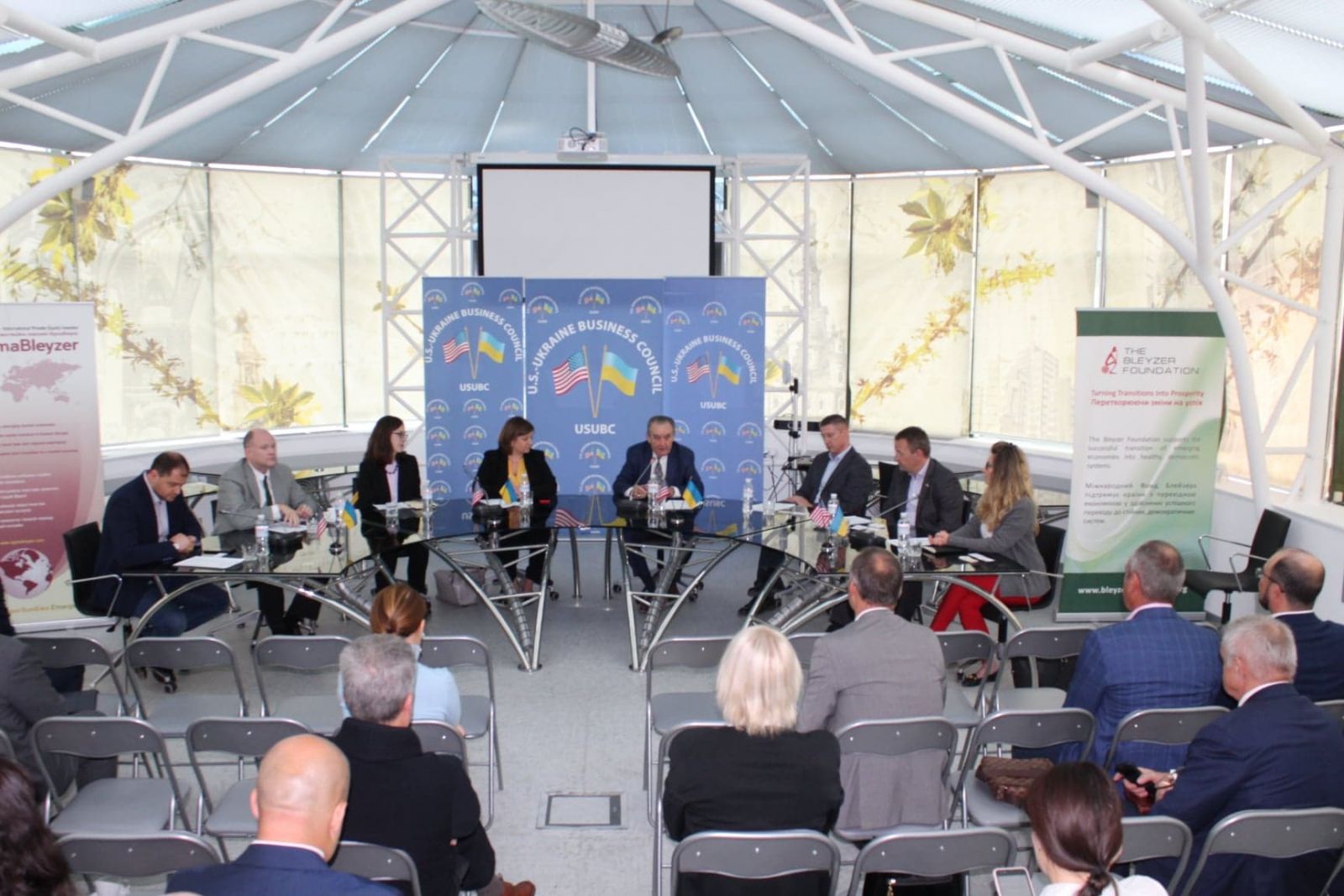 Before arriving to Kyiv in August 2019, Ilona Shtrom represented the Commercial Service as its highest-ranking Commerce Official in Doha, Qatar where she was a Head of the Embassy’s Commercial Section.Ms. Shtrom leads a team of specialists, focusing on advocacy, investment and such sectors as defense, construction/engineering, healthcare, franchising and many others.  From 2011 to 2015, while at the U.S. Mission to the EU in Brussels, Ms. Shtrom was responsible for supporting and counseling U.S. firms wishing to enter the complex European market.  Ms. Shtrom’s portfolio included defense, procurement, export controls and chemicals.

From August 2008 to June 2011, Ms. Shtrom served as a Commercial Attaché at the U.S. Embassy in Moscow, Russia where she led a team of Commercial Specialists in the areas of aerospace, building and construction and ICT.  From June 2006 to August 2008, Ms. Shtrom worked as a Senior Policy Analyst at the U.S. Department of Commerce’s Bureau of Industry and Security (BIS).  Here, she supported BIS’ efforts in administering the deemed export program (the transfer of controlled dual-use technology to foreign nationals in the United States) and advised companies, research organizations and academic institutions on the application and implementation of the regulations.  She also closely coordinated the work of the Deemed Export Advisory Committee, a high-level group of 11 commissioned by Secretary Carlos Gutierrez to study and issue a report on the deemed export program.

Prior to her work with BIS, she spent over six years with the International Trade Administration’s Market Access and Compliance division as a Senior International Trade Specialist.  In this capacity she developed and directed short-term business training programs for senior managers and scientists from the former Soviet Union.  The program aimed to facilitate trade between the United States and the newly formed nations as well improve economic development and conditions locally through the introduction of best practices learned while in the United States.  Before joining the Department of Commerce, Ms. Shtrom worked as a Product Marketing Manager at a major telecommunications company where she was responsible for the company’s voice product business line as well as its VoIP services.

Megan Bouldin is a career Foreign Service Officer who has previously served in Moldova, Armenia, Iraq, and Mongolia overseas, as well as several tours in Washington and service as a Peace Corps Volunteer.  She arrived in Kyiv this summer as Economic Counselor and was most recently overseas as the Political and Economic Section Chief in Moldova from 2015-2018.

She also served as the Deputy Director of the Bureau of European and Eurasian Affairs’ Office of East European Affairs covering Ukraine, Moldova and Belarus from 2013-2015.

She speaks Arabic, French, Mongolian, Russian, and is learning Ukrainian.

A native of Minnesota, Ms. Bouldin studied International Affairs at Columbia University and The George Washington University.  She is married with two children.