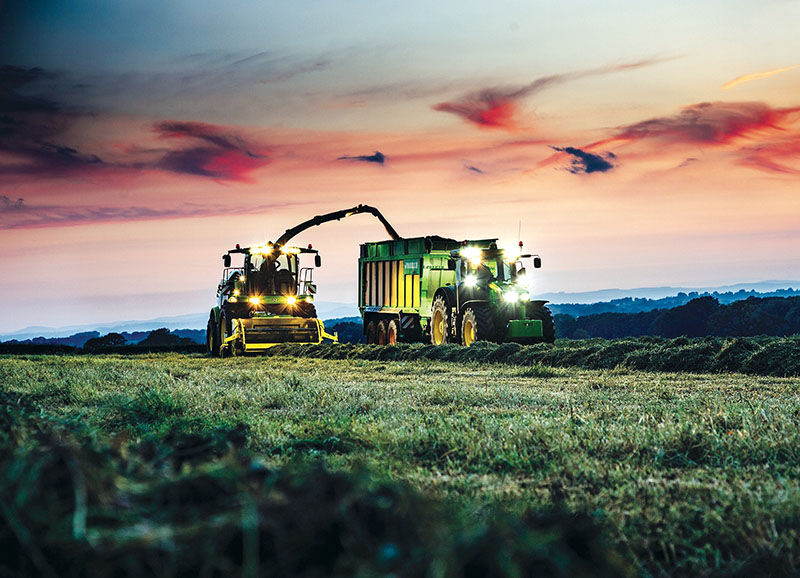 Many Ukrainian agribusinesses favor John Deere equipment, including this combine from the company’s advertising brochure, and import much of it from North Dakota.
Photo by Courtesy of John Deere

Out of all of America’s 50 states, it turns out that North Dakota is the closest to Ukraine.

With crops like sunflowers, beets and corn, the state mimics Ukraine’s farm output, while Fargo — North Dakota’s largest city — is home to several large companies that export agricultural equipment to Ukraine. Fargo frequently hosts Ukrainian visitors on business, and sends its own representatives to Ukraine as well.

The mainstays of Ukraine’s imports from North Dakota are commodities and machinery. In 2016, the state exported $4.73 million in seeders and planters alone to Ukraine.

Not only can foreign farmers see the latest farm machinery, but they can also network and attend seminars on how to use chemicals and how to market their products.

Having hosted hundreds of Ukrainian farmers over the years, Gorder speaks highly of them.

“They are extremely productive and adoptive to new technology such as precision farming techniques, although some smaller farms are lagging,” he said.

Precision agriculture uses a GPS controller in tractors that allows them to automatically steer the equipment based on the coordinates of a field. This prevents them from repeating the same piece of land or accidentally skipping another parcel.

Gorder believes that the use of IT in agriculture will transform Ukraine’s farming in the next 2–4 years.

Fargo’s close ties to Ukraine are underwritten by the soil beneath the city itself.

“When they named the soil here, they said it’s just like the great Ukrainian soil chernozem, so our soil scientist said that’s what it is,” said Howard Dahl, owner of Amity Technology and chairman of the board at Astarta. “Not many Americans know it’s a Russian word.”

Dahl has been working in Ukraine since the country achieved independence. In fall 1991, Dahl recounted, he came to Ukraine to sell air seeders, a piece of equipment that uses air pressure to insert seeds or fertilizer into the ground.

“It was just a mixture of relationships,” Dahl said, describing Ukraine’s business environment in the 1990s.

Dahl recounted one story in which he sold a batch of farming equipment to the son of a top official on a 50 percent down payment, with the rest of the amount to be paid after harvest.

But the official’s son never paid off the loan. Dahl contemplated suing him over the debt, but his lawyer gave a warning.

“There was a bigger problem: If we brought a case, he’s bribed the judge and threatened to kill the chief witness,” Dahl recalled, adding that “it really wasn’t until 2000, 2001 that we began working with regular dealers like we would have in the United States.”

In the 2000s, Dahl formed a close relationship with Astarta, a Kyiv-based agroholding that is Ukraine’s largest producer of sugar.

According to Astarta Chief Operating Officer Zeljko Erceg, the partnership is partly motivated by similarities in American and Ukrainian approaches to farming.

“If we are talking about approaches to technology in growing crops, our approach and the approach in Ukraine or Russia is much more similar to the American way of agriculture than the European one,” Erceg said, adding that European farms are “much smaller than in the United States, especially in comparison with agroholdings in Ukraine.

Dahl added that in terms of climate, many of the same crops that grow in North Dakota also grow in Ukraine.

“Within 100 miles of Fargo, you can watch great production of sugar beets, sunflowers, corn, soybeans, wheat, rapeseed, potatoes,” Dahl said. “You can see all the crops that are raised in Ukraine and see them produced in an effective way.” 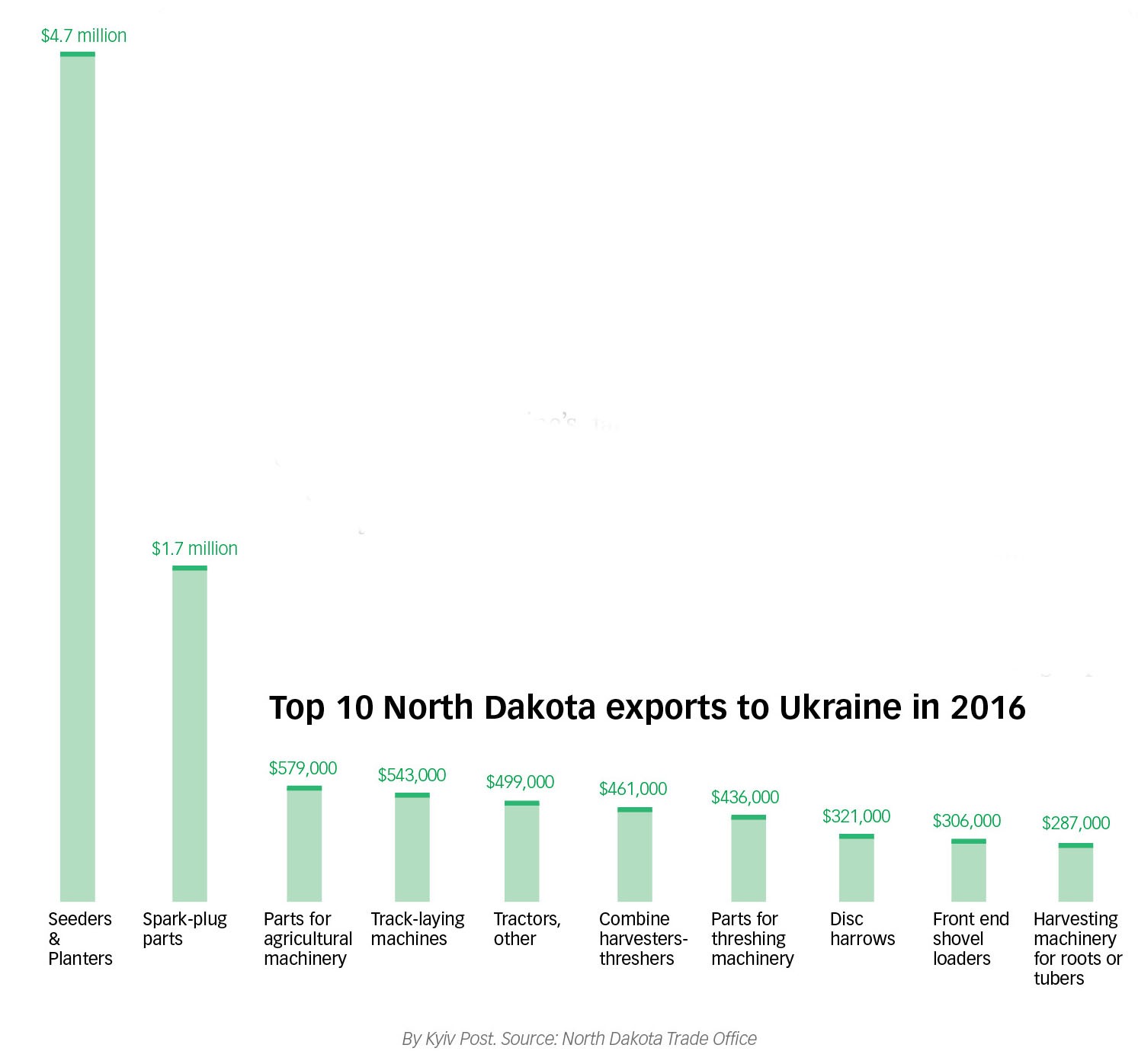 In 2017, exports from North Dakota to Ukraine have seen growth in sales of no-till seeders and planters ($1.8 million), tractors ($1.4 million), and harvesting machinery ($1.7 million), according to data from the North Dakota trade office.

Exports of parts for machinery have also increased.

Titan Machinery, the largest American dealer of agricultural equipment based in Fargo, has been operating in Ukraine since 2012. It has four service centers in Kyiv, Vinnitsya, Zhytomyr, and Chernihiv.

According to Titan general director Yuriy Alatortsev, they sell around 150 tractors and 40 combiners a year.

He said that Ukrainian farmers have recently begun to prefer new equipment over used models, as the sector becomes more profitable. Ukraine’s recovery from its economic crisis has also spurred some banks to offer lending programs that allow farmers to lease American equipment — OTP Leasing, Raiffeisen Leasing Aval, and agrobusiness loans from ProCredit Bank all play a role in this.

As the harvesting season kicks off in July, Titan Machinery is renting out a fleet of 25 machines for prices of $50 per hectare, depending on crops and season.

“We harvest about 50,000 hectares every year. Companies that hire our fleet don’t have to worry about equipment and maintenance,” said Alatortsev.