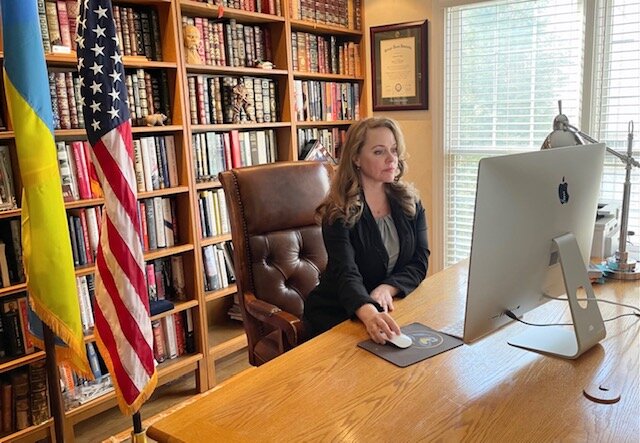 People of Ukraine Foundation is a member of
U.S.-Ukraine Business Council (USUBC)

WASHINGTON — Ukrainian American Tetyana Shea [in the photo] has been teaching Ukrainian military veterans English via Zoom since 2019 to increase their employment prospects and now hopes to offer basic computing courses – all for free.

Shea was born into a Ukrainian family living in Uzbekistan because of her father’s service in the Soviet military. They moved to Kyiv when she was seven and she graduated as a teacher from Kyiv’s Shevchenko Pedagogical College.

She met in Kyiv and married her American husband and they moved to the U.S. in 2000. They live with their three children in the state of Virginia, close to Washington D.C. She works as a teacher and is qualified to teach English as a second language.

Shea said: “I never lost interest in Ukraine and I have maintained contacts with and participated in the Ukrainian diaspora here.”

She was particularly inspired by Ukraine’s 2004 Orange Revolution, which brought Viktor Yushchenko to power, and by the mass protests of 2014 that morphed into the “Revolution of Dignity,” which drove Viktor Yanukovych from power.

“I felt such pride that people were fighting to be a modern, democratic European nation and refusing to get down on their knees. I felt I needed to do something to support Ukraine in any way I possibly could,” she told the Kyiv Post.

When Russia invaded Ukraine in 2014, she became involved in collecting and shipping clothes, medicines, and other aid needed by the Ukrainian military and their families and later established a charitable foundation, “People of Ukraine.”

In 2019 she met with five widows of Ukrainian servicemen killed in the fighting against Moscow-backed proxies and regular Russian forces in eastern Ukraine.

The five women were visiting America at the invitation of an organization called TAPS, which stands for Tragedy Assistance Program for Survivors, which assists the families of people killed serving in the U.S. military.

The five Ukrainians told Shea that a big problem for veterans and their family members is finding employment. Shea became convinced a command of English would boost their chances of entering Ukraine’s jobs market.

She devised courses – one for beginners and another for those with some knowledge of English that could be taught using Zoom.  The five-month courses began in September 2019, in a pre-covid age when few had yet heard of Zoom.

She let people know about the free courses using the Ministry of Veterans, and veterans’ groups and information spread by word of mouth or social media.

There are four groups of students; each group has two lessons per week spread over 20 weeks. There are currently 32 students finishing courses in February. The next courses start in March.

Shea provides pupils with written materials as homework practice exercises before each session and, afterward, a summary of the work covered.

She monitors each participant’s work closely to make what she calls “an anecdotal assessment” of their progress. But there are no formal tests.

The participants receive certificates that they have completed the course and which they can show to prospective employers.

The Kyiv Post spoke to some of the past and present pupils. All praised Shea’s courses for being accessible and geared to teaching English as it is used in real-life contexts. 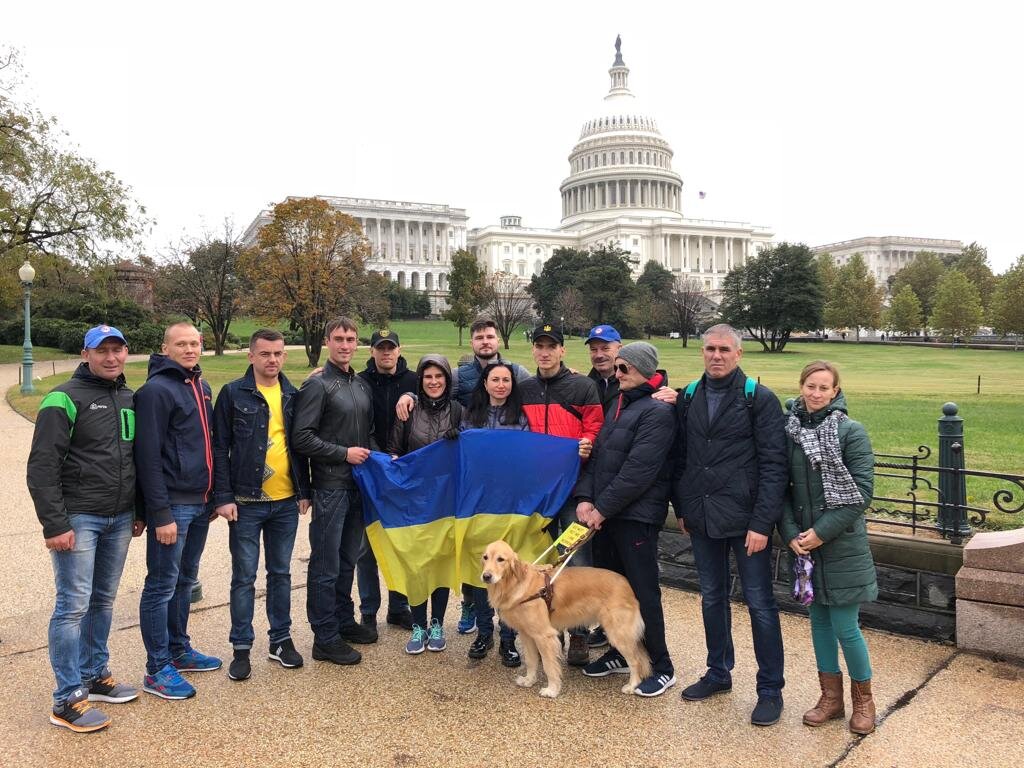 n the picture: Oleksandr Darmoros with his guide dog and other Ukrainians on a visit to Washington D.C. when he was receiving treatment in the U.S.  in 2018 for injuries suffered in Russia’s war against Ukraine.

Oleksandr Darmoros, 35, lost a leg and sight in both eyes when he took the full force of a mine explosion while with his Ukrainian special forces unit deep behind enemy lines in 2016.

After 10 days in a coma and many weeks involving multiple operations in Ukraine, Darmoros was brought, later in 2016,  to the American city of Detroit and examined by a top eye surgeon.

But his condition was inoperable. However, Darmoros received a guide dog trained to accompany blind people and learned to work with it – an immense boon, he says, for coping with everyday life. He was also fitted with a sophisticated prosthetic limb.

Prior to the war, Darmoros had taken some psychology courses at a college. After returning from the U.S. to Ukraine in 2018 he resumed studies to gain qualifications in psychology and now works as a psychologist for the Ukrainian military.

Despite the fact he is blind and cannot read the written materials distributed to other course participants, Tetyana’s lessons focus on the spoken word and she can adapt the lessons to cater to Darmoros’s circumstances.

He said: “Tetyana’s lessons are better than YouTube or audiobooks because firstly nobody is going to point out my mistakes there and they don’t give the sort of language practice offered by her lessons. She explains how people use English in real life.  These courses give me discipline and order.”

He said the lessons inspire him to offer consultations in English and even eventually move to the U.S. if possible.  “She not only allowed me to take part in the course but she ensures that I’m really included. She’s very motivational,” he said.

Yuriy Kopyl, 45, suffered a severe shrapnel wound to the leg. He is married with two children. Since leaving the military he has worked as a specialist using computerization to automize industrial processes in Kryvorih.

He realized he needed English for his fast-changing field of work: “Tetyana’s courses deal with practical uses of English which I need as a programmer.”

Another incentive to improve his English is linked to his determination to overcome his war injuries by competitive powerlifting and cross fitness. And to compete in international competitions, he said, English is needed.

Dmytro Utkin, born in Kyiv, is 35 and married with two children.  He spent six months in 2015 as one of the legendary defenders of Donetsk Airport, dubbed “cyborgs” by their Russian enemies amazed because the Ukrainians kept fighting, despite overwhelming odds and severe casualties, much longer than anyone imagined they could hold out.

He left the army in 2016 and has a job as a marketing manager for Petcube Inc., a Ukrainian startup producing innovative high-tech gadgets for pet owners away from home to observe and care for their cats and dogs and even diagnose medical problems.

Although Utkin had a reasonable command of English from his schooldays, he realized he needed to improve it for working with companies that all use English to communicate.

He said “English for me is a tool to effectively communicate with top stakeholders, contractors, our design team, and American companies like Amazon and Walmart. So English is an essential skill for me and Tetyana teaches people to use that language in real-life personal and professional circumstances.

“I very much appreciate Tetyana’s help and the opportunity she has offered me and other veterans. What she is doing is really great.”

Svitlana Guba is one of the five Ukrainian widows Shea met in 2019 through the TAPS organization and is also about to finish her five-month course.

Her husband, Major Yakiv Guba, was killed at the age of 29 in August 2014 during the intense and brutal fighting at Ilovaisk, the eastern Donbas city under Kremlin control.

The couple had a son, now 13. Guba, who is 34, works as the secretary to the chief doctor in a large hospital in the city of Dnipro, the eastern provincial capital of 1 million people located 482 kilometers southeast of Kyiv.

After being introduced to TAPS on her trip to America, she helped form a Ukrainian TAPS organization.

Guba explained that knowledge of English is necessary for many aspects of the medical and administrative work in large hospitals:

“The English language is important for professional reasons.  For instance, it means that I don’t need a translator. It opens doors.”

She added that Tetyana’s course has brought other positive things into her life: “Learning the language also represents personal development and that’s very important. Before I didn’t understand anything and now I feel more confident. I will apply for the advanced course.”

Shea plans to provide three-month courses in basic computer skills with 23 veterans already signed up for the first one due to start this month.

However, whereas Shea and another volunteer teach English for free, she will have to pay fees to some of the computing tutors and to rent computers for those who cannot afford their own – for a total of $8,000.

She has approached some American businesses for donations and is being supported in her search for funds by the US-Ukraine Business Council.

The USUBC has more than 200 members and works to advance U.S. companies’ trade and investment interests in Ukraine and provide links to America for Ukrainian companies.

Its president, Morgan Williams, praised Shea’s courses and said that those taking part gained skills that increased their value to any prospective employer. “It’s obvious to me that if you are dealing with international clients, having English skills would be a huge benefit and a real plus on anyone’s resume,” he said.

Andy Hunder, president of the 500-member American Chamber of Commerce in Ukraine, said that military veterans are valued as disciplined and trustworthy employees in America and have much to offer Ukrainian employers.

He said: “These are people who sacrificed so much and bringing them back to the workplace is something employers should see as something of great benefit.

“Employers look for leadership skills and military veterans are real leaders.  They have discipline and willingness to take on responsibility. In a workplace environment, I think these are skills that any employer should cherish.”